These Russian ‘Squirrel’ cakes will drive you nuts with delight (RECIPE) 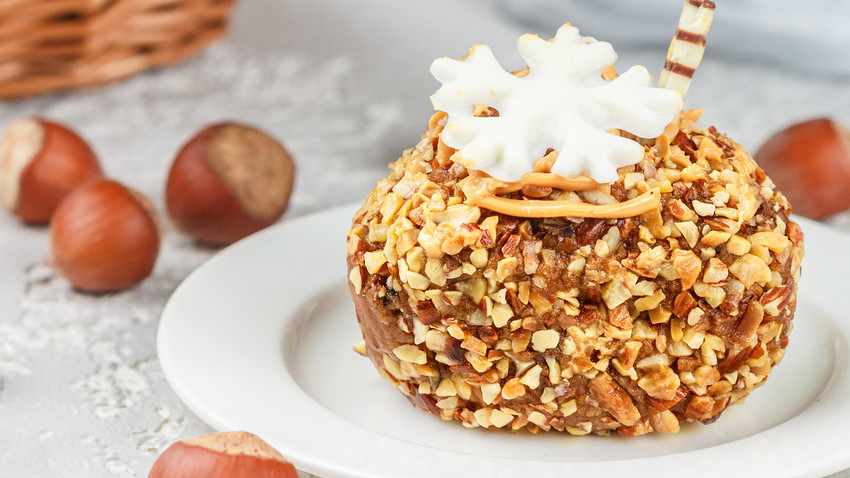 You’ll fall in love with a tender taste of these desserts!

Legion Media
Affectionately called 'Belochka', this Soviet-era dessert is a culinary miracle, great for celebrations or just to enjoy with a cup of fragrant tea.

Nowadays, it’s complicated to trace the story behind this amazing sweet treat. But one legend says that the first recipe for the cakes by the name of "Belochka", appeared by chance in the Caucasus. Strong family bonds are a main pillar of their local society and that’s why all celebrations are held on an ambitiously large scale. So, one day when a family was preparing for a wedding, and had to come up with new food ideas to surprise the guests, these amazingly tasty ‘Belochka’ cakes were created. Due to the easily available ingredients and an effortless cooking process, this dish became popular nationwide.

This tasty delight became so adorable that in many other places it acquired other names, such as  “Tenderness” (“Nezhnost”), “Hedgehog” (“Jozhik”) or “Angelica”. Even though the name is sometimes different, older people recall these cakes with utmost love and nostalgia for the Soviet Union.

Those people who lived during Soviet times remember these small cakes displayed in the glass case of cafés and pastry shops. While these desserts were baked at home, children especially loved the moment when they were trusted to roll the cakes in crumbs.

Though tastes differ, the recipe hasn’t changed greatly since it was created. The entire process of cooking will take approximately an hour or a bit longer. So let’s get started! 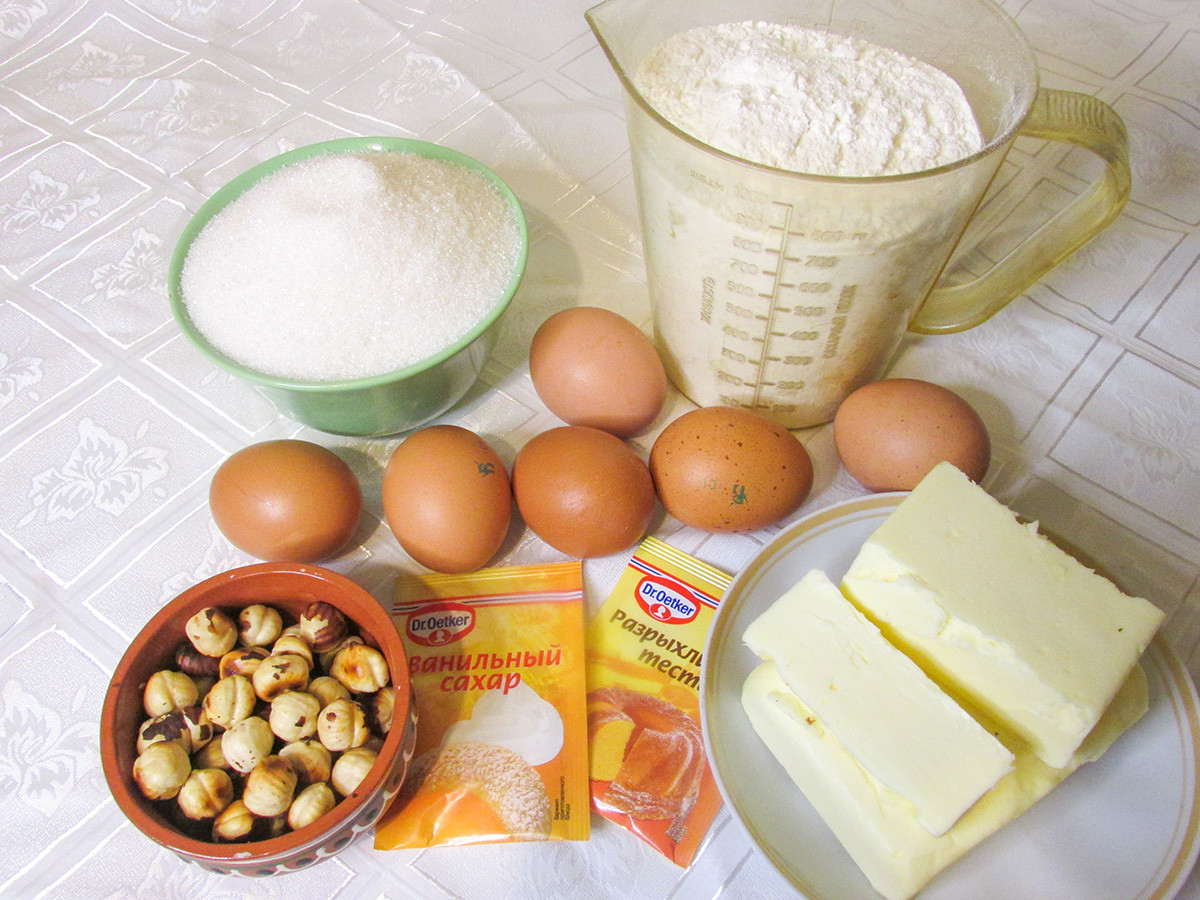 Ingredients to make the cream: 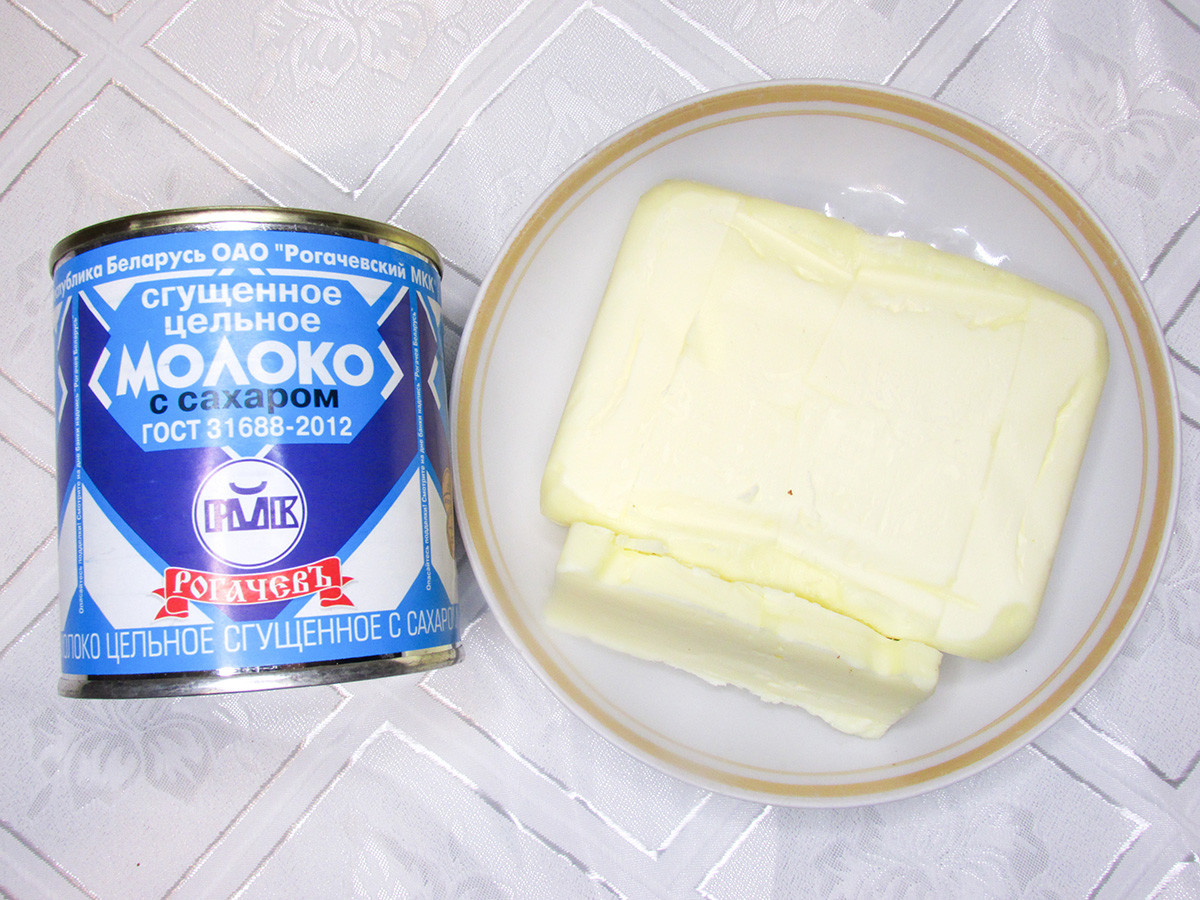 1. Have all the ingredients measured out and ready to use. Make the following preparations: a) Melt the butter (250 gr) and let it cool slightly; b) Mix flour with the baking powder; c) Dry the nuts in a pan and chop - the chopped pieces should not be small. 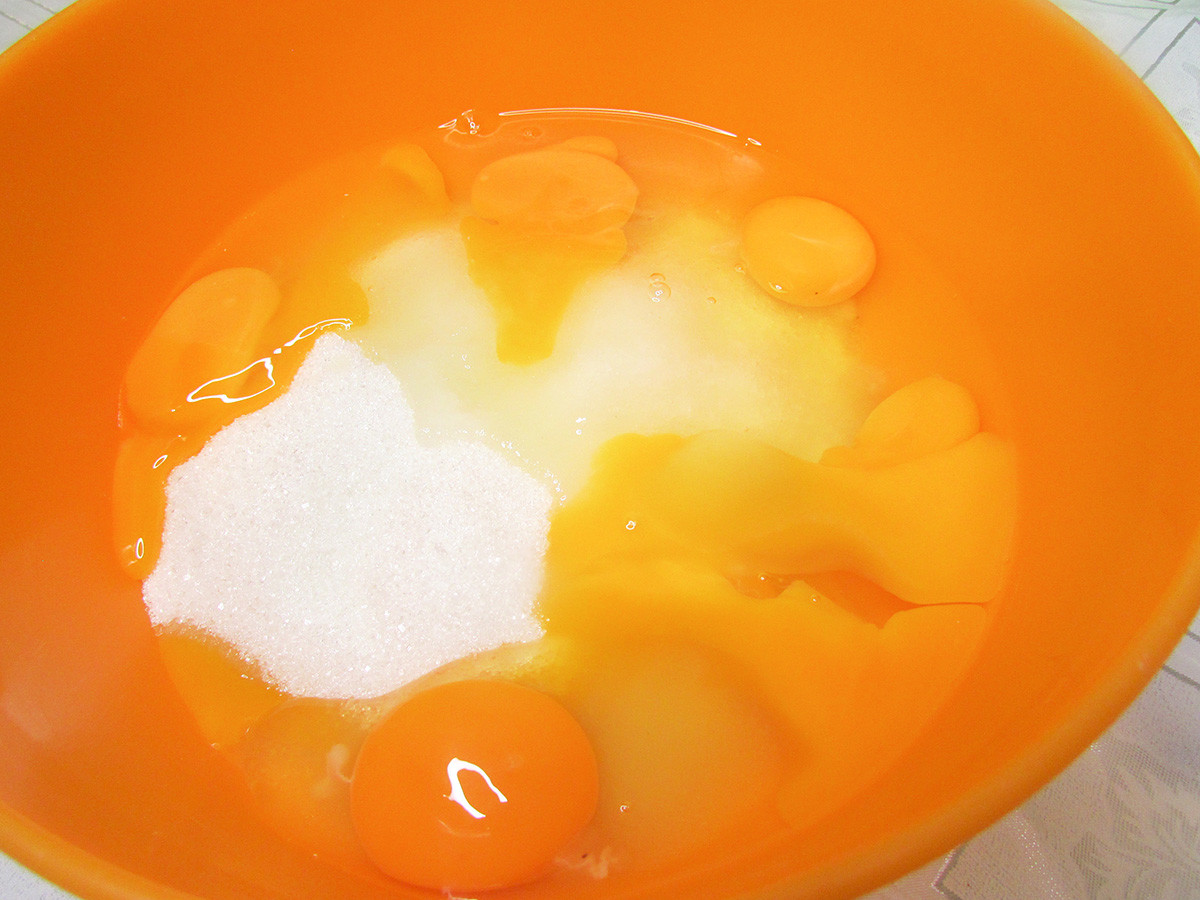 2. Whisk the eggs into a separate bowl and mix well, gradually adding sugar with vanilla sugar. It’s preferable to use a mixer. 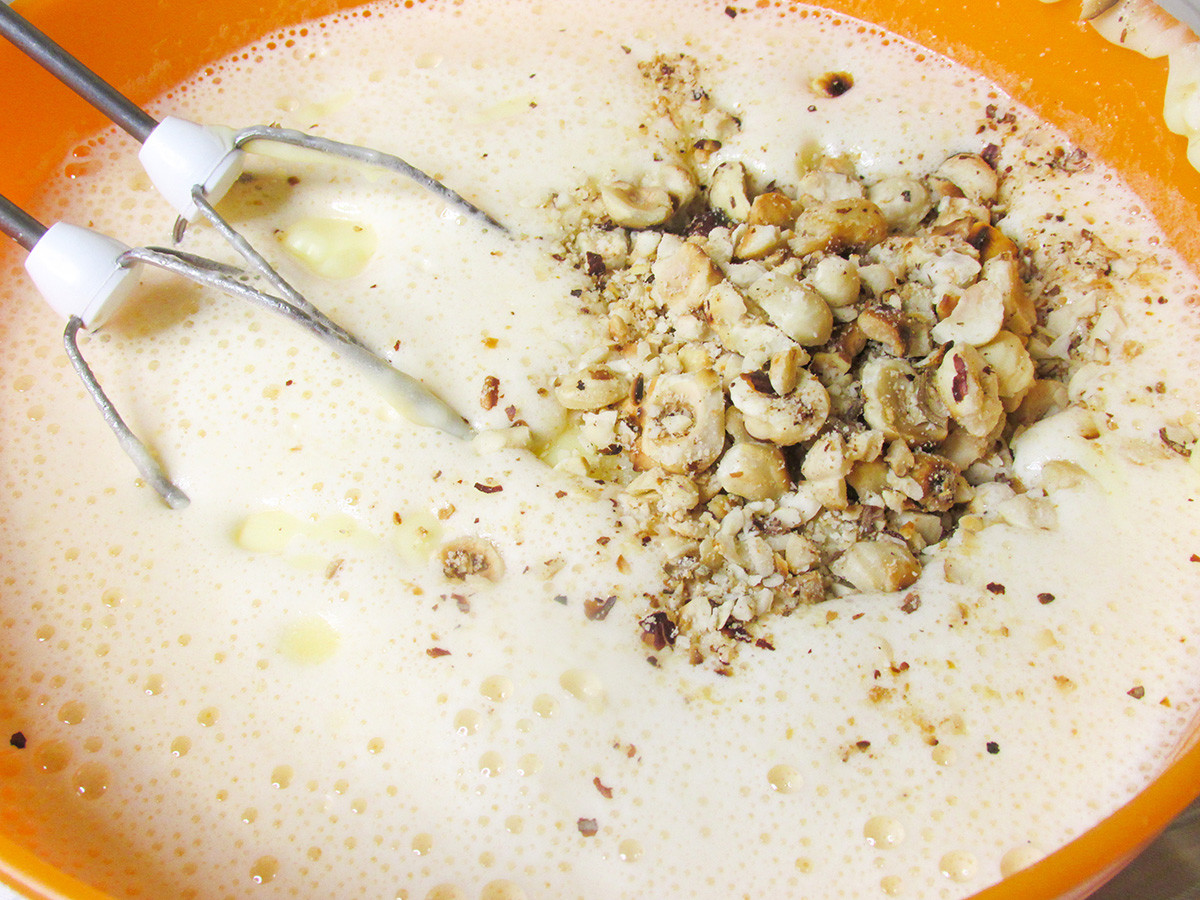 3. Turn the mixer to low speed and start adding other ingredients.  Pour in the melted cooled butter as well as nuts. Mix everything well. 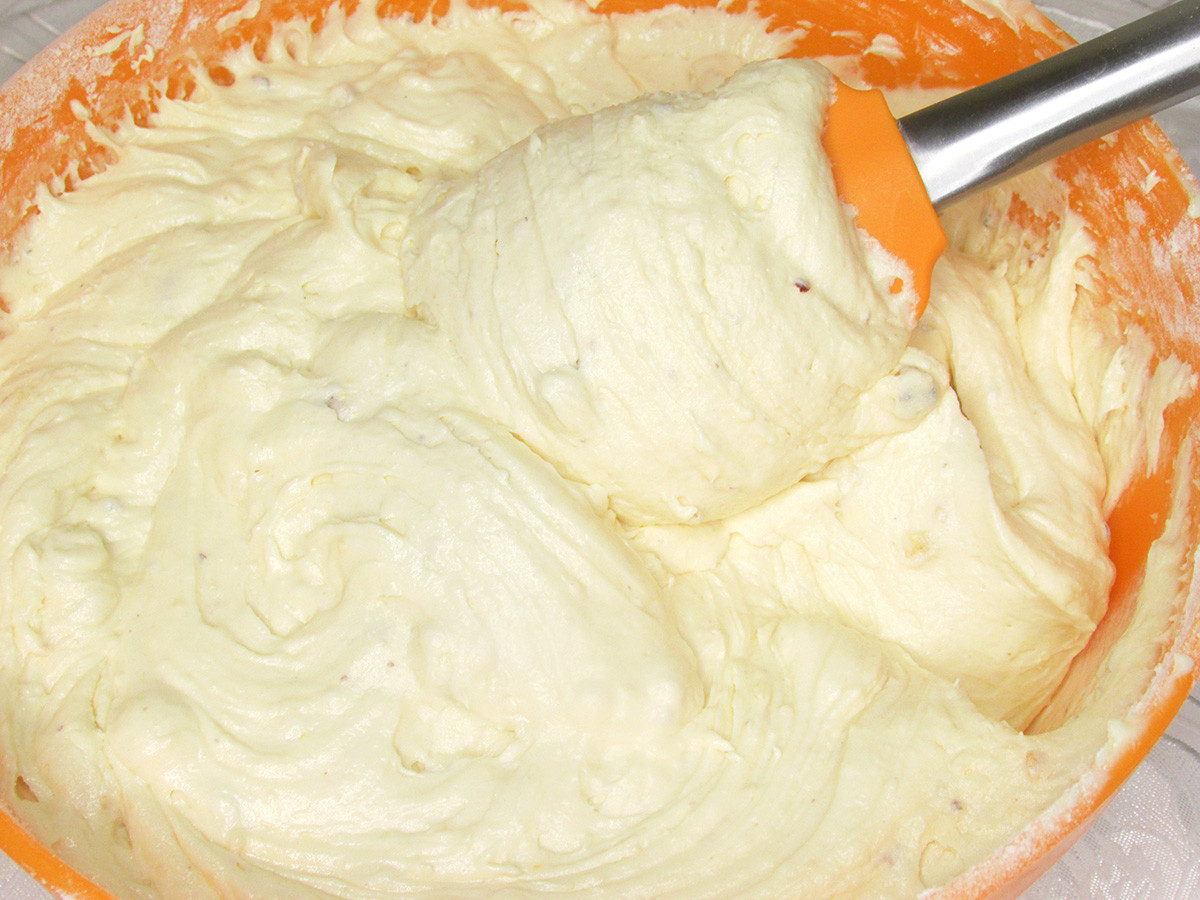 4. Add the flour with the baking powder portionwise, constantly mixing until evenly distributed. The dough’s consistency should be medium, i.e. not thick and not thin. Pay attention to the photos attached.

5. Cover the bottom of your baking sheet with baking paper or parchment that has a diameter of 30 × 40 cm; pour the mass onto it and distribute evenly over the entire surface with a spatula. Preheat the oven to 180 degrees Celsius and bake the large cake for 25-30 minutes. 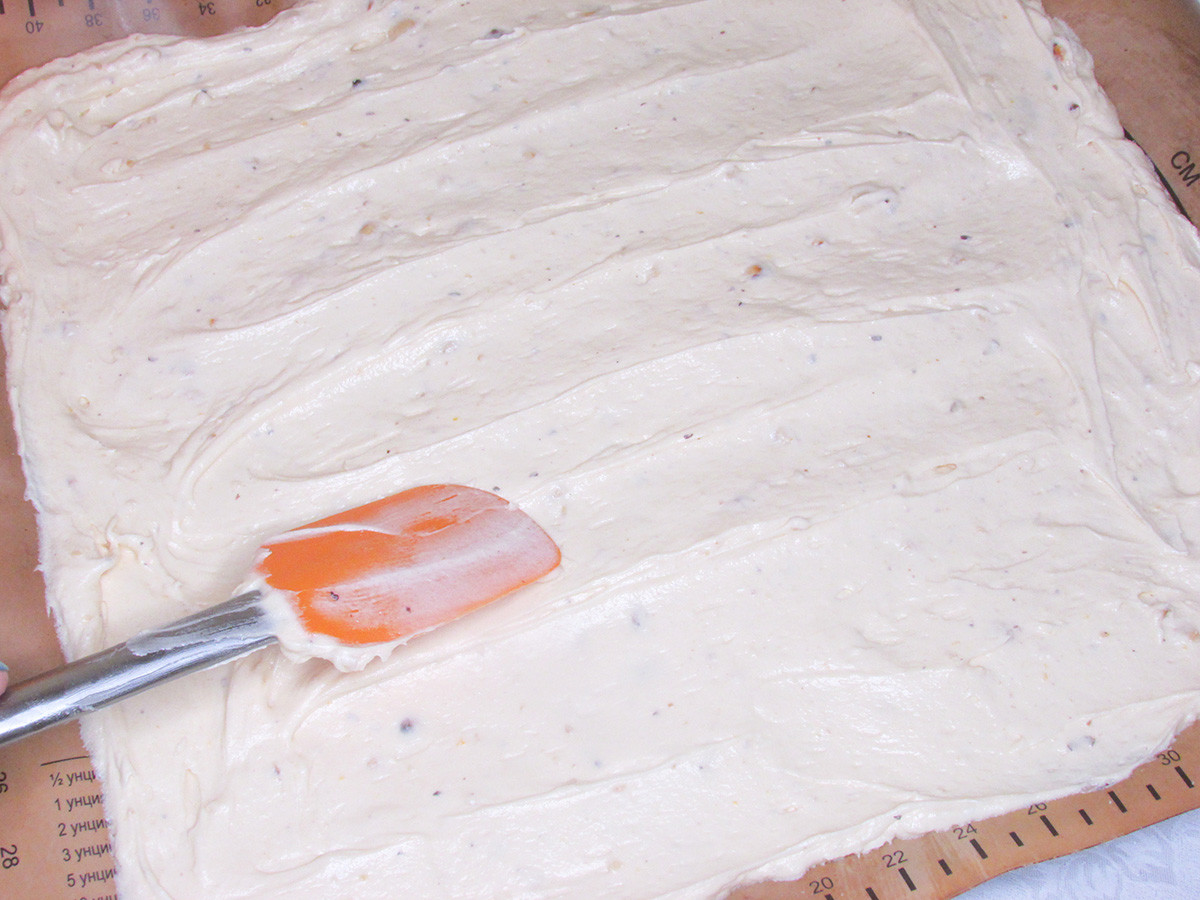 6. Whether or not the cake is ready can be determined by pressing in the middle. If your finger does not fall through, then everything is fine. Put the cake on a wire rack and let cool. 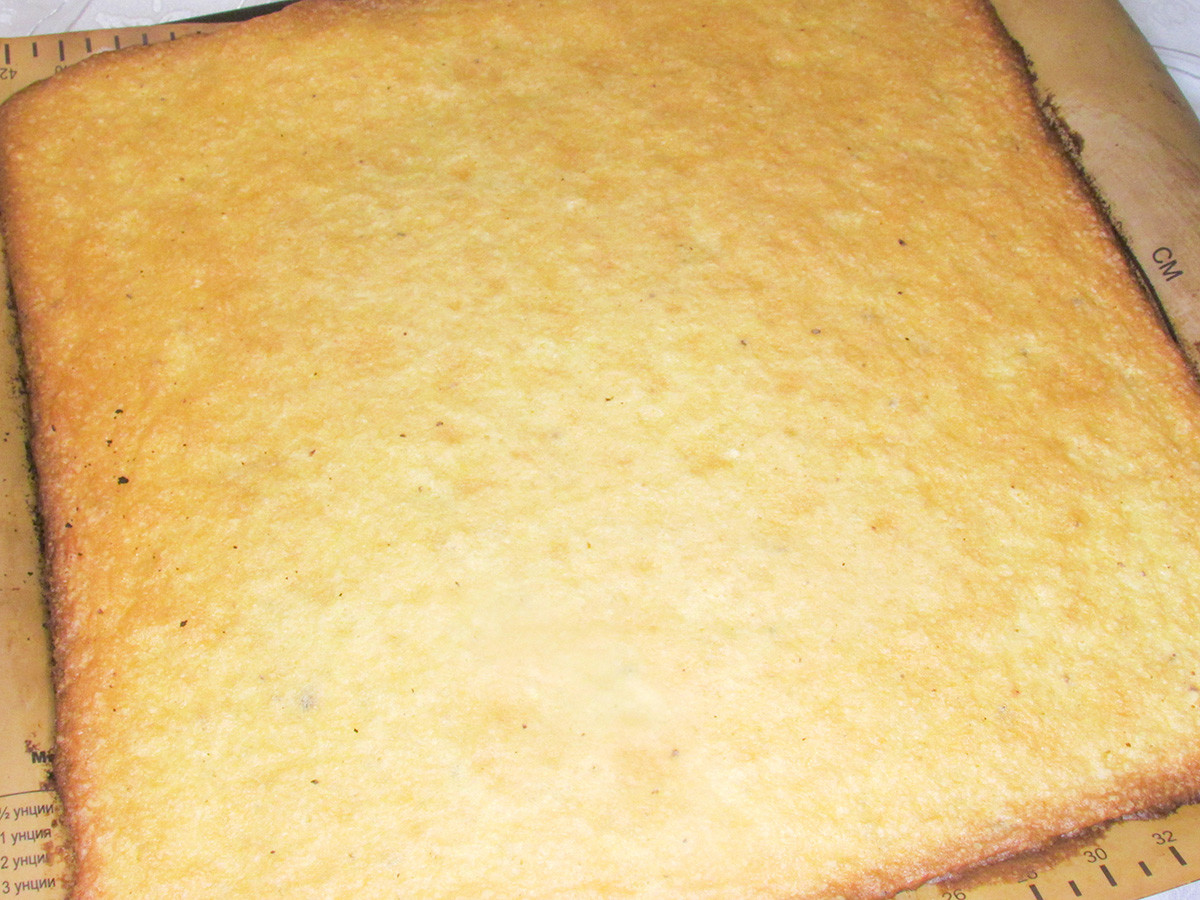 7. Let's move on to preparing the cream. Beat the condensed milk in a separate bowl with a mixer and start adding pieces of butter to it portionwise. Remove the butter from the refrigerator beforehand to make it soft. Continue to mix the mass until you have a homogeneous cream. 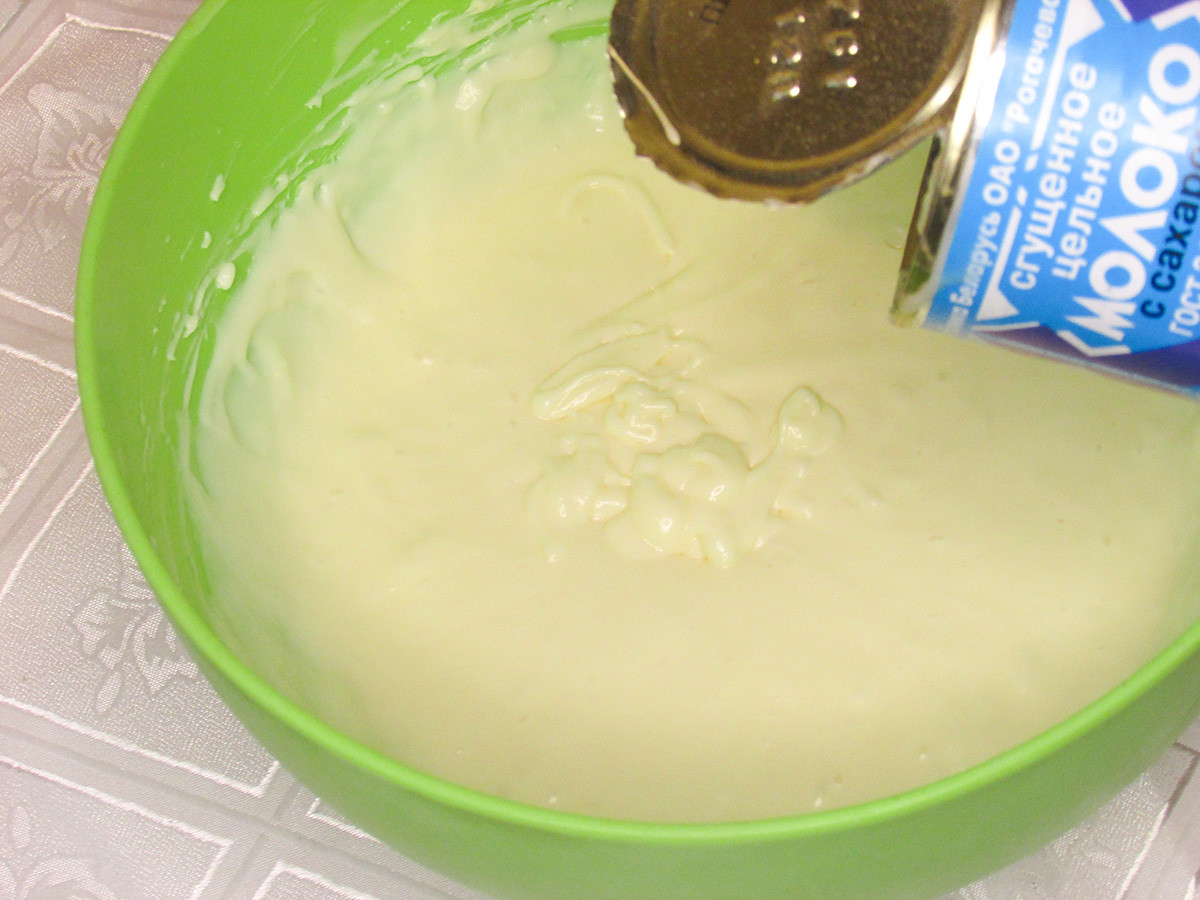 8. Cut the cooled cake into small circles. Grind the cuttings into crumbs in a separate bowl. You’ll get approximately 30 small cakes that need to be cut in half lengthwise. 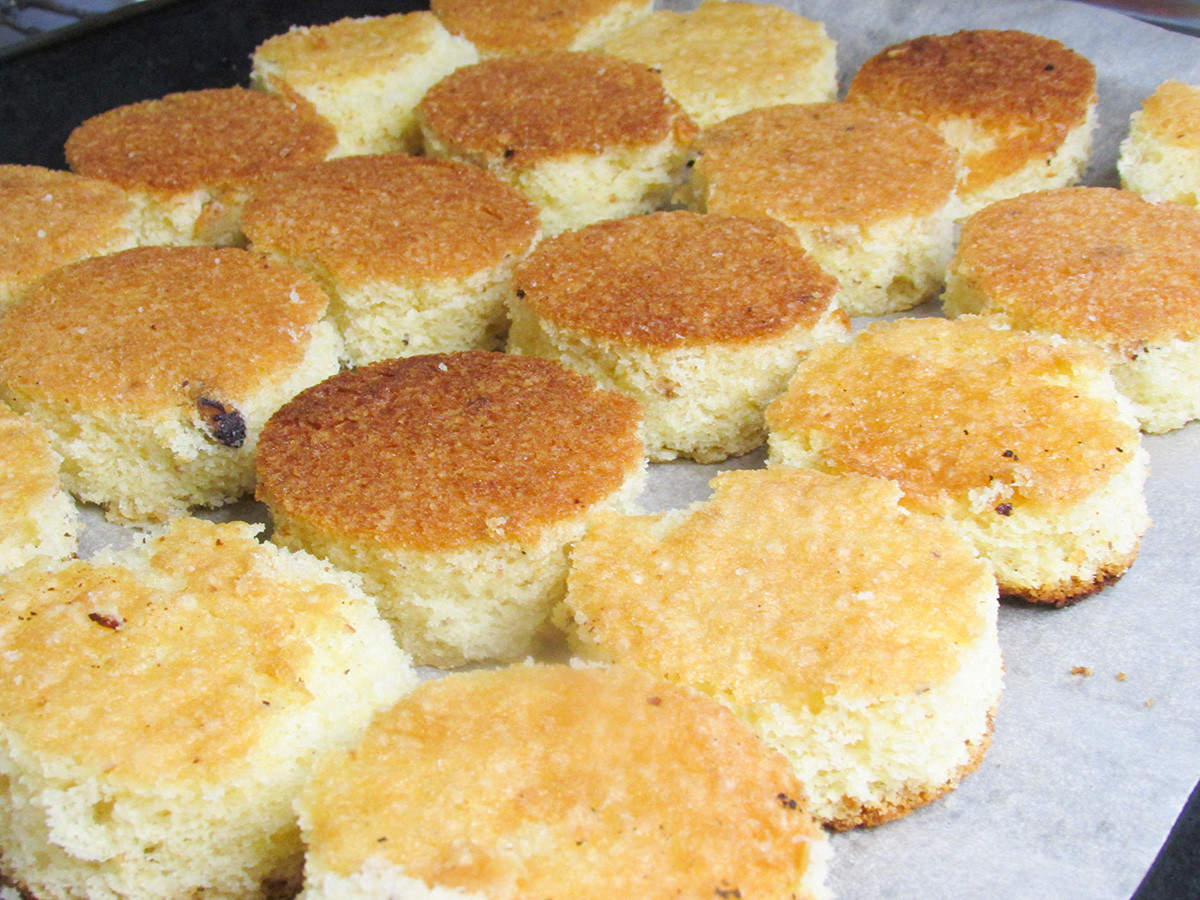 9. Put the cream (one teaspoon) on each lower half. 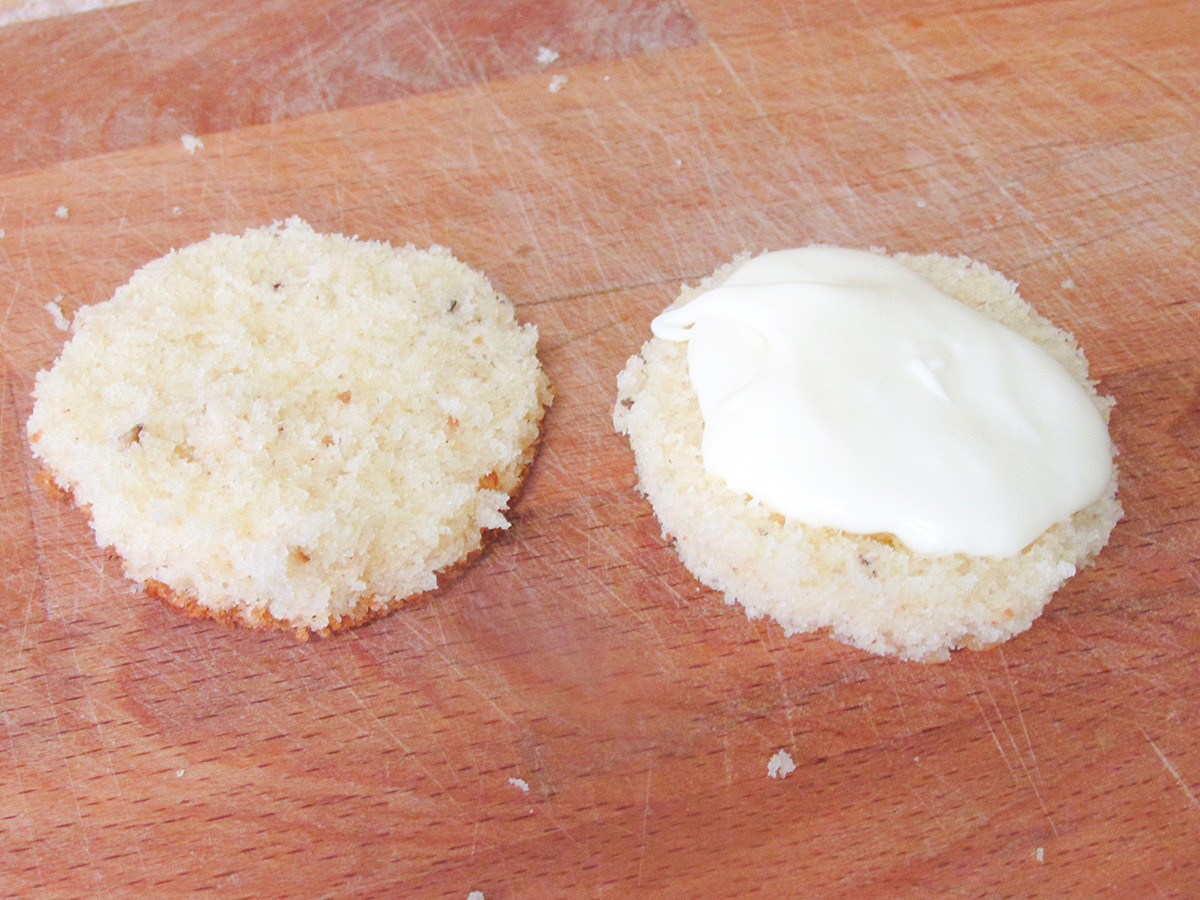 10. Grease the sides of the cakes and cover the top with additional cream and eventually roll each cake in crumbs. 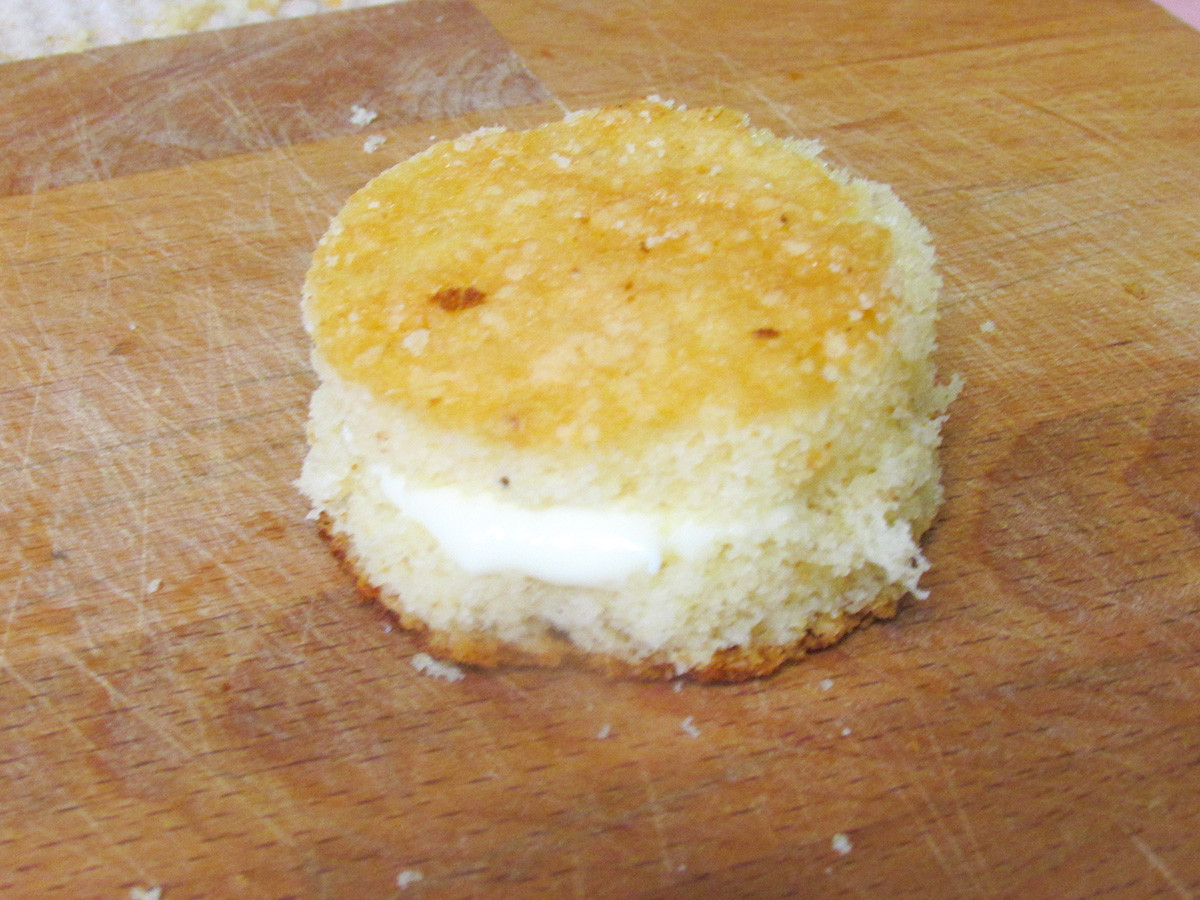 11. Repeat with all the small cakes. Put your “Belochka” in the refrigerator for a couple of hours so the cakes are saturated in cream and become tender and soft. 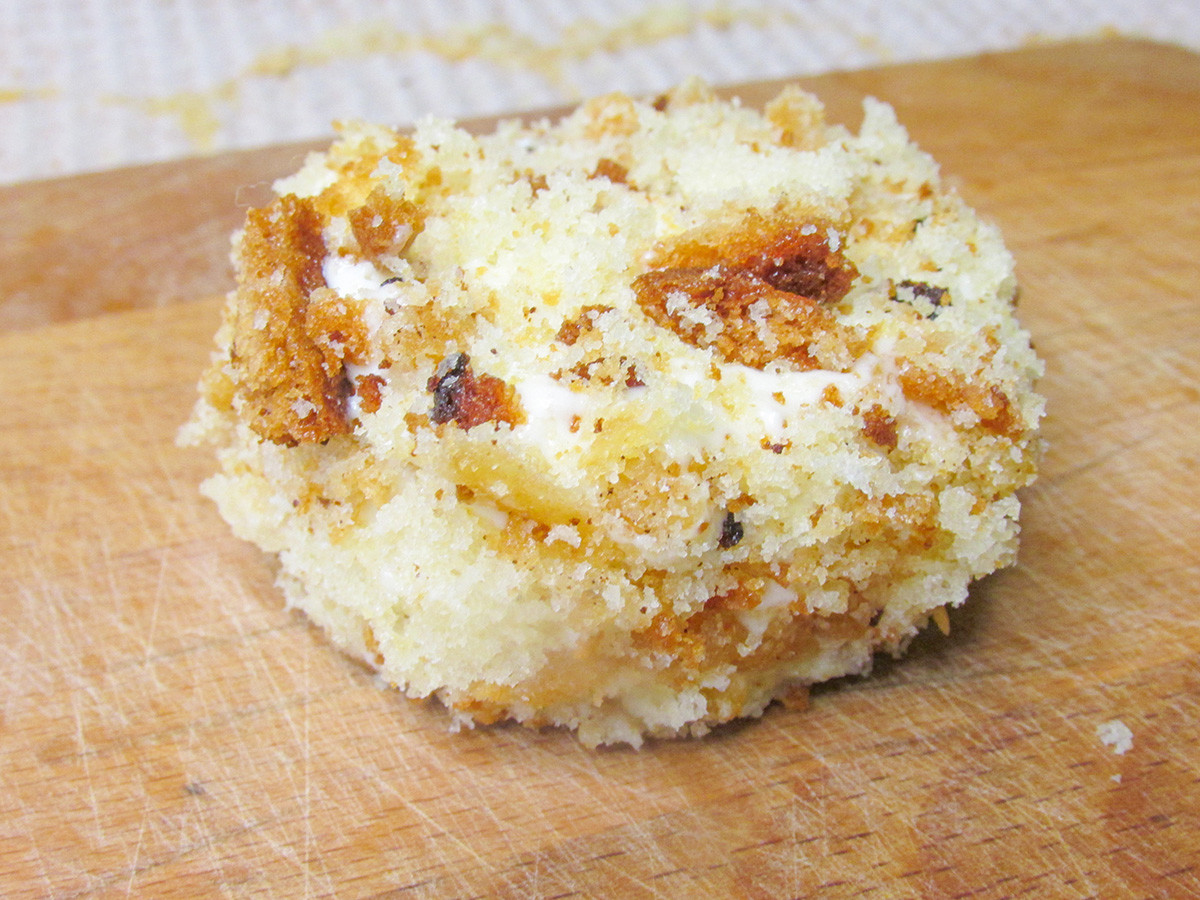 12. Take the desserts out of the refrigerator and let them warm for 10-15 minutes before serving since they contain butter cream. Enjoy them with tea, coffee or milk! 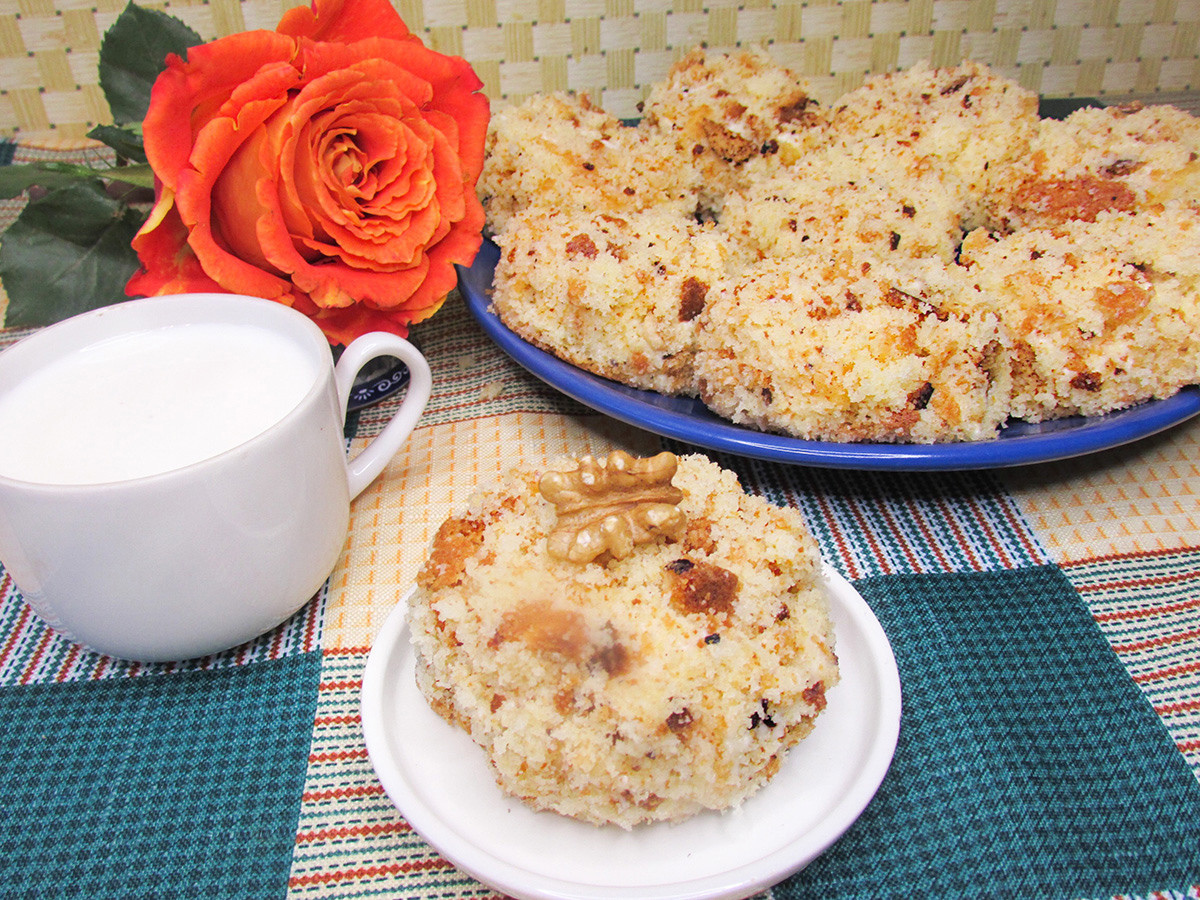