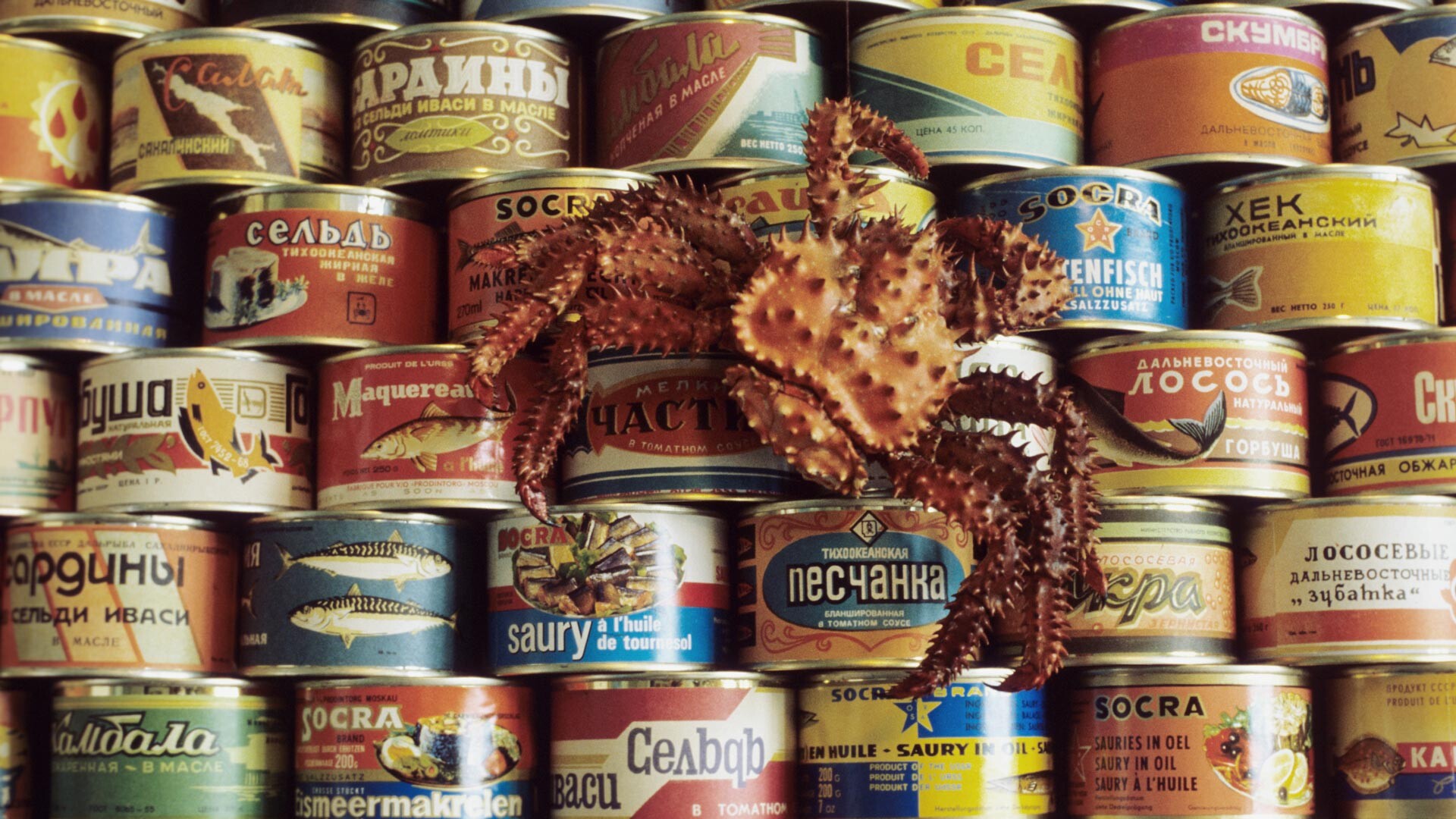 Canned seafood from the Sakhalin Region.

Sergei Metelitsa/TASS
On top of the commonly used goods, the Soviet industry also manufactured canned food with tastes hard to imagine. Take a guess what is hidden inside a “camper’s meal”?

If the iconic ‘The Book on Tasty and Healthy Food’ is to be trusted, starting from 1937, the range of Soviet-made canned food totaled 700 items. Our previous story on canned water used for emergencies by sailors or submarine crews was not the only unusual canned food of the time. 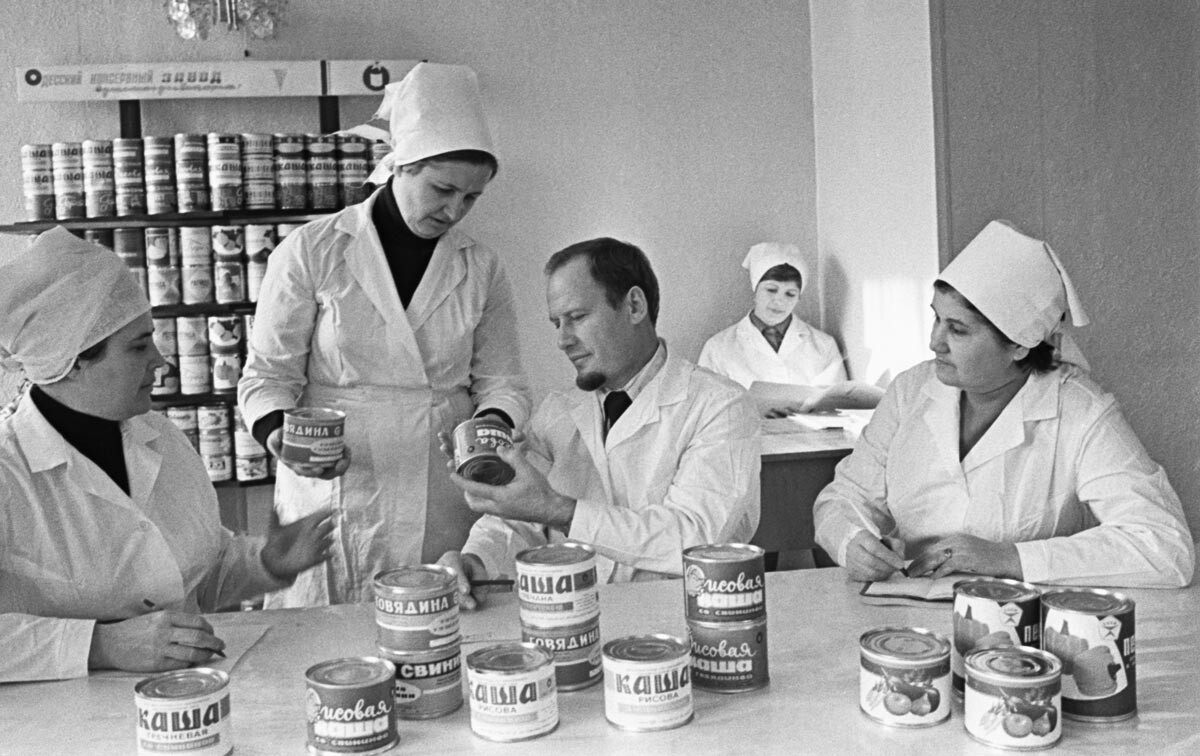 Buckwheat popularity in Russia is unparalleled to any other country. It is eaten in a variety of forms, with sugar and salt, and even cutlets are made from it.. Despite the fact that buckwheat doesn’t even need to be boiled, but simply steamed with hot water for a couple of hours, canned buckwheat could often be found on Soviet shelves. In most cases, it was cooked with pork or beef. Campers and travelers were the main consumers: it could easily satisfy hunger after long hikes, and it could be warmed up right in the jar, dipped in boiling water for ten minutes. It was even nicknamed “camper’s meal” (sometimes, canned food was produced under this name and could simply consist of stew or fish meatballs). Only natural ingredients were used and the food could be preserved for up to two years. Canned porridge is still sold today, and not only buckwheat, but also barley and rice. 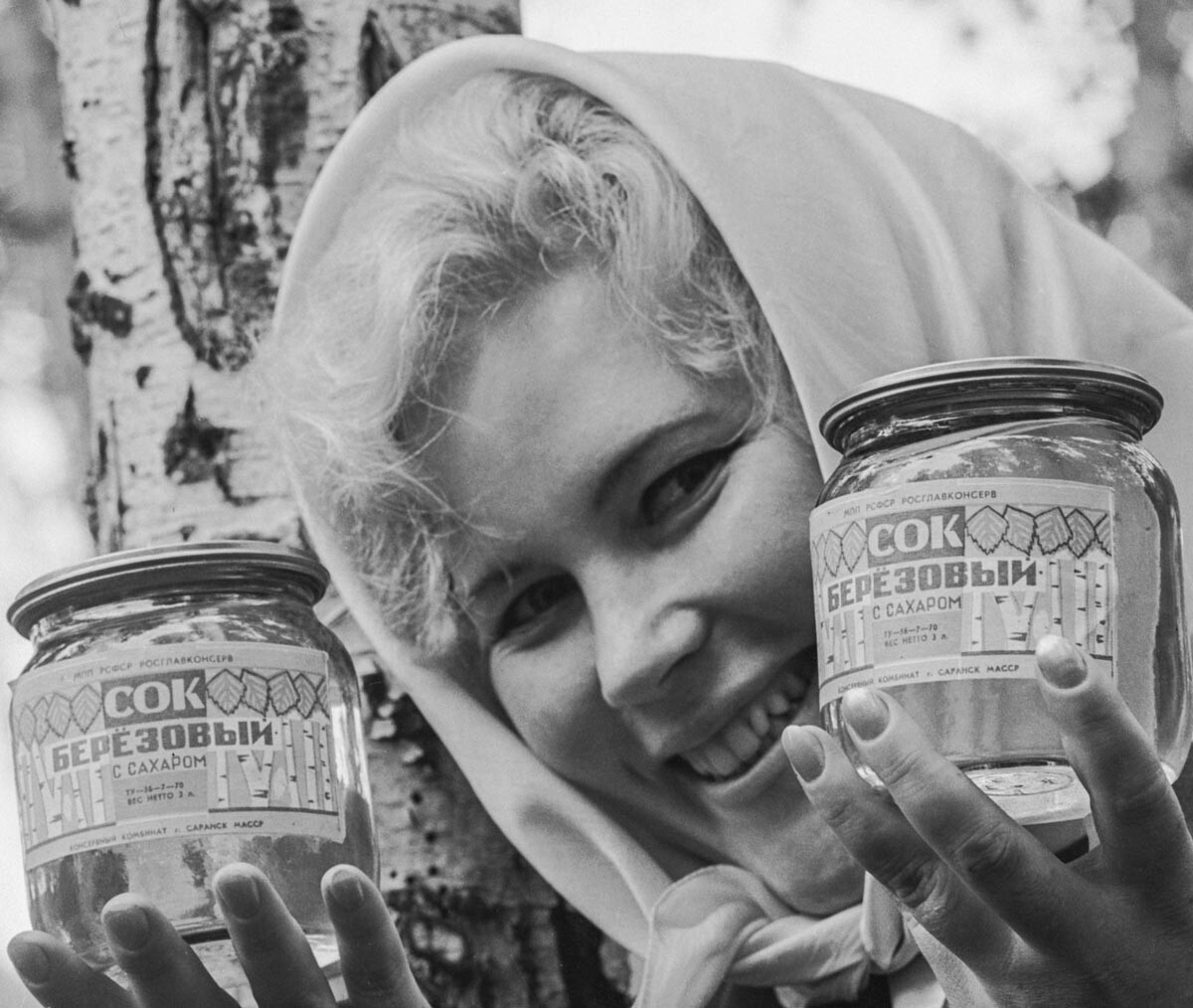 Collecting birch sap was a favorite pastime for many Soviet citizens (and still is for many Russians today). But if there was no desire to go early in the morning to the spring forest, then birch sap could be found in the nearest store. Somewhere it was sold on tap, like today soda at food courts, and somewhere - right in a tin can. 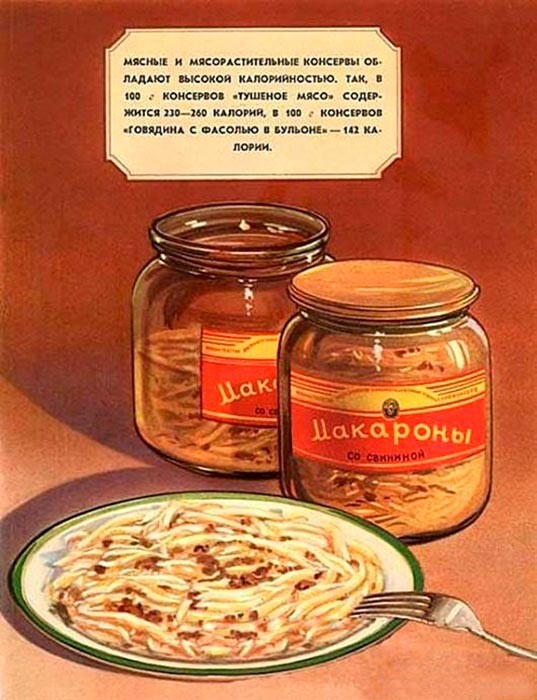 Pasta rolled up in a jar was designed to solve the problem of “kitchen slavery”. These semi-finished products were listed in the canned food catalog in the late 1950s and they were immediately produced with meat. On sale were canned pasta with beef, pork, chicken pate and chicken stew. 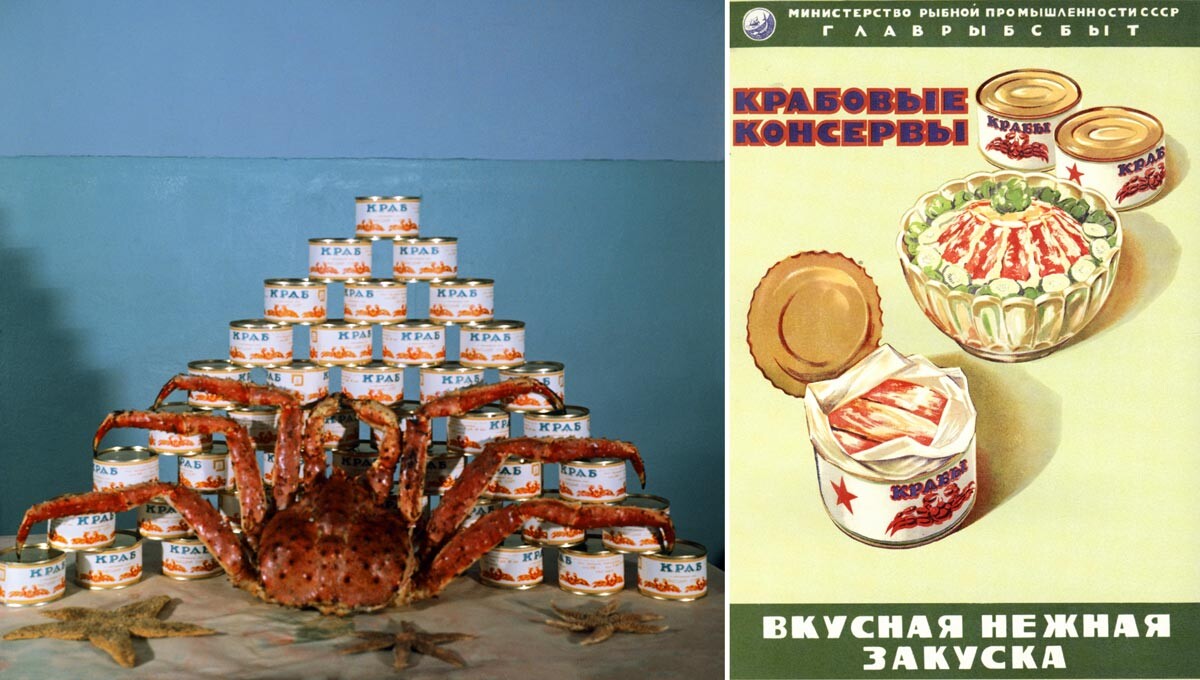 A huge part of the Soviet canned food was dedicated specifically to fish: sprats in oil, gobies in tomato, pink salmon in its own juice. But, besides this, they also produced canned Kamchatka crab in the USSR, which is expensive today. In Kamchatka, even special crab fishing vessels worked - literal floating canning factories. 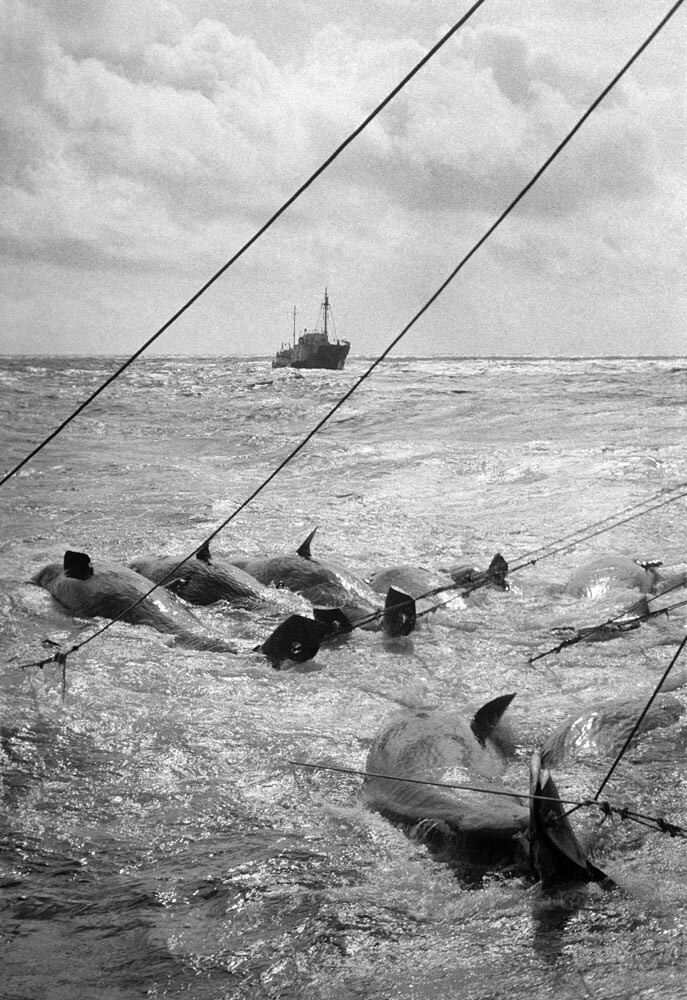 Whaling was banned in 1987 in the USSR. But, until that time, canned whale meat could be seen on sale.

“I tried canned whale meat a couple of times,” writes blogger Maxim Malyavin from Tolyatti. “Somehow it resembled beef stew, only more tender - and it was just meat. Then, no matter how much I searched the store shelves, I never found it again. It disappeared somewhere, but never reappeared.” 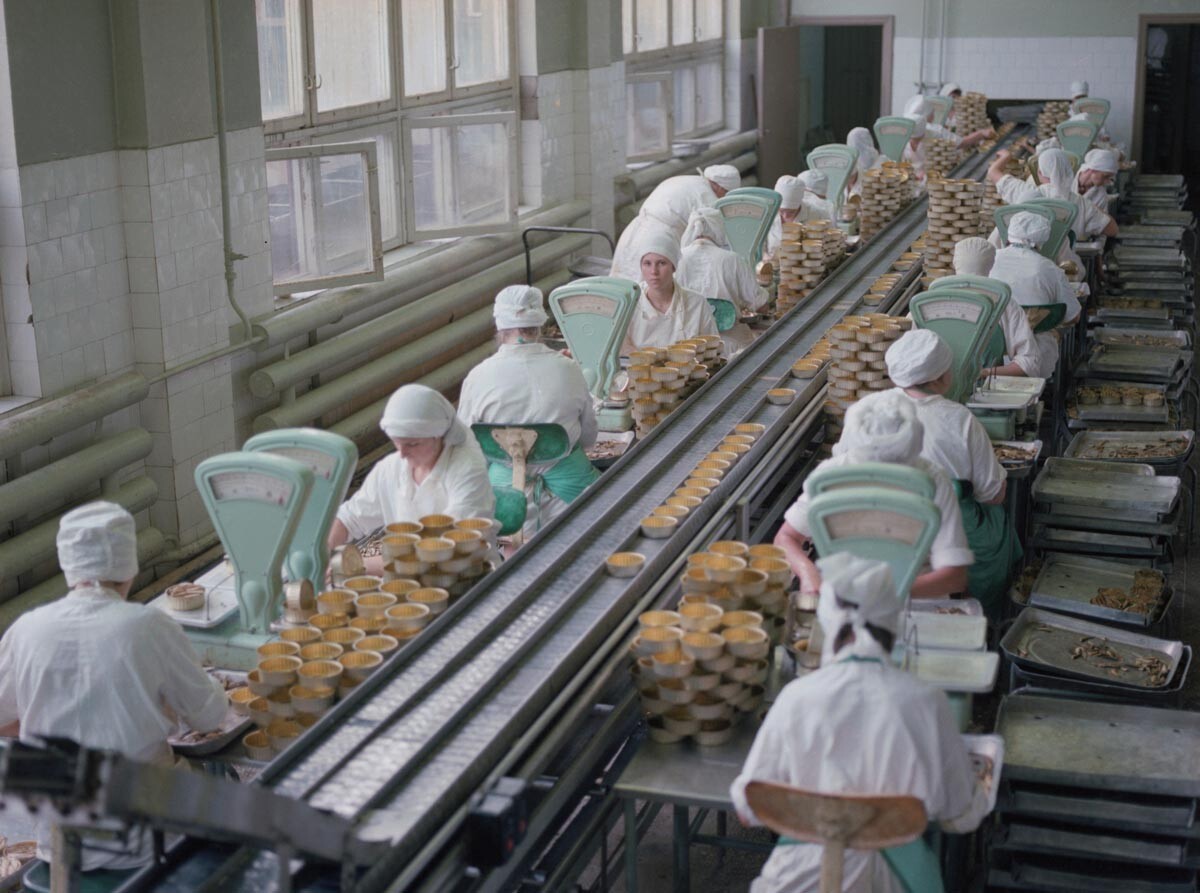 Krill are small crustaceans used mainly for fodder. In the late 1960s, the Soviet Union came up with Ocean paste and canned meat. Initially, people were confused as to how krill could be used for cooking, but advertising persuaded them into trying. Krill proved to be a tasty and healthy spread for sandwiches with only natural ingredients - krill and salt. Krill meat looks like that of tiny shrimp and the taste is more salty and “fishy”, which seafood lovers will appreciate. 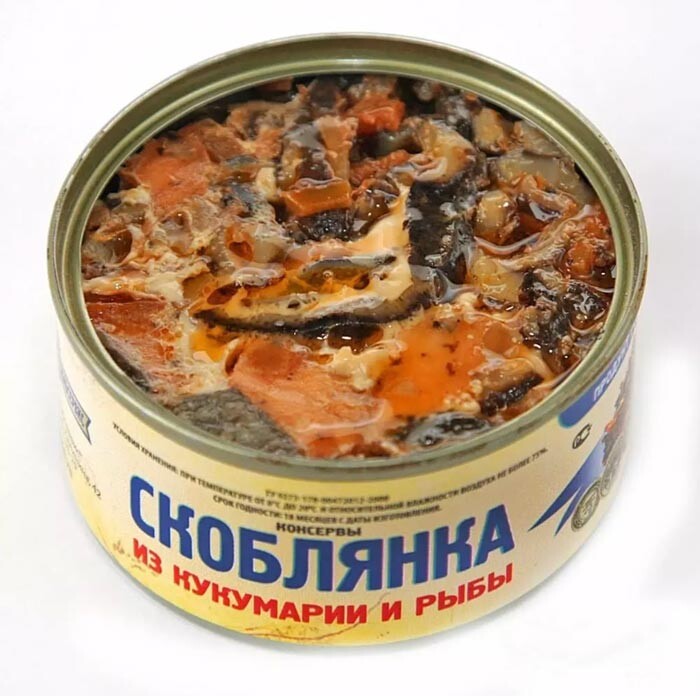 One of the strangest (but very popular) Soviet foods is cucumaria or sea cucumber. It looks as unpresentable as possible, but this mollusk helps those who have problems with the thyroid gland. It was extremely rare to see it fresh, but canned cucumaria periodically appeared in the fish departments. 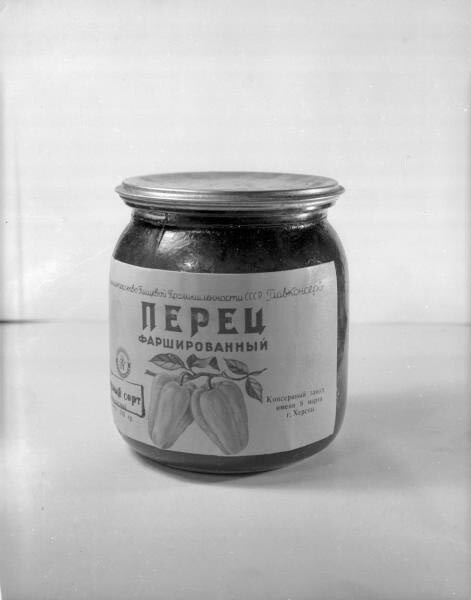 Pepper stuffed with rice and minced meat is still an insanely popular dish in Russia. In the Soviet days, stuffed peppers were produced as a ready-to-cook dish, which only required heating before serving. 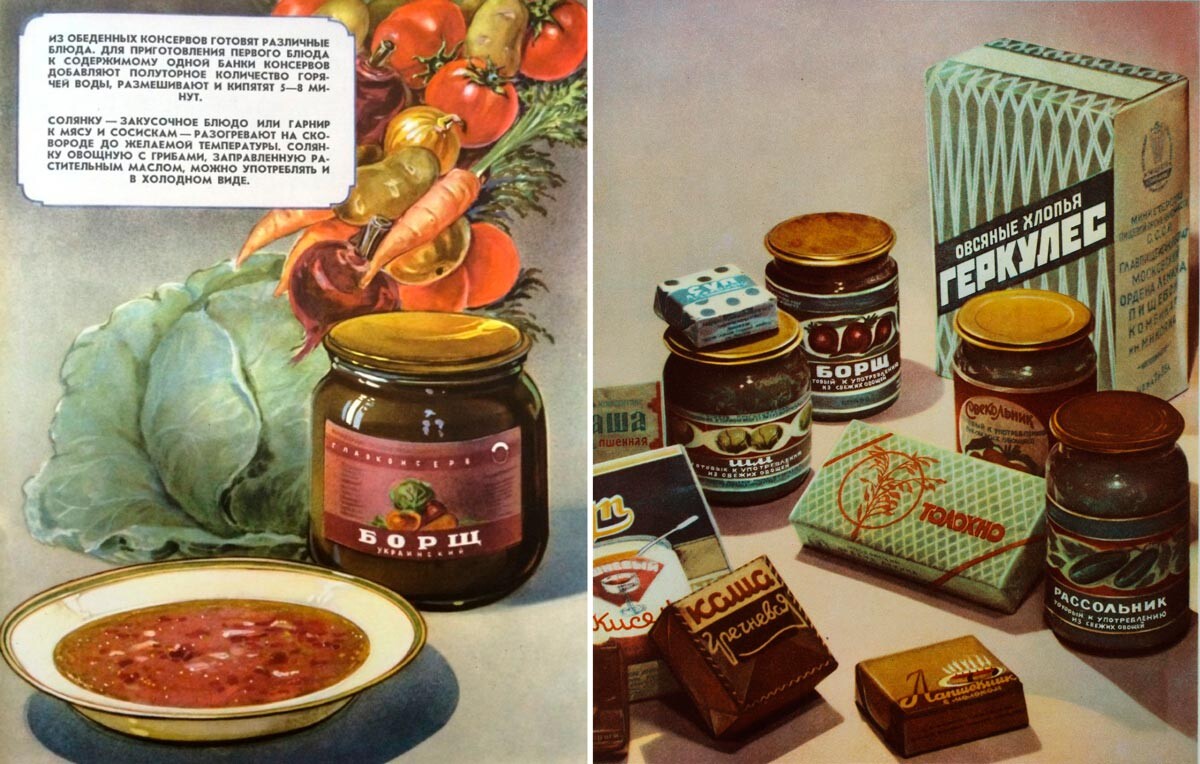 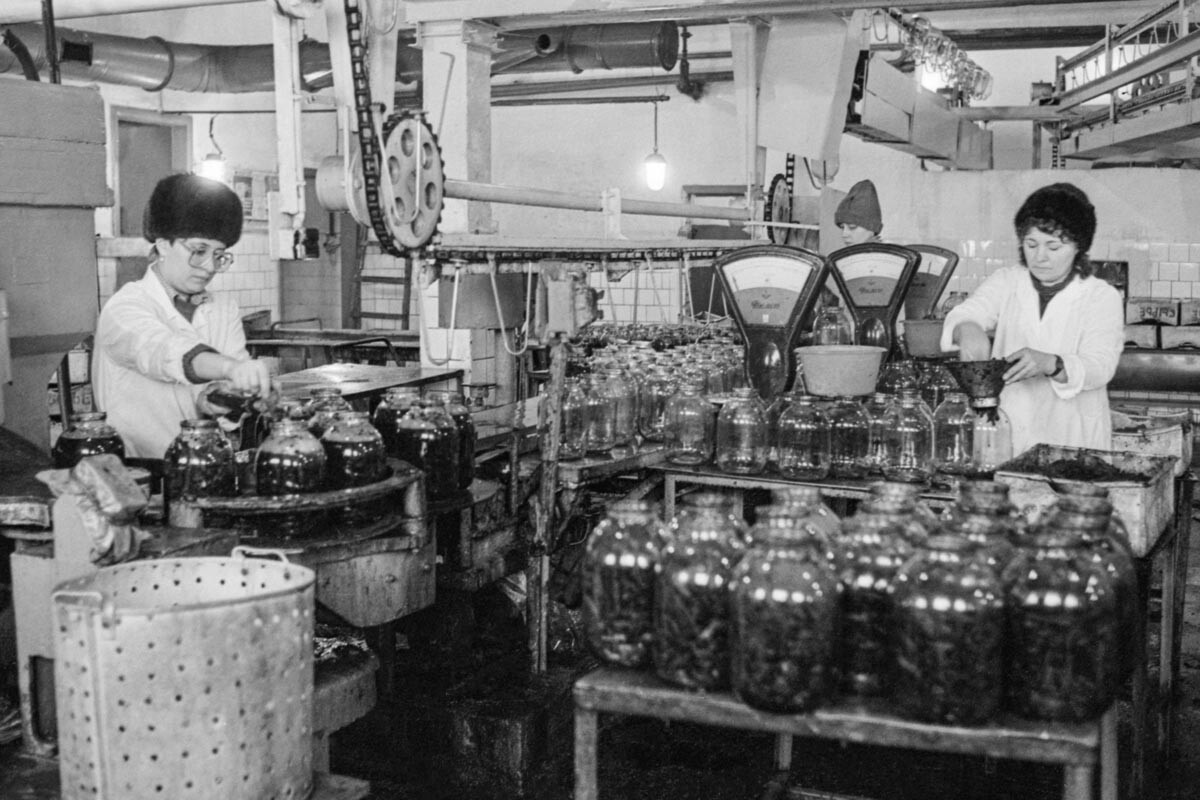 Many Russians still remember the taste of squash or eggplant spreads, which were very popular in the USSR. However, in addition to these vegetables, beets were also rolled into jars and not only spread was made from it, but they were also simply pickled in pieces.