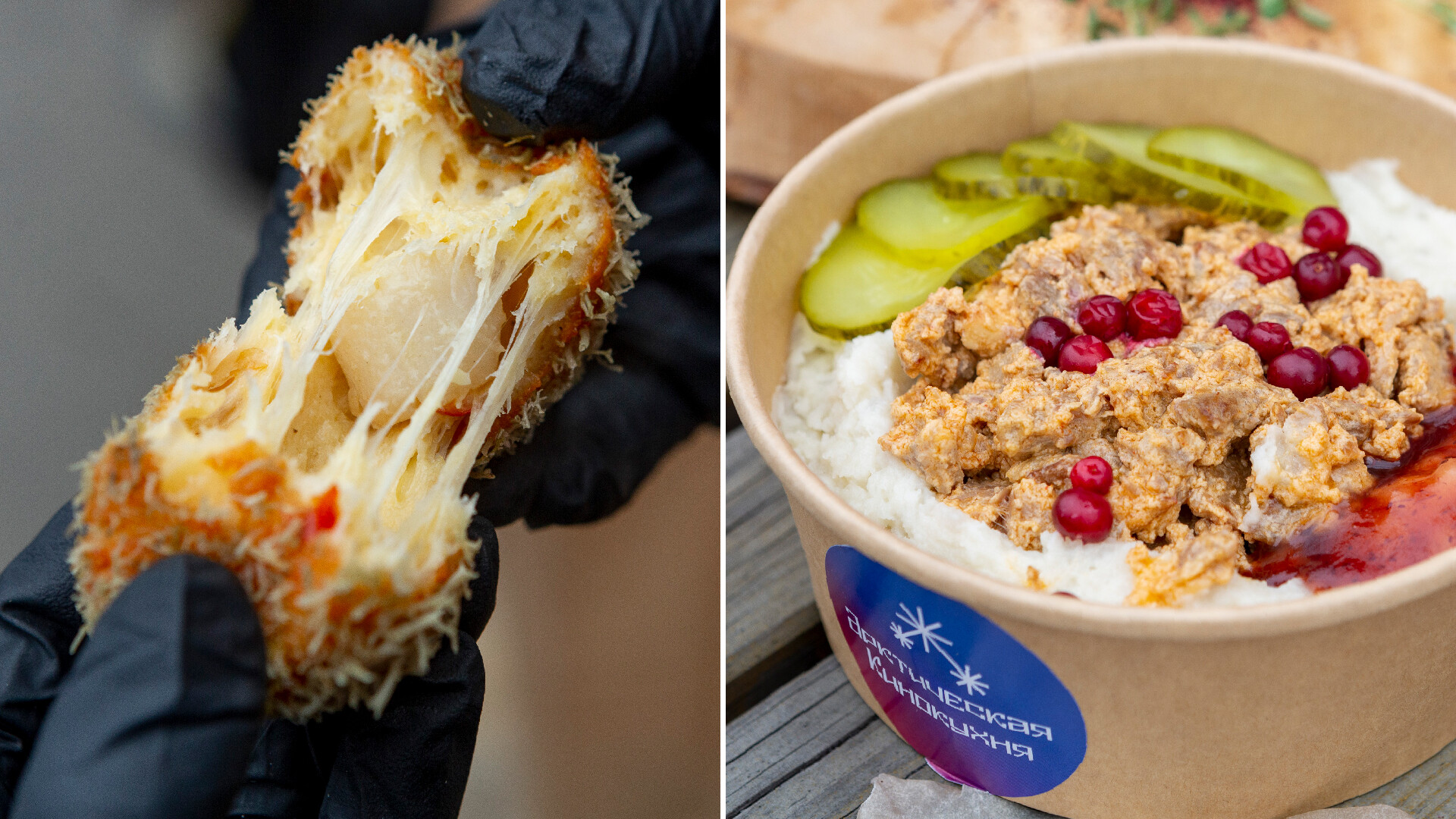 Gastronomic map of Russia
In Murmansk, the largest city above the Arctic Circle, local cafes reinvented the concept of street food, adding a “Polar” flavor to pirozhki and blini.

Contemporary Arctic street food has taken the best from the traditional cuisine of the Nordic peoples and presented it in a new interpretation. In Murmansk and neighboring towns above the Polar circle, people can taste unusual street food at local festivals and fairs. 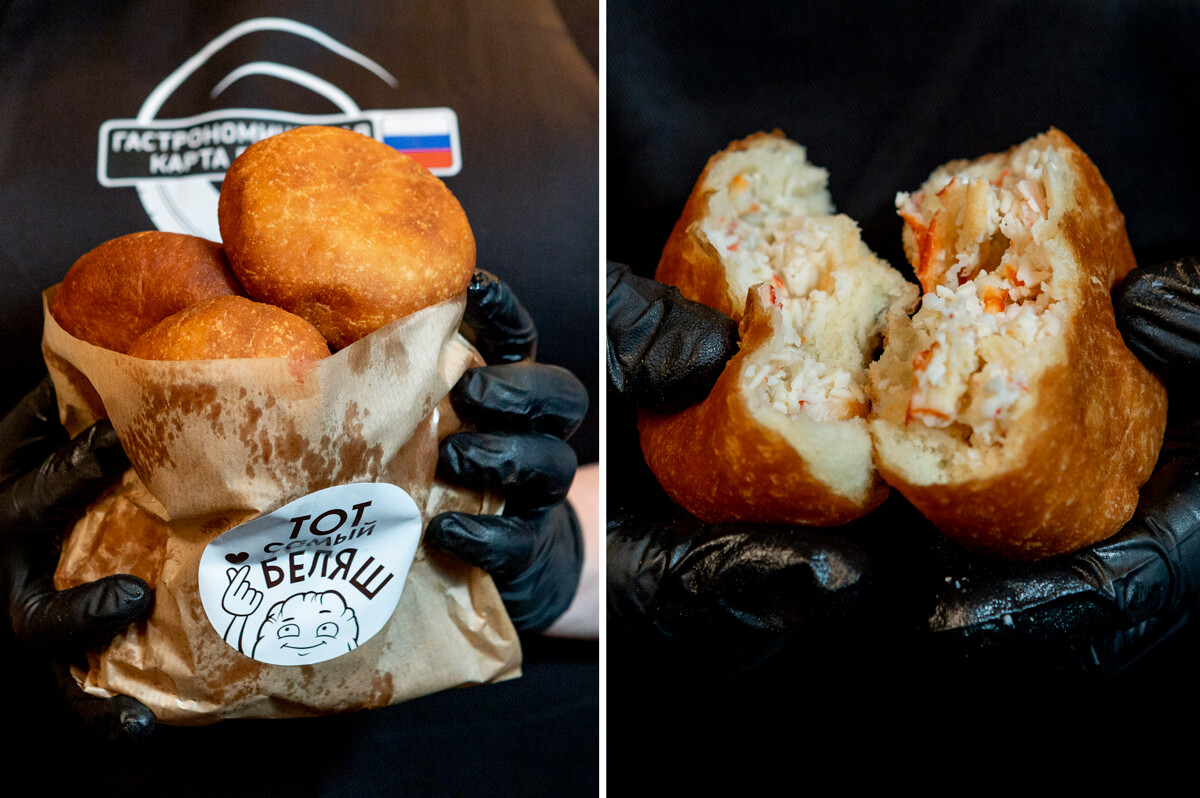 Belyash is one of the most popular dishes for a quick snack in Russia. It’s a fried round pie, usually stuffed with minced meat, but, in Murmansk, you can find a belyash filled with crab. It’s prepared by local restaurant Gray Goose, which specializes in Arctic cuisine specially for the local urban fairs. And there are always big lines to their food trucks! By the way, the belyash with crab won top prize at the gastronomic ‘Arctic Cinema Cuisine’ festival, held in Murmansk at the end of May 2022. 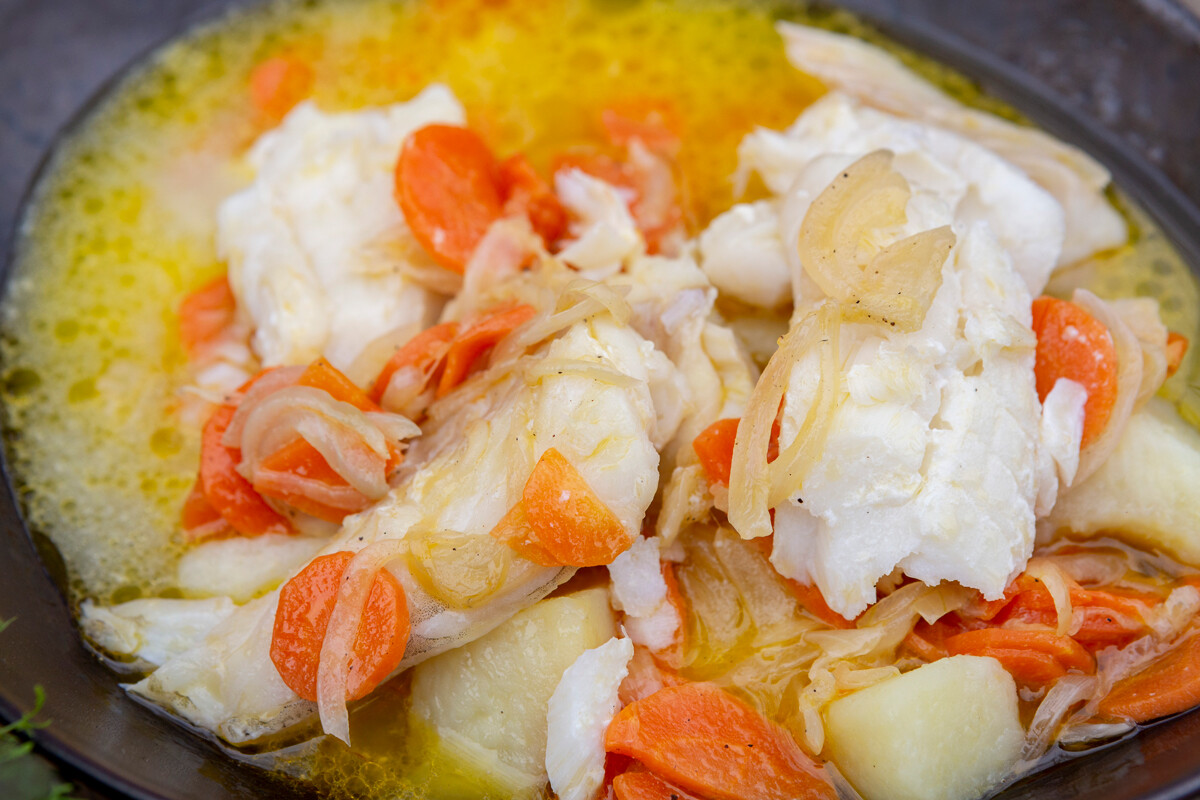 This, at first glance, unpronounceable word is for a dish that’s something between fish stew and soup. Zaiburikha is a traditional dish in the cuisine of the Pomor people. It’s boiled fish (most often cod) with potatoes, carrots and onions and sometimes with broth. You can find it on the menu at the Teribersky Bereg tourist complex on the Barents Sea coast and also try it at Murmansk fairs in a street food format. This is very northern food, which helps to keep warm in cold weather. 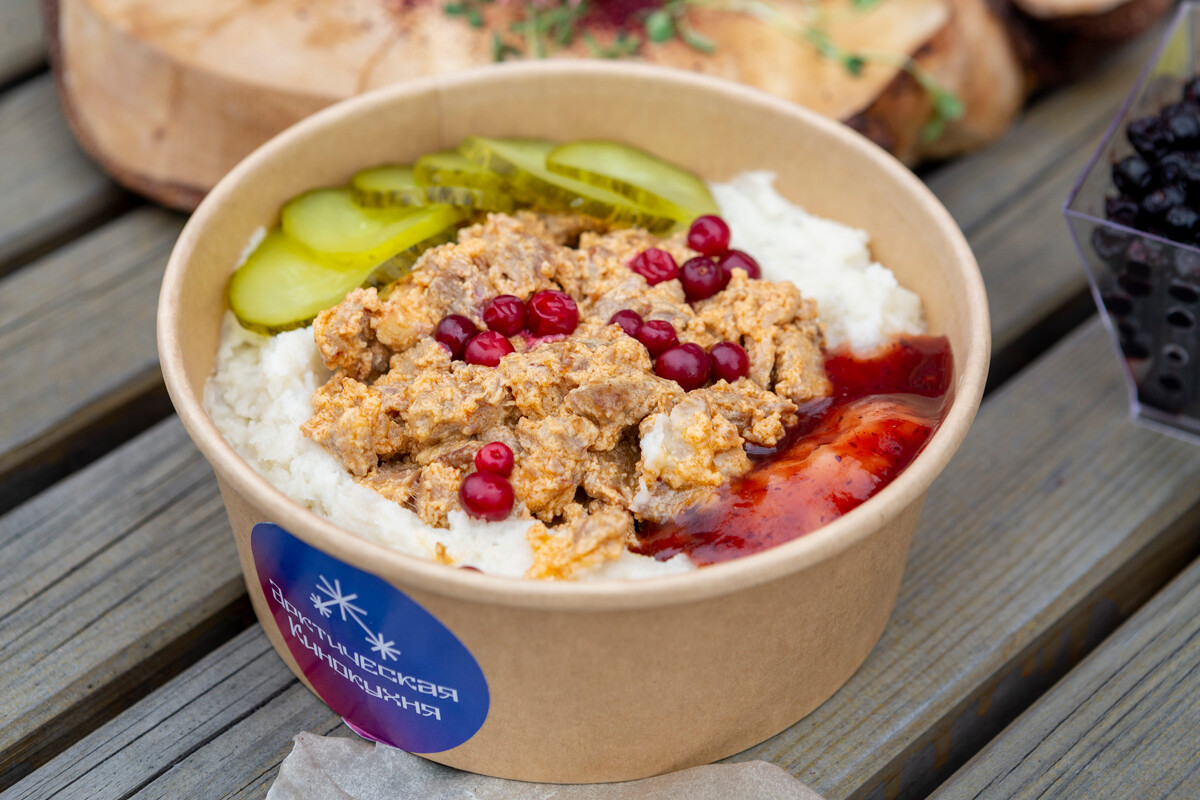 The famous Russian dish Beef Stroganoff in the Arctic version - made with venison. The founders of the ‘Mr. Black’ burger food truck from the town of Zapolyarny invented this dish specifically for city events. The recipe sounds simple: a layer of mashed potatoes, slices of venison in a creamy sauce, some lingonberries and sliced pickles. Served in a round kraft box a poke-style. 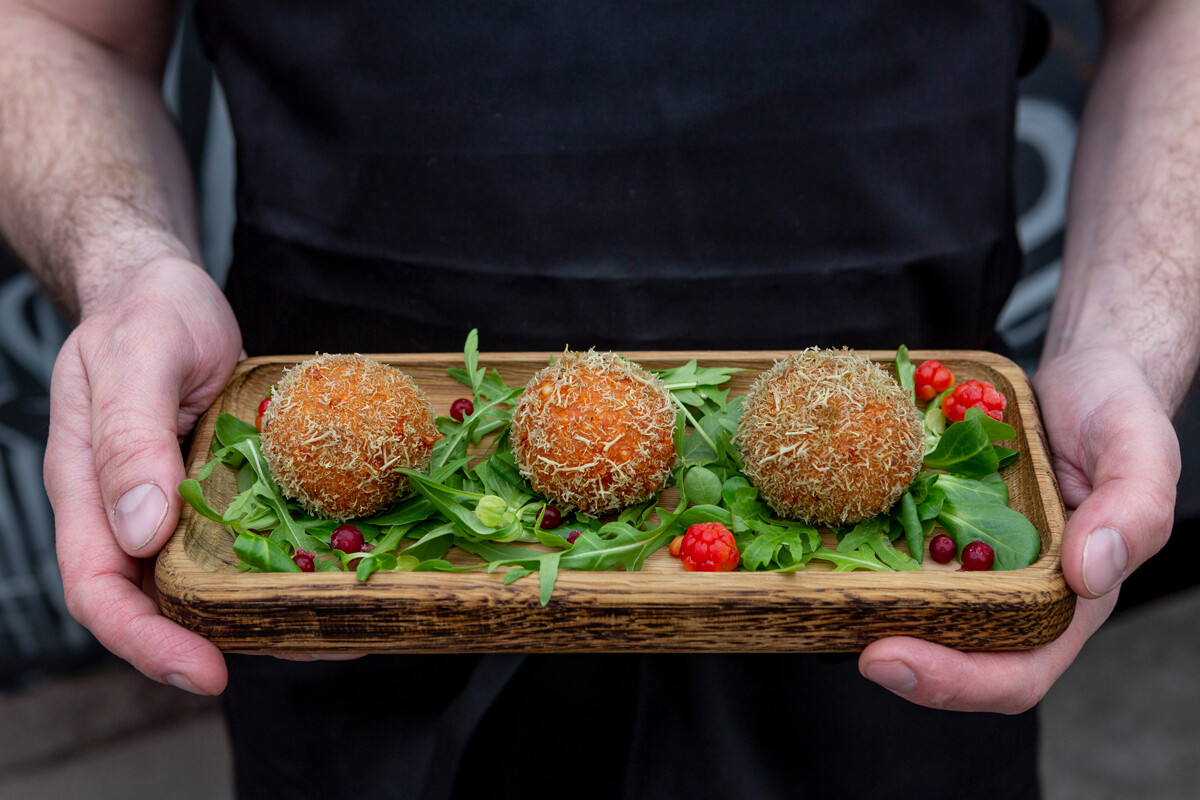 In fact, yagel is a lichen for a reindeer’s lunch. But, it’s also quite popular in northern cuisine for humans. A dish called ‘YagelYozh’ (“Yagel Hedgehogs”) is one of the specialties that can be tried at the ski resort in Polarnye Zori and as a street food in Murmansk Region. ‘YagelYozh’ are croquettes in breaded yagel with a filling of melted cheese with shrimp, scallops or cloudberry. 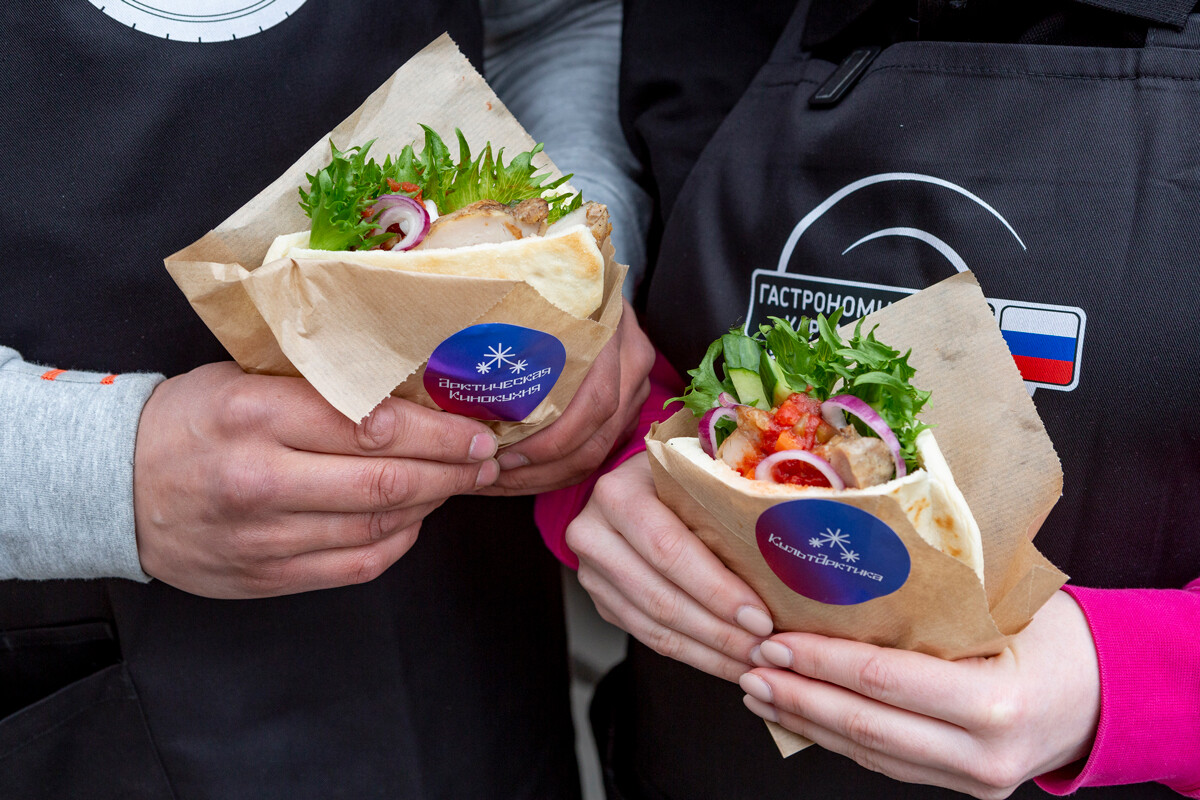 The Barents Sea provides Murmansk dwellers with plenty of northern seafood. It inspired local food maker ‘Friendshef’, who specializes in new Arctic cuisine, to come up with such a sandwich. The ‘Barents pocket’ is a rye flour bun with cod liver, crab fried in butter with garlic and lemon juice, along with potatoes, an egg and a sour cream-mustard dressing. Barents pockets are on their regular menu, as well as in the food trucks at the fairs. 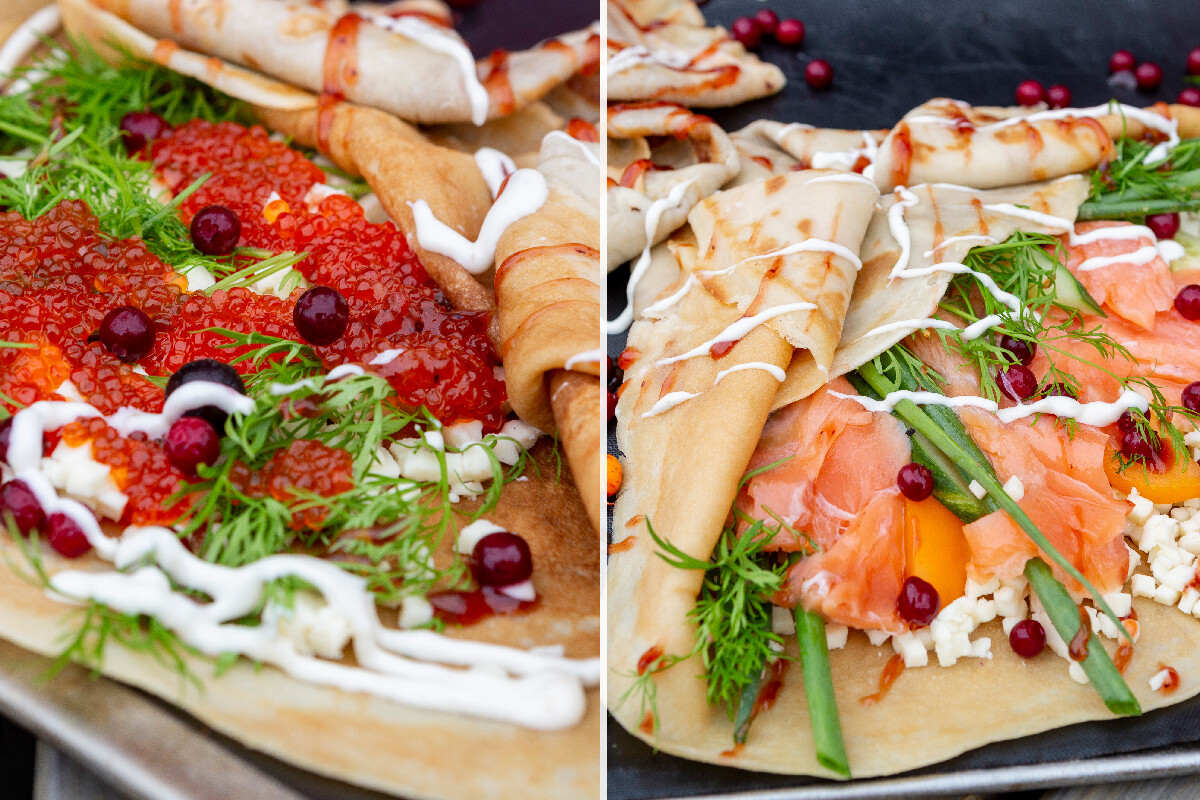 In the town of Zapolyarny, there is a cafe on wheels called ‘Pancake House’ - which is a permanent attendee at any fair in Murmansk Region. They make baked Russian blini with a variety of Arctic fillings. The most popular are ‘Aroma of the North’ with venison, ‘Northern Angle’ with shrimp, ‘Riches of the Arctic’ with caviar and cranberries, ‘Northern Lights’ with blueberries and strawberries. You won’t try these anywhere else for sure! 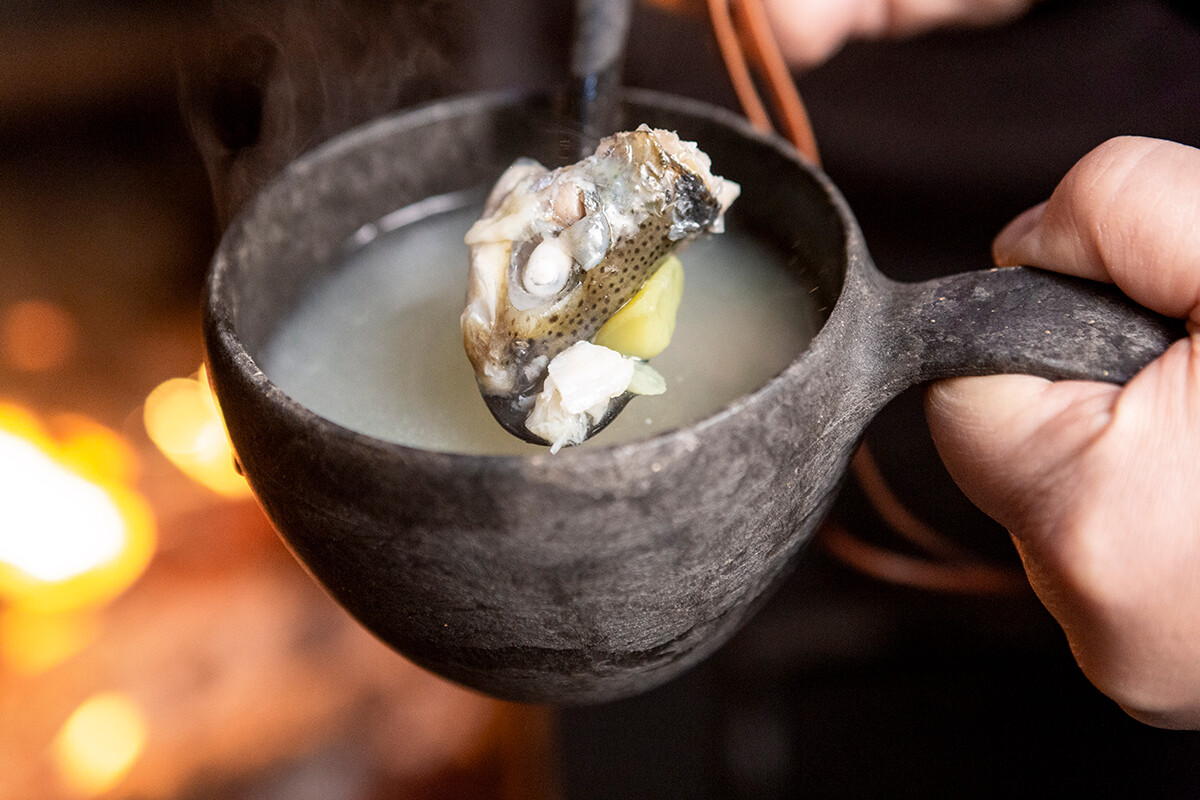 The Saami are the indigenous people of the Russian North, engaged in reindeer herding and fishing. One of the most famous dishes of these people is Saami fish soup. Unlike other ukha soups, the Saami soup is filled with berries - mostly cloudberries and blueberries. It is customary to eat the fish first and then drink the broth.