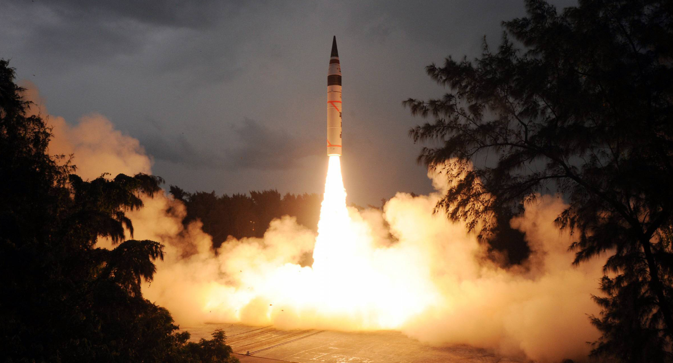 The Agni-5 (pictured above) may not be enough of a deterrent for India's foes. Source: Photoshot

Russian strategic experts believe that India would become a centre of power in a multi-polar world if it possessed hydrogen bombs.

Possession of a hydrogen bomb is essential to India to improve its image as a global power and become one of the centres of power in a multi-polar world, Russian experts said in reaction to a report from US intelligence think tank. IHS Jane’s said that a nuclear centrifuge plant constructed in 1992 near Mysore could be channelled towards making of hydrogen bombs.

At the moment, Russia, USA, China, Britain and France possess hydrogen bombs. The very fact that the second most populated country in the world will be in possession of an H-bomb is nothing strange and surprising, according to Maj. Gen. Vladimir Dvorkin, retired judge of the International Security IMEMO.  “This prediction is likely to be true. In India, levels of development in the nuclear field are high enough,” Dvorkin says. “Especially in the field of peaceful nuclear energy, it collaborates with the U.S., which allows it access to new technologies. And this does not carry any additional security threats. India has long been a nuclear state. It keeps its nuclear capability to deter Pakistan, on one hand, and on the other, somehow counterbalance China. I do not see anything special about it, and nothing unusually new in defiance with respect to Pakistan and China.”

India officially proclaimed itself a nuclear weapons state after a series of tests in Rajasthan in 1998. Operation Shakti was held under the Government of Atal Bihari Vajpayee, when the Bharatiya Janata Party was in power.

According to Tatyana Shaumyan, expert at the Institute of Oriental Studies, Narendra Modi will try to preserve continuity of the party's policies on this issue. “This is necessary for the prestige of India. I do not foresee, at the moment, that threats have become acutely severe which traditionally exist for India's security,” Shaumyan says. “Especially, when the new government that has taken office, is trying to strengthen its relations with its neighbours and with China, where such a step has already been taken. Pakistan Prime Minister Nawaz Sharif was at the inauguration of Narendra Modi. This has happened for the first time in the existence of the two states. Hence the hydrogen bomb for India - is a question of national identity and significance. I do not feel it is that critical a response to threats of India’s security.”

Konstantin Sivkov, first vice-president of the Academy of Geopolitical Problems, noted that in the near future, India will be capable of mastering all three ways of delivering nuclear warheads. That is via aircrafts, ballistic missiles and nuclear submarines.  “The world is heading towards an enhancement of military tensions and conflicts. Leveraging its nuclear potential, India wants to ensure its own security,” Sivkov says. “It is quite a legitimate aspiration of any country and an objective necessity of India. China is in possession of a thermonuclear bomb. The appearance of the hydrogen bomb in India could cause an explosion of indignation in the Chinese diplomacy and cause it to further develop its nuclear weapons. But China is on the way of almost openly being in conflict with the United States. It will continue building up its forces, including nuclear, not to compete with India, but with the United States.”

So far, China has not responded to findings of the report by IHS Jane’s. Pakistan has commented on it very guardedly. A representative of the ruling Pakistani Muslim League, said: “We do not want an arms race. This does not go in favour of both the countries.” In India itself, the report's findings are not being commented at all.