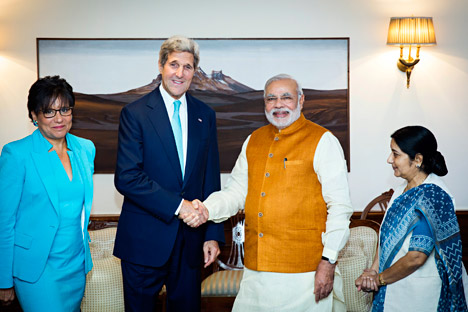 India is striving to step up cooperation with the U.S., including in the defence industry. However, experts interviewed by RIA Novosti consider Russia to be a more reliable partner.

U.S. Secretary of State John Kerry was on an official visit to India last week, where he met the Minister of Finance (and Minister of Defence) Arun Jaitley and expressed optimism about top-level contacts between Washington and the new Indian Prime Minister Narendra Modi.

American leaders such as Vice President Joe Biden and Senator John McCain have already met with the new Indian leadership. In August, Defence Secretary Chuck Hagel will visit India and in late September the Indian PM is scheduled to visit Washington where bilateral talks are planned with the U.S. President Barack Obama.

However, relations between the U.S. and India have been darkened by a whole series of unpleasant incidents recently. In December 2013, an Indian diplomat was arrested in New York and charged with the inappropriate treatment of a servant, which unleashed a flurry of indignation in Delhi. Moreover, India has repeatedly appealed to the U.S. for an explanation about reports published in the mass media concerning American intelligence services spying on Indian political figures.  On top of that, Modi himself was barred from entering USA up until the point he assumed the post of Prime Minister.

Experts say that the U.S. and India have recently been inclined to examine each other closely rather than take any active steps.

“Relations between India and the U.S. are at a pause,” thinks Petr Topychkanov, an associate in the Carnegie Moscow Centre’s Non-proliferation Program. According to him, India is prepared to develop relations with the U.S. and the Americans also want to extend support to Narendra Modi.

Topychkanov is sure that, “at the same time, no steps are observed on the part of the U.S. which indicate it is prepared to offer something substantial and attractive for India.” The vice-president of the influential think tank the Observer Research Foundation, Nandan Unnikrishnan, also notes that, “U.S.-Indian relations are now more active after a period of stagnation.”

Along with this, the sanctions that the U.S. imposed against India and Pakistan after the nuclear weapons tests they carried out in 1998 are well remembered in New Delhi. This is why Indians see the United States as a partner “with which relations will always have their limits,” thinks Topychkanov.

Unnikrishnan is certain that India has placed an ambitious task before itself – not only to occupy a prominent place in the new security architecture in Asia, but also to become one of the main players on par with China, the U.S. and Russia in the new multi-polar world.

India’s new government has set its course towards the strengthening of the country’s defence capabilities. India intends to modernize its arms and ammunition and to completely equip its army with weapons and military technology of domestic production over the next several years. In addition, it wants to increase its arms export significantly during that time. It is with this specific goal in mind that the Indian Government has already opened its defence sector for foreign investment; the foreign share in the Indian defence firms can now be as high as 49 percent.

“India must pursue the path of building its potential up and manufacturing weapons at home. To do this, it will need to receive technology and skills from countries willing to cooperate,” thinks Unnikrishnan.

“Russia will lose shares in the market for weapons and military equipment not because of the machinations of the USA, Israel, France, or other countries, but because India will need to diversify its sources for arms and military hardware,” Topychkanov says. “In addition, a growing proportion of the weapons and military equipment which are produced in India itself – including by non-state enterprises – will become stronger, more effective, and more technologically advanced. Hoping that we will retain 60-70 percent of the arms market in India would be stupid.”

However, Russia does not need to fear losing India as a strategic partner, Topychkanov believes. “Russia cooperates with India in those areas where no other state is willing to cooperate,” he notes. Examples of such joint projects are the modernization by Russia of the Vikramaditya aircraft carrier at the commission of India, the building of the Arihant nuclear submarine with Russian help, and cooperation in missile manufacturing. In Topychkanov’s opinion, these are the areas Russian-Indian cooperation will expand.  Unnikrishnan is also positive that “it is not in the national interests of India to bring harm to Indian-Russian relations in any way.”

In the opinion of experts, Russia is seen in the eyes of India as a more reliable partner than Western countries, including the U.S.

“We are an old, proven partner for India. The people involved in negotiations on both sides know each other very well. They know our weak and strong points. They know how to handle business with us,” Topychkanov says.

“Russia stood with us in the difficult moments of the young Indian republic. I do not think this will be forgotten in India,” Unnikrishnan adds.

Moreover, India has already got an idea about what kind of partners Western countries are. Topychkanov brings forward the examples of how negotiations with France on submarines are dragging on as well as how the dates have been changed and prospects for the supply of the French Rafale fighter jet (which had won the tender in India) are becoming increasingly vague.

Complications with America may arise

“The U.S. can always put a stop to the fulfilment of contracts or the servicing of weaponry and military equipment sold to India purely for political reasons. Russia has never done such things,” thinks Topychkanov.  He believed that this is understood perfectly in India so the nation does not want to become dependent on the United States.

Experts predict the strengthening of relations between America and India in the future, but there is no point waiting for a breakthrough. “Relations between India and the U.S. will develop, but rather slowly and at a cautious tempo. The main task before Obama and Modi is to normalize relations after all of the crises,” Topychkanov asserts.

However, Russian President Vladimir Putin’s planned trip to India in December is certain bring more results in terms of negotiations and concluding new contracts than Modi’s visit to the USA.