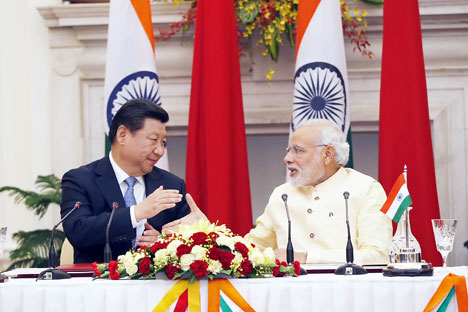 The Goa summit cannot be tackled in isolation from the tensions between India and Pakistan that is supported by China, Russian experts say.

A BRICS (an association of Brazil, Russia, India, China and South Africa) summit, which is due to be held in India’s Goa on October 15-16, may be tangled by contradictions between India and China on the Pakistan-India strains, according to Russian experts who had a roundtable meeting on Monday.

The foreign policy background for the summit is not smooth due to contradictions between India and Pakistan, with the latter enjoying support from China, Georgy Toloraya, the executive director of the National BRICS Study Committee and head of the Center for Russian Strategy in Asia at the Russian Academy of Sciences’ Institute of Economy, noted.

"The summit cannot be tackled in isolation from the tensions between India and Pakistan that is supported by China. The background for the Goa summit is uneasy. But it does not mean that it is impossible to reach agreements. It doesn’t mean that there are no common interests to be promoted," he said.

Vycheslav Kholdkov, head of the international economic organizations sector at the Center for Economic Studies of the Russian Institute for Strategic Studies, shared the opinion that the Goa summit is not promising to be a smooth and easy one. "BRICS is facing both internal and external challenges," he said.

According to Kholdkov, a key task of the summit is to preserve BRICS’ unity on the backdrop of the acute economic and political crisis in Brazil. "The group has the task to preserve its unity and prevent its disintegration," the expert said. "It is necessary to demonstrate Brazil’s new political leadership that membership in this group is beneficial for the country."

Georgy Toloraya noted in this context that the mere existence of BRICS is an irritant for a number of Western countries. "Despite the unprecedented pressure on BRICS from the United States and the West, their attempts to undermine its unity have failed," he said, commenting on the recent developments in Brazil which triggered a political crisis and impeachment of President Rousseff.

"What has happened in Brazil this year has incurred certain damage to BRICS," he said.

Trans-Pacific Partnership is a threat to BRICS

At the same time, he noted that such an answer has already been given when Russia and China signed in May 2016 an agreement on linking the Eurasian Economic Union and the Silk Road Economic Belt project. "If these plans win support from the ASEAN, it will be a great success," Kholodkov said.

Toloraya shared his vision of what can be included in the summit’s final declaration.

"The declaration, which has not yet been agreed, will include BRICS’ traditional issues," he said. "They are political issues concerning the polycentric world order, with a special focus on the situation in the Middle East and the problems that have surfaced in Syria. BRICS cannot avoid this subject."

"The Indian-Pakistani situation will also be reflected in the document," he said, adding that the would-be declaration will include various aspects of ways of overcoming the financial and economic crisis, improving the global financial architecture, and trade regimes.

"I am optimistic about the summit," the Russian expert underscored.

It was founded at the Petersburg Economic Forum in 2006 as BRIC to be joined by South Africa in 2009. The next summit of the organization will be held in mid-October in India’s Goa.