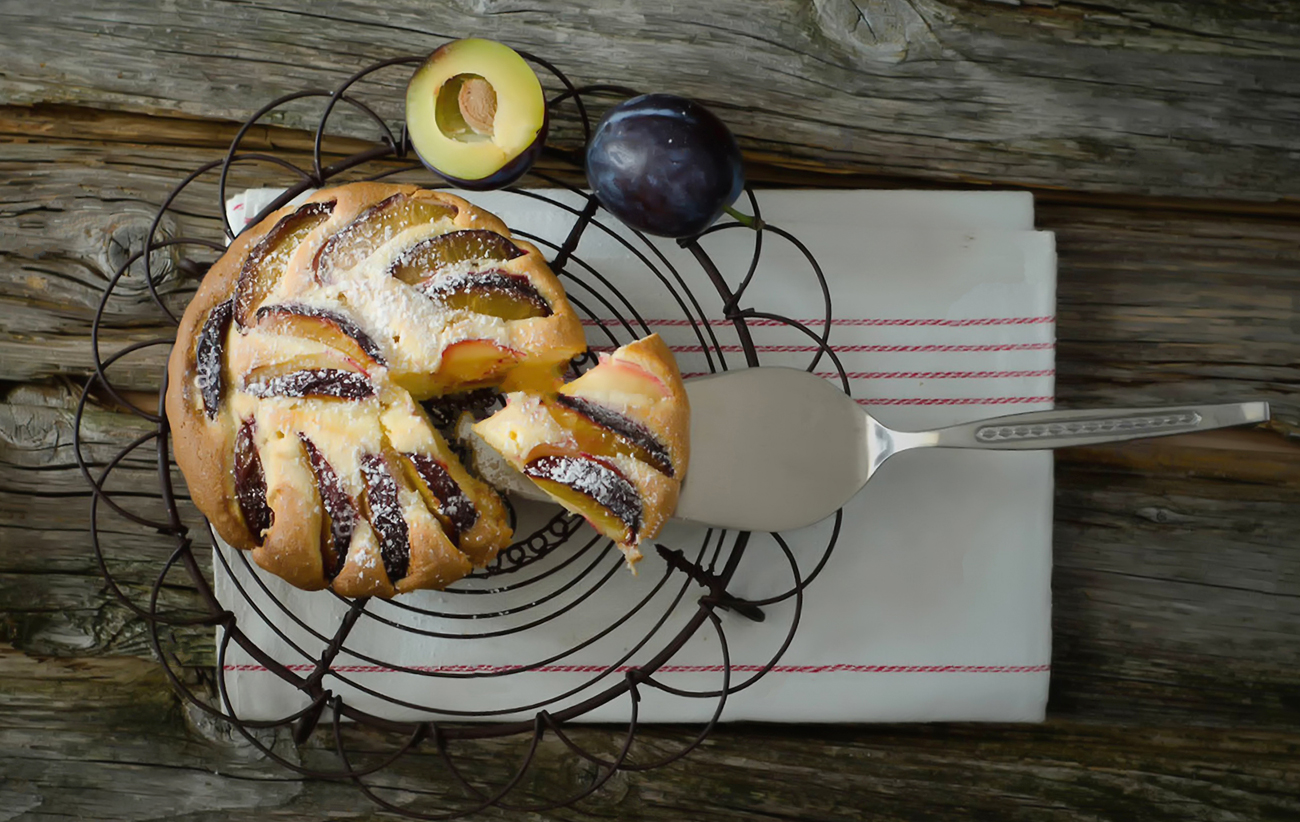 Vostock-Photo
Many countries have their own version of plum pie. Russia’s features a sweet dough with a slightly bitter filling, perfect for an autumn night.

“The colored fall is the year’s evening,” wrote renowned Russian poet Samuil Marshak. And a cool fall evening is the perfect time to wrap yourself in a blanket, put on a favorite movie and enjoy a tasty home-baked treat in the company of your friends. 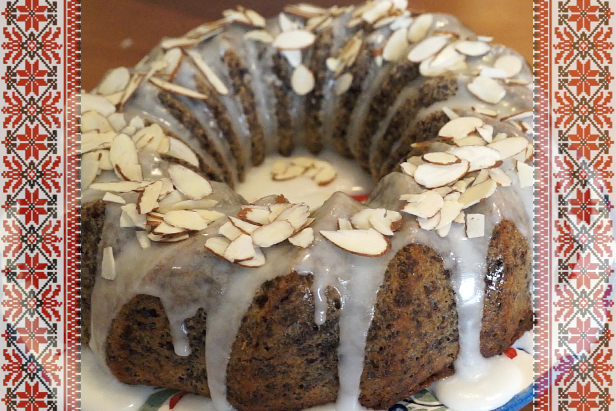 September in Russia is the time for plums. Raspberries and gooseberries are gone, pears are harvested, and then the rich plums come in. The most popular types in Russian gardens are, unsurprisingly, hardy and accustomed to cool weather. Some of the best known are “egg blue” (which resembles a big egg), “blue-eye” (small and oval-shaped) and the yellowish-red “Timiryazev memory,” named after botanist Kliment Timiryazev.

Plum pie around the world

Almost every country has its own type of plum pie. They only differ slightly in the types of dough and fillings, which can include cheese cream, nuts, candied fruits and honey.

The New York Times published its recipe for plum torte in the paper for 12 years, from 1983 to 1996. The last year, the editor printed the recipe in big type with a dotted border to encourage people to cut it out, but this didn’t stop home cooks from writing in and requesting it. Today the paper features it on its website every fall. 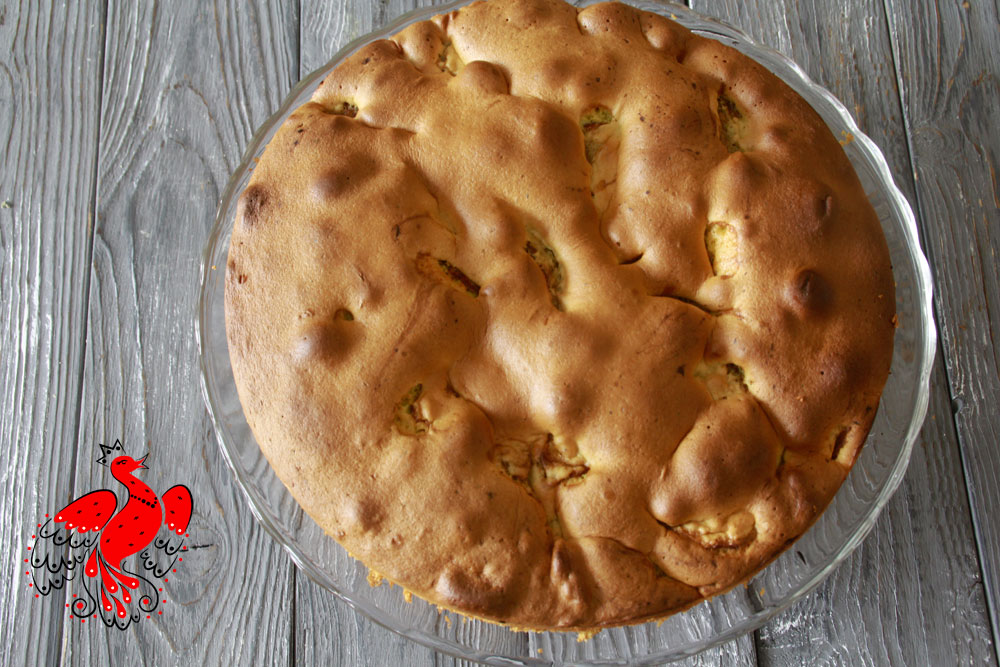 France is known for putting plums in its delicious turnover pies and clafoutis: desserts made from fruit baked in a sweet egg dough similar to batter. Plums are placed into the baking dish, then covered with dough.

German Pflaumenkuchen, the traditional dish of the city of Augsburg, is known by practically every German as “granny's pie,” no matter where he or she is originally from. It is baked on a big sheet pan to make enough to feed the whole family, and is based in a fermented dough or shortcrust. A thin layer of dough is covered with the halves of the plum fruits (the pits are removed), sometimes topped with streusel.

The recipe we are offering here is really simple. It is based on the sweet dough for sharlotka, the extremely popular Russian apple pie. The filling adds a slight sour taste. Use plums that are dark and soft, but still strong. 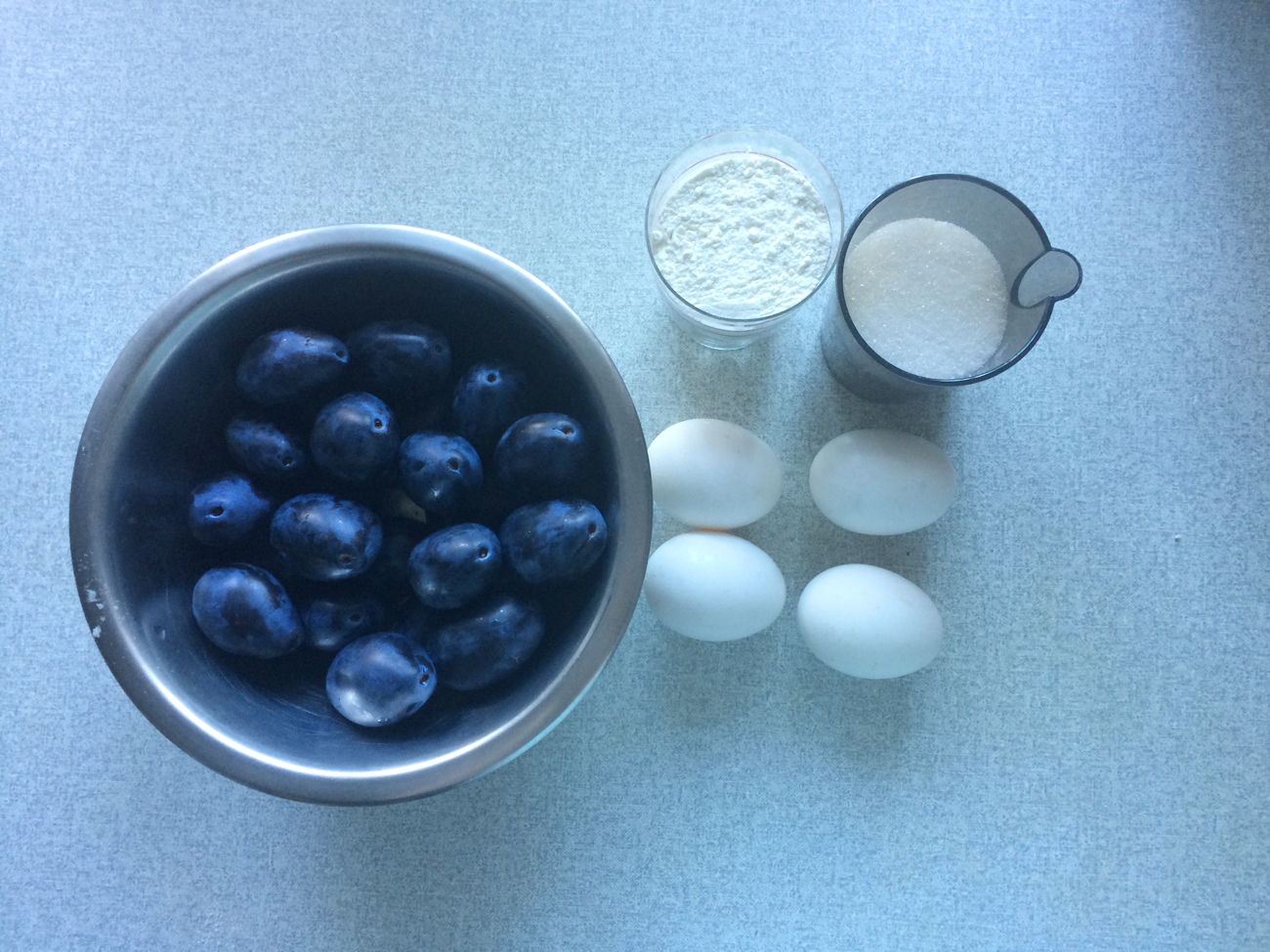 1. Wash the plums, remove the pits, cut into pieces. 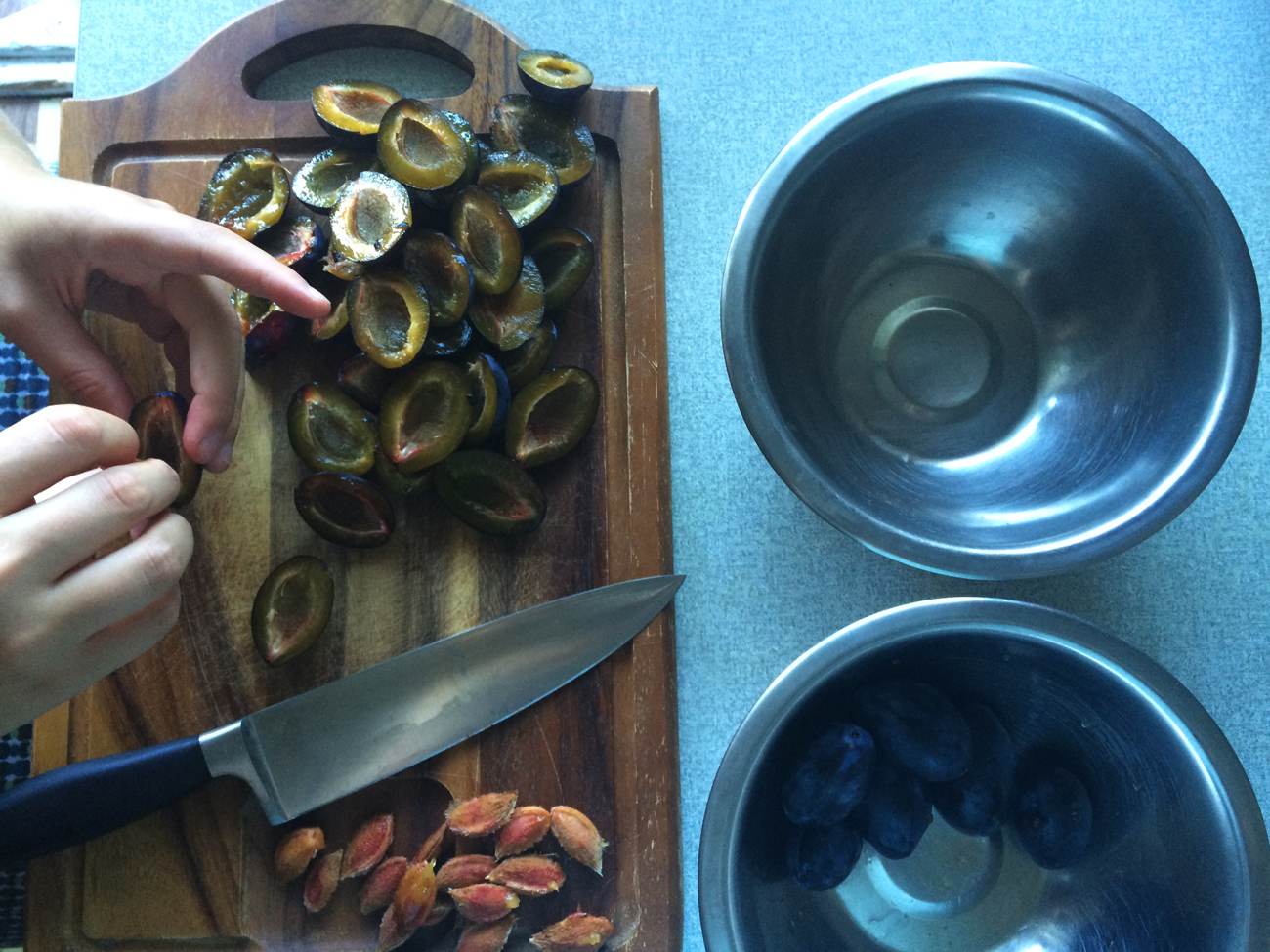 3. Crack the eggs into a bowl, add a spoonful of sugar and a pinch of salt. Beat with a mixer for about 5 minutes until stiff. Add the remaining sugar little by little, by a spoon or two — otherwise the dough will go flat.

4. Add the sifted flour a little at a time, stir slowly until smooth.

5. Grease the baking dish with a small amount of butter and sprinkle with flour. Some recipes suggest spreading almond paste on the bottom of the dish as this  will absorb the liquid from the plums. 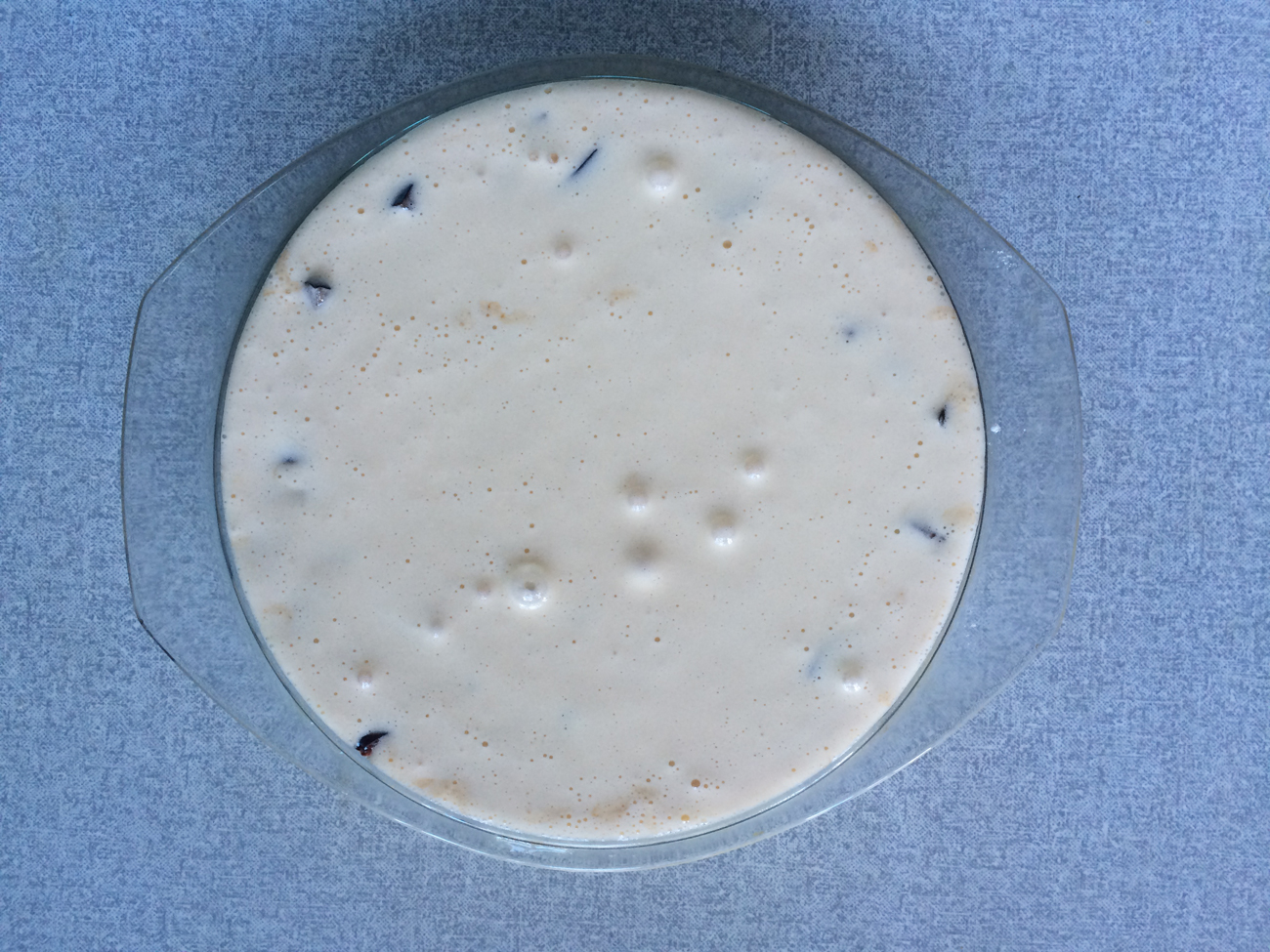 6. Add some dough into the baking dish, put in the plums, then cover with the remaining dough.

7. Place the dish into the preheated oven on the middle shelf. Bake the pie for 40 minutes. Do not open the oven during the baking process. Cool in the baking dish. 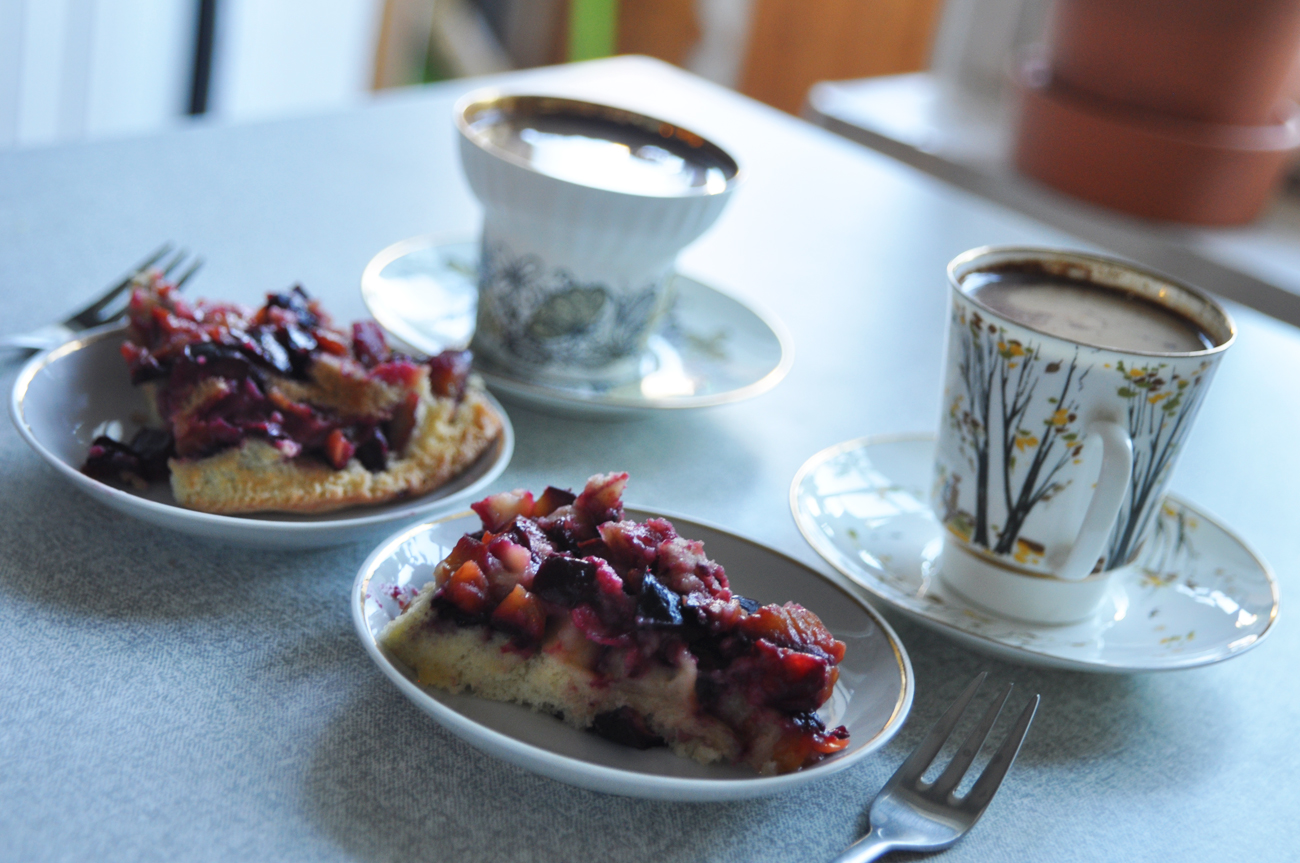 Plum pie can be served cold or warm. To keep it fresh and prevent it from becoming stale, cover it with napkin made of fabric — but it’s unlikely to stay around for very long! 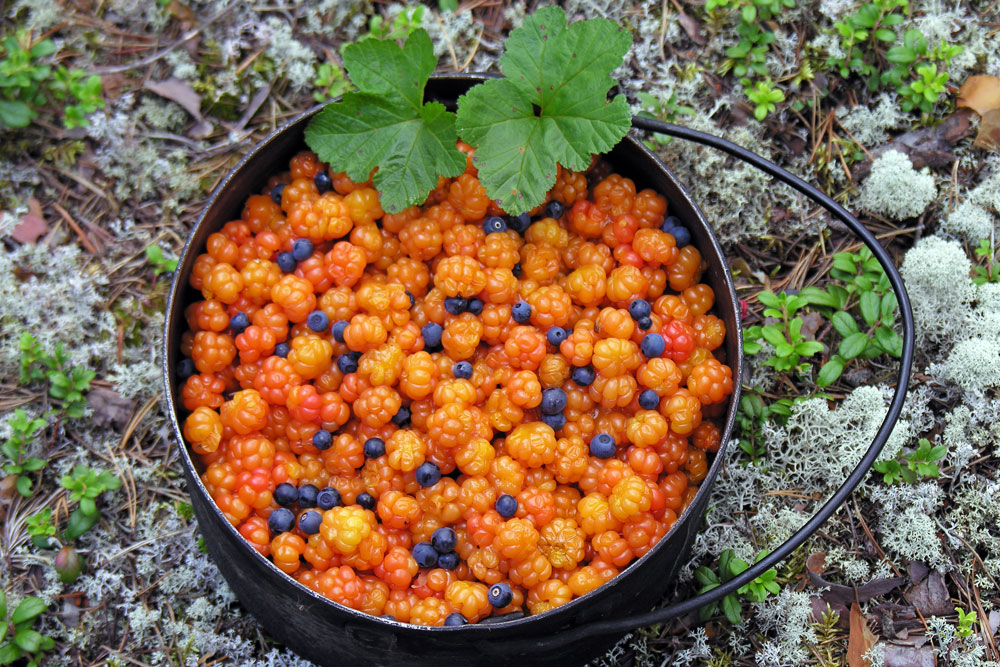