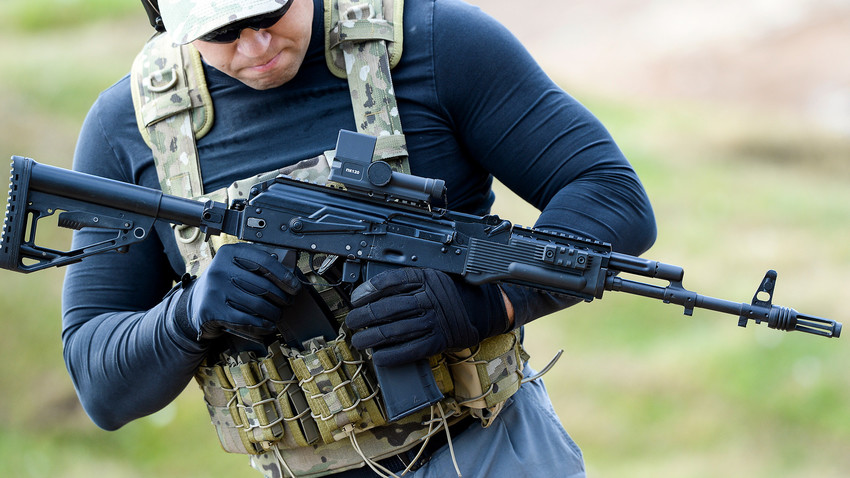 Alexander Vilf/RIA Novosti
These guns changed tides of wars all over the world and brought fame to Russian firearms manufacturers.

Throughout the years it has proven to be one of the most durable and accurate weapons, with Russian soldiers fighting their way with this rifle through a number of conflicts that shook the foundation of the country - World War I (1914-1918), Civil War (1917-1922) and the Great Patriotic War (1941-1945).

It also was one of the most mass-produced military rifles in history, with 37 million Mosins made since 1891.

Despite its age, it’s still used in different forms in modern conflicts.

“You can even find its sniper version on battlefields in Syria. The Mosin costs about $200 on rifle markets, and is one of the cheapest guns that uses powerful ammo and can work in extreme weather conditions,” said Dmitry Safonov, an Izvestia newspaper military analyst.

This absolute classic of Russian firearms became the foundation for all weapon developments in the country. It was the first semi and fully automatic 7.62x39 mm assault rifle in the country, and immortalized its creator Mikhail Kalashnikov, a man who dropped out of school after seventh grade and is today known as one of the greatest weapon makers in history.

Throughout the Great Patriotic War, Russian weapon manufacturers spent days and nights trying to create new weapons to change the tide of the war, which the county had been loosing up until 1943.

Even today historians argue on how the war would have gone if Kalashnikov invented his rifle a couple of years earlier - the design work on the gun began in the last year of the war, and a year later it went into testing, eventually becoming the main firearms for Soviet and Warsaw Pact soldiers for decades.

“Many historians and gun-guys forget that the AK-47 we know today passed through numerous modifications and improvements, only getting its final and classic appearance in the early 1960s. It’s a common mistake to claim that this rifle could have changed the course of World War II, because it took 15 years of modifications to make the gun perfect,” said Safonov.

Today, 70 years after its birth, the AK-47 remains one of the most widely used weapons in wars around the globe due to its reliability, cheap price and powerful 7.62x39 mm ammo.

According to Oxford University research, there are an estimated 100 million Kalashnikov rifles around the world today, and 75 percent are AK-47s.

To create a new rifle that will change the gun world, first you need to create a new bullet. That’s what gave birth to the AK-74 to replace the AK-47 in the Soviet army. The new gun was charged with new 5.45x39 mm ammo that replaced the previous 7.62 mm caliber.

“There were many reasons to change the ammo. With 5.45 mm the AK-74 is more accurate, the bullet flies further and the gun has less recoil. The assault rifle also lost two kilos thanks to those changes. Yes, 7.62 is a more powerful round, but all other factors became more important for soldiers and designers, and this took military manufacturing one step forward,” the expert said.

While the AK-74 is still used by the Russian army, it will soon be replaced by the AK-12 as the main rifle for the country’s soldiers.

The first glimpse at the latest version of the AK-12 assault rifle, never seen before in public, can be found only here on RBTH.