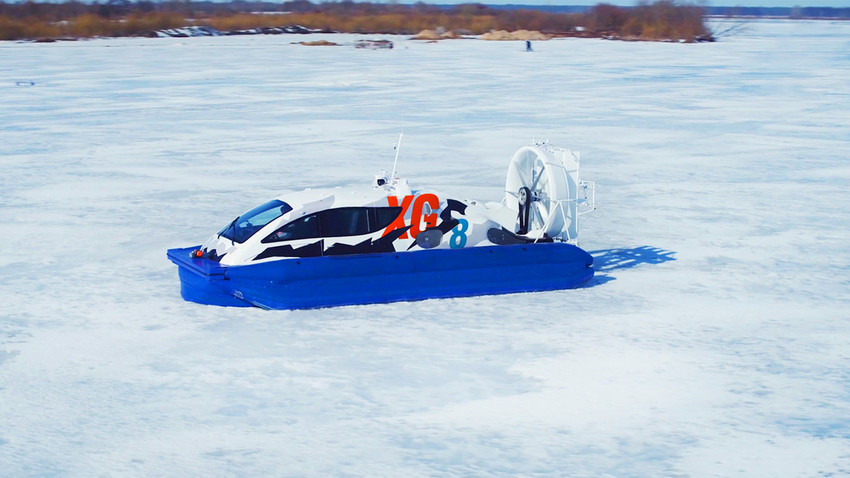 This ship covers up to 750 kilometers thought ice, sea, snows and sands on just one tank.

Innovative intersectoral engineering center
Russian manufacturers created a floating speed vessel XG-8 to save people around the country from drowning or even from bigger threats.

“First 15 machines were already delivered for the country’s emergency services. They were manufactured to work in snowy eastern regions of Russia where snows and floods are inseparable parts of people’s lives,” - told Russia Beyond Vladimir Kuzmichev, CEO at Innovative Inter-industrial Engineering Centre, that created this vessel.

This ship, car or even a "low flying jet" covers up to 750 kilometers thought ice, sea, snows and sands on just one tank. Its speed limit goes up to 100 km per hour and, as the company’s manager believes, can even serve well for the Russian navy forces.

“It might be used to debark troops on all types of seashores. You can place from 10 to 30 men inside of different types of this vessel and conduct operations in all types of weather,” - he said.

Another interesting thing about the vessel is its maneuverability. Due to its 413 horse power rotor and an air bag, an operator can easily drift on ice and snow demonstrating spectacular tricks for audience.

“A couple of private entrepreneurs bought this vessel for their resorts to entertain people thought-out the season,” - Kuzmichev added.

Potential new guns for the military?

“If you want to present this type of vessels to the country’s Navy forces, than you should expect to integrate at least additional armor and posts for heavy machine guns. Not sure that it withstand their recoil or survive in real combat situation, but will definitely be a suitable addition to the new season of “Walking Dead”, - a professor of Academy of Military Science Vadim Kozulin told Russia Beyond.

Yet he believes that this type of vessel might be a potential addition to the border patrol forces.

“It can ride thought pretty solid number of obstacles. So it would be suitable for swift forces,” - he added.