Ancient sea cow skeleton found in Russia: Why did it go extinct? 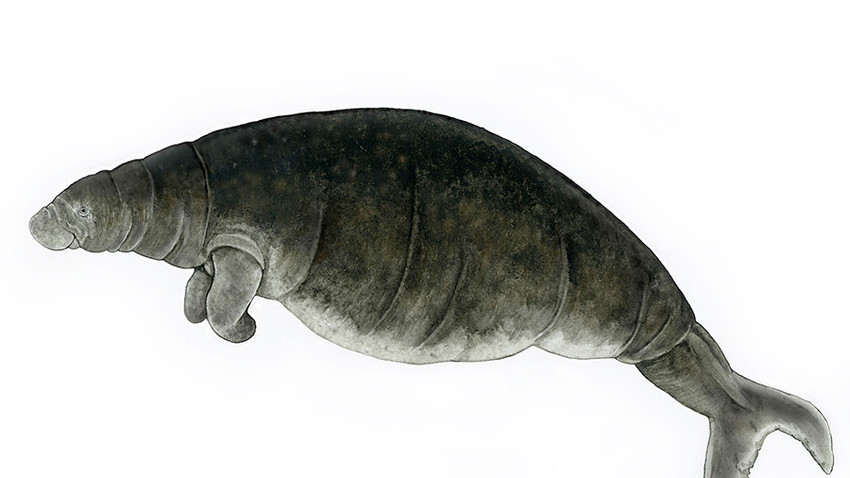 The last Steller's sea cow seen in the wild was spotted by fur hunters in 1768.

Marcus Webb/FLPA/Global Look Press
About 250 years ago a massive aquatic mammal, which had the face of a walrus and the tail of a dolphin, was hunted to extinction. Last week, a nearly complete skeleton of the ancient creature, known as Steller’s sea cow, was found on a remote Russian island off the coast of Kamchatka in the Far East.

Marina Shitova, a research assistant at the Komandorsky Nature Reserve, discovered the skeleton of the extinct Steller's sea cow, which was buried at a depth of 70 centimeters (27 inches) under a layer of pebbles and sand. The skeleton’s total length was 5.2 meters (17 feet), but since some parts were missing scientists assumed the mammal’s total length could be as much as six meters. 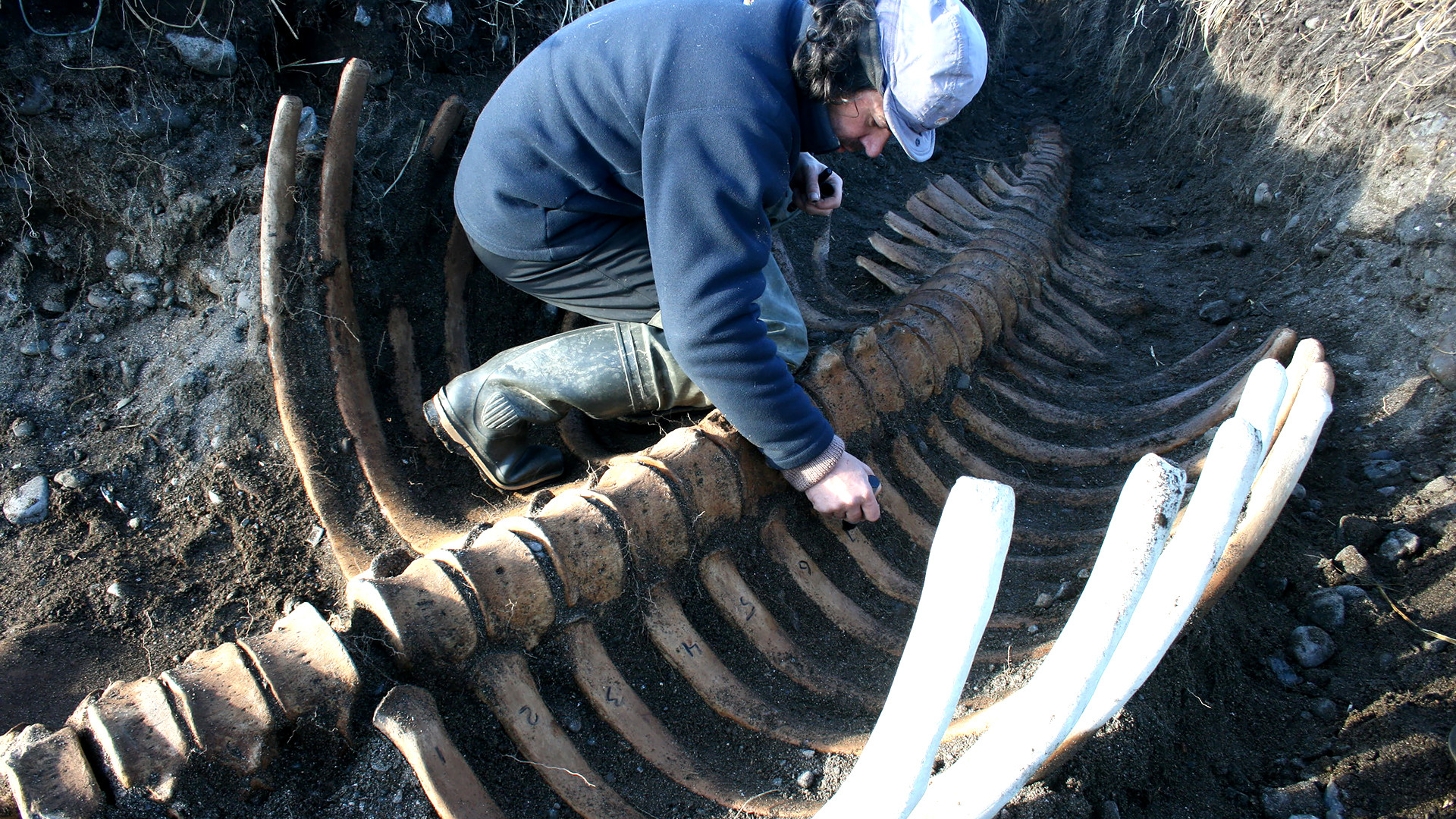 Nearly 40 years have passed since the last time a Steller’s sea cow skeleton was discovered on Bering Island, which is the largest among the Commander Islands off the coast of Kamchatka.

The mammal’s name derives from the naturalist who in 1741 officially reported its existence - German scientist Georg Steller. By 1768, however, the animal was completely wiped out, hunted to extinction.

Steller was part of an expedition organized led by Danish explorer Vitus Bering and financed by the Russia state. One day, when walking along the beach searching for firewood, Steller saw a huge, black shape moving slowly like an overturned boat. Every few minutes a snout appeared for a moment to breath with a horse-like sound.

Steller described the sea cows as gentle giants, whose only real defense against harpoons was their incredibly thick hides. This large mammal, whose body length was up to 10 meters and with a mass reaching five tons, was unusually loyal to others of its kind, reported Steller. 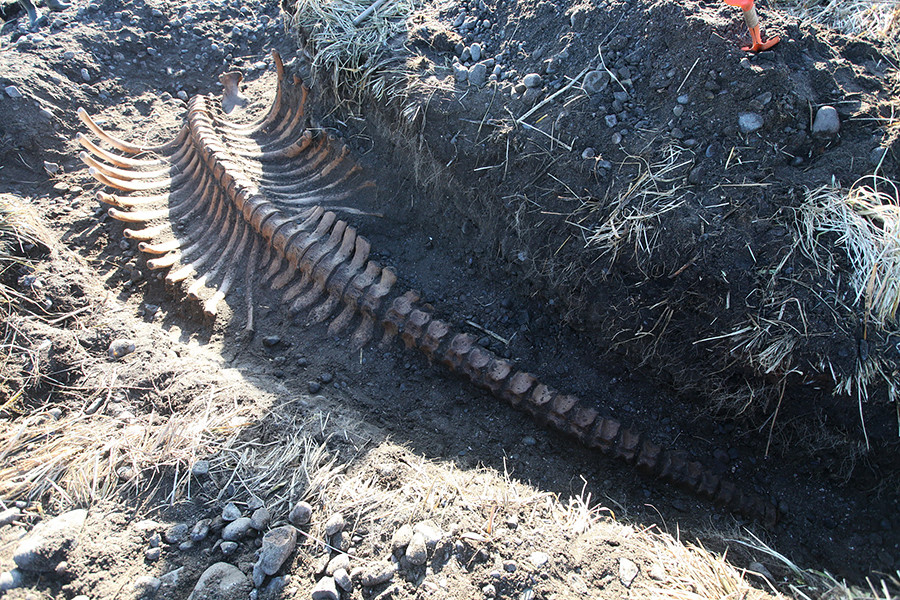 They had "an uncommon love for one another, which even extended so far that, when one of them was hooked, all the others were intent upon saving him." When the hunters harpooned one of the sea cows, others came to its defense, making a circle around their wounded comrade.

When they killed a female, people were astonished to see its mate visit the beach where its body lay day after day, "as if he would inform himself about her condition." In his reports, Steller compares the sea cow’s thick blubber to the best Dutch butter, and wrote that it tasted of "almond oil when boiled down." These qualities later brought the cow to extinction a few decades later, and the last one seen in the wild was spotted by fur hunters in 1768.

The Komandorsky Nature Reserve, where the skeleton was found, is Russia’s largest marine natural reserve. Located on the Commander Islands, it’s a refuge for rare sea mammals, the unique blue fox, and exotic bird species. 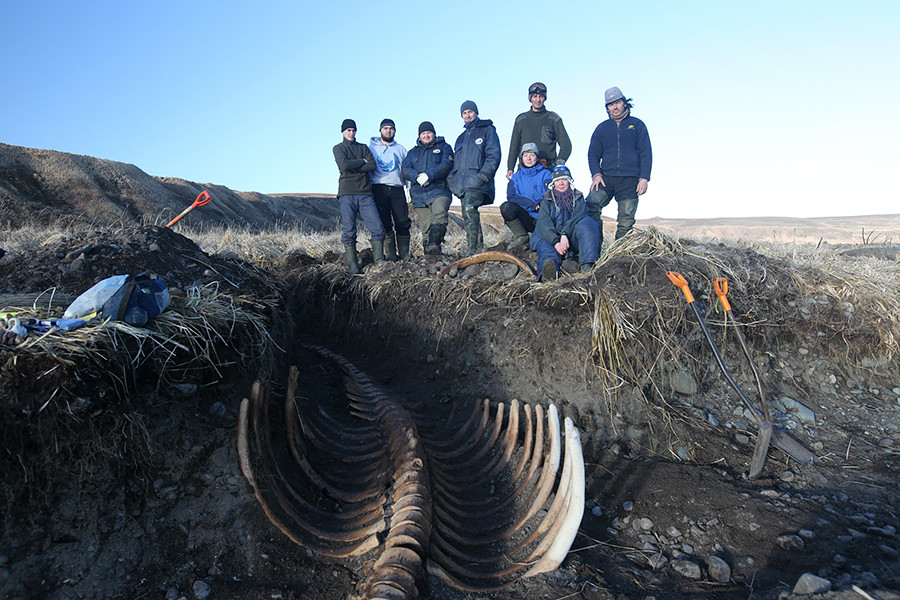 Researchers of the Komandorsky Nature Reserve

Steller’s sea cow was one of the last survivors of the Pleistocene era - the geological era immediately preceding our own that was an age of giants, when saber-toothed tigers lived in North America, and Eurasia was populated by mammoths.

Most of these giants went extinct 10,000 years ago, at the end of the last Ice Age. The ancient sea cows, however, found refuge far from humans in the Commander Islands until discovered by Steller.