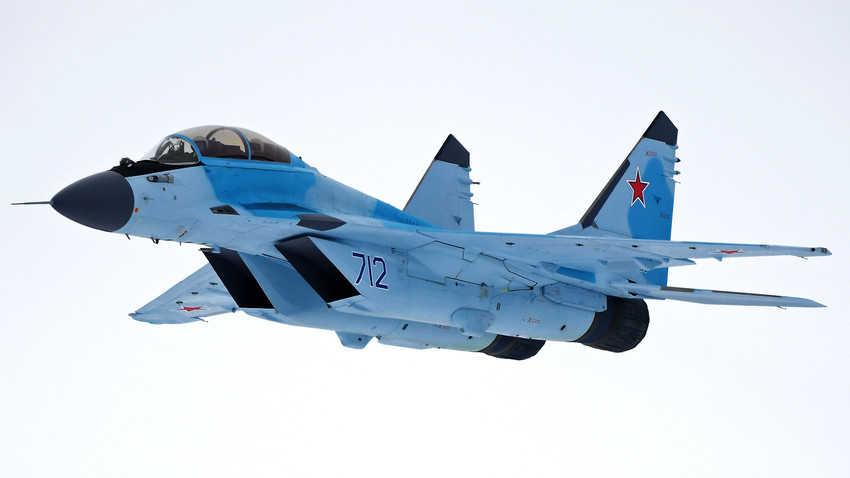 Russia’s MiG-35 fighter jet will soon be equipped with a new type of missile that will be able to eliminate enemy targets out of the reach of air-defense systems, keeping jets and bombers safe in battle.

Ramil Sitdikov/RIA Novosti
The country’s newest 4++ fighter will soon be able to take out targets while staying out of reach of enemy defense systems.

Russia’s MiG-35 fighter jet will soon be equipped with a new type of missile that will be able to eliminate enemy targets out of the reach of air-defense systems, keeping jets and bombers safe in battle.

According to of the MiG Corporation, Anastasia Kravchenko, the missile has already passed a number of tests.

The MiG-35 has also been fitted with systems allowing it to attack targets illuminated by an onboard laser, which employs new generation electro-optical systems and an external ground-based - or aerial - designator.

What’s special about these missiles?

“Russia is currently developing new long-range air-to-air and air-to-surface cruise missiles for frontline fighters that will operate at the radar range of our aircraft,” a Russian defense industry source told Russia Beyond.

The source stressed that the missiles will have a strike radius of 200 km. The operating range of the most advanced U.S. missile defense system (Patriot) is 180 km.

The first models intended for aircraft have already been greenlighted and put into production.They are called the X-35AT and X-31.

“They will be fitted on MiG-35K navy fighter jets for the Admiral Kuznetsov or Storm (set to be the world's largest) aircraft carrier. These missiles can hit targets above the water surface and in coastal zones,” the source explained to Russia Beyond.

Russia is also said to be developing a land version of the missile for frontline aircraft of the Russian Aerospace Forces. “No specific models have been demonstrated for fighters, but since the X-101 missile - with a kill range of 4,000 km - has been delivered for strategic bombers, the design team could potentially create a version for tactical aviation,” the source added.

The MiG-29 became the basis for further technological developments, morphing into a 4++ fighter jet: The MiG-35. This machine was designed to operate in heavily contested environments while using laser-guided weapons systems.

One of its main features is its payload capacity of 6.5 tons of different guided missiles. The MiG-35 also has the ability to track 10 to 30 targets at the same time.

What are its main foreign rivals?

The new Russian fighter jet will cost around $17 million and can be compared with some American fighters.

“The aircraft's design concept partially resembles that of the U.S. [McDonnell Douglas] F/A-18, a mainstay of the U.S. Naval Air Forces,” Pavel Bulat, from the University of Information Technologies, Mechanics, and told Russia Beyond.

According to him,  the two fighters have phenomenal aerodynamics and maneuverability. Yet the MiG-35's engines are a little underpowered compared to those of France's Rafale and the multinational Eurofighter Typhoon.

The expert says the MiG-35 can compete with American fifth-generation fighters.

“If pitted against the [U.S. Lockheed Martin] F-35 Lightning II, that behemoth with the maneuverability of a ground-attack aircraft, the MiG-35 will invariably come out on top. However, taking out one of the [Lockheed Martin] F-22 Raptors would require three MiG-35s,” Bulat concluded.