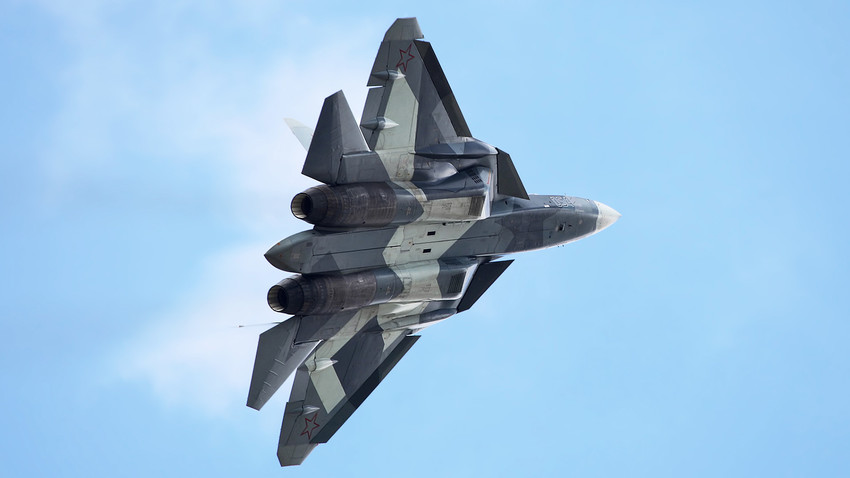 Vitaly V. Kuzmin/www.vitalykuzmin.net
The world’s most advanced 5th generation fighter has a new ‘heart’ to help it maintain mind-blowing speeds - new weapons are also being tested for the aircraft.

The Su-57 is Russia’s newest 5th generation fighter jet - it rivals America’s F-22 Raptor and F-35 Lightning II. The first model of the aircraft has pierced the sky in front of people from all over the world and military delegations at Moscow’s MAKS Air Show.

Defense experts do not hide the fact that the jet requires more work. In December, the SU-57 was fitted out with an advanced new engine.

What does the new ‘heart’ do?

After testing is completed the new engine will enable the Su-57 to accelerate in to supersonic speed, and maintain this velocity for its entire flight.

“I think the speed will be 1.6 Mach, about 2,000 km/h, depending on where it will be flying. The engine will also improve the Su-57’s stealth capacity thanks to new composite materials,” said Pavel Bulat, avionics expert director of Kupol.

According to the expert, the upgrade will be fully integrated by 2020. The Sukhoi Corporation, which builds the jets, is also planning to improve its radar system. Bulat believes the aircraft is the most advanced 5th generation jet in the world.

Which weapons will the Su-57 have?

As well as air-to-air and air-to-surface missiles, and a 30-mm gun, the plane will be equipped with a series of bombs hidden inside the body (as opposed to hanging from the wing) to reduce the jet from enemy radars.

How many Su-57s will the Air Force receive?

The first batch of planes is already included in the 2018-2025 Army Rearmament Program. However, the Defense Ministry is in no rush to finance more Su-57s.

“Firstly, the price of one Su-57 without armament can reach $100 million. Without this is a very effective yet costly machine,” said Dmitry Safonov, from the Izvestia newspaper.

He noted that this was one of the reasons why the Defense Ministry has decided to buy 12 jets, instead of the originally planned 48.

“For now the 4th generation Su-35C will carry out the functions of the fighter,” added Safonov.