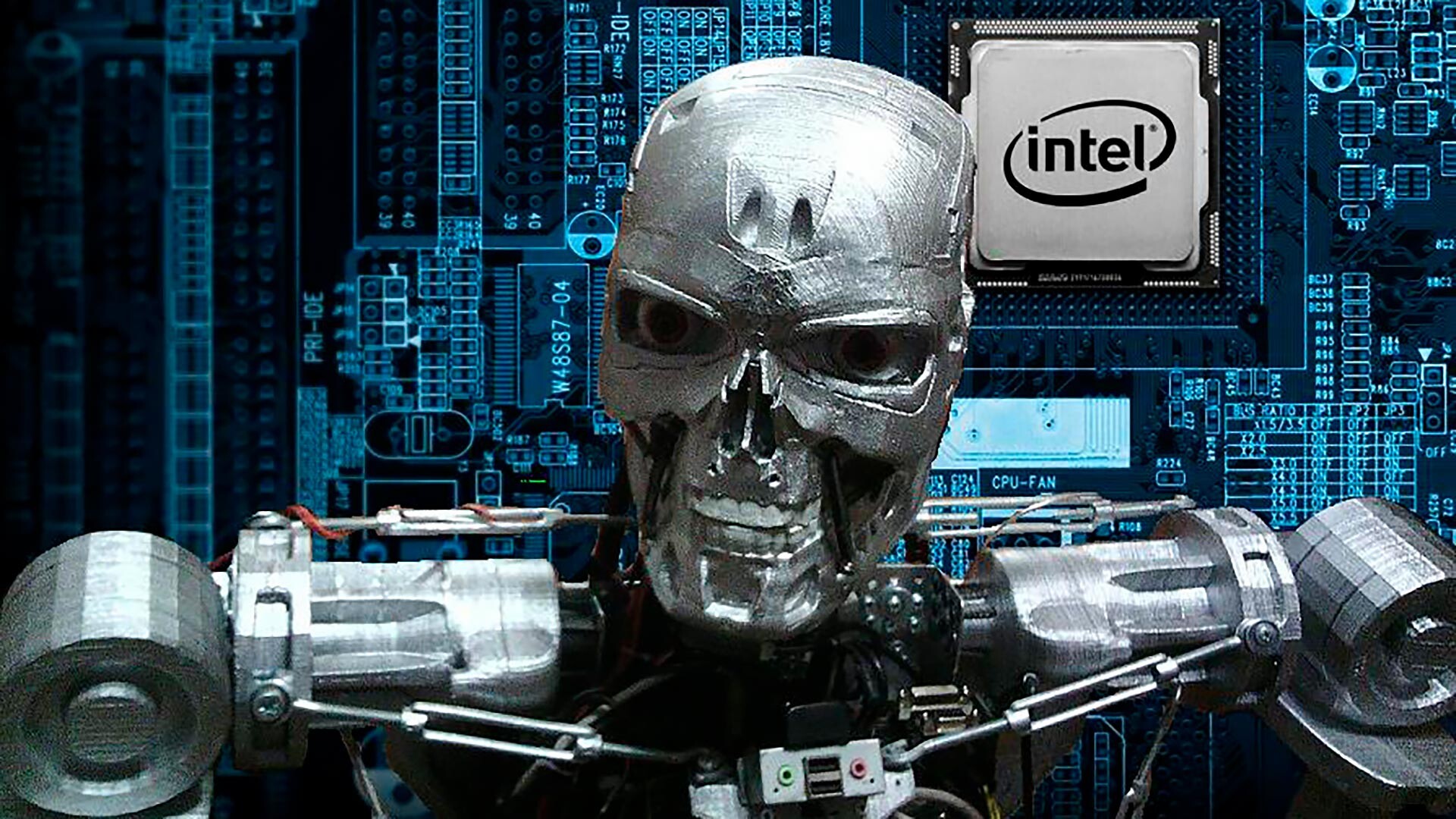 Personal archive of Alexander Osipovich
An inventor from Perm Region has uploaded seven hours of conversations with his deceased grandfather into the Terminator, which is no longer seeking John Connor, but instead sewing curtains with a sewing machine and helping his grandson cope with his loss.

In an ordinary room in a Russian apartment sits a tall, dark-haired man and, across from him, is a robot, Terminator T-800 model.

“Grandpa, how’s your health?” the man asks the robot anxiously.

“I’m not doing well anymore,” the robot replies in the voice of an elderly man.

“And how are you doing?”

“Do you realize you’re dead?” 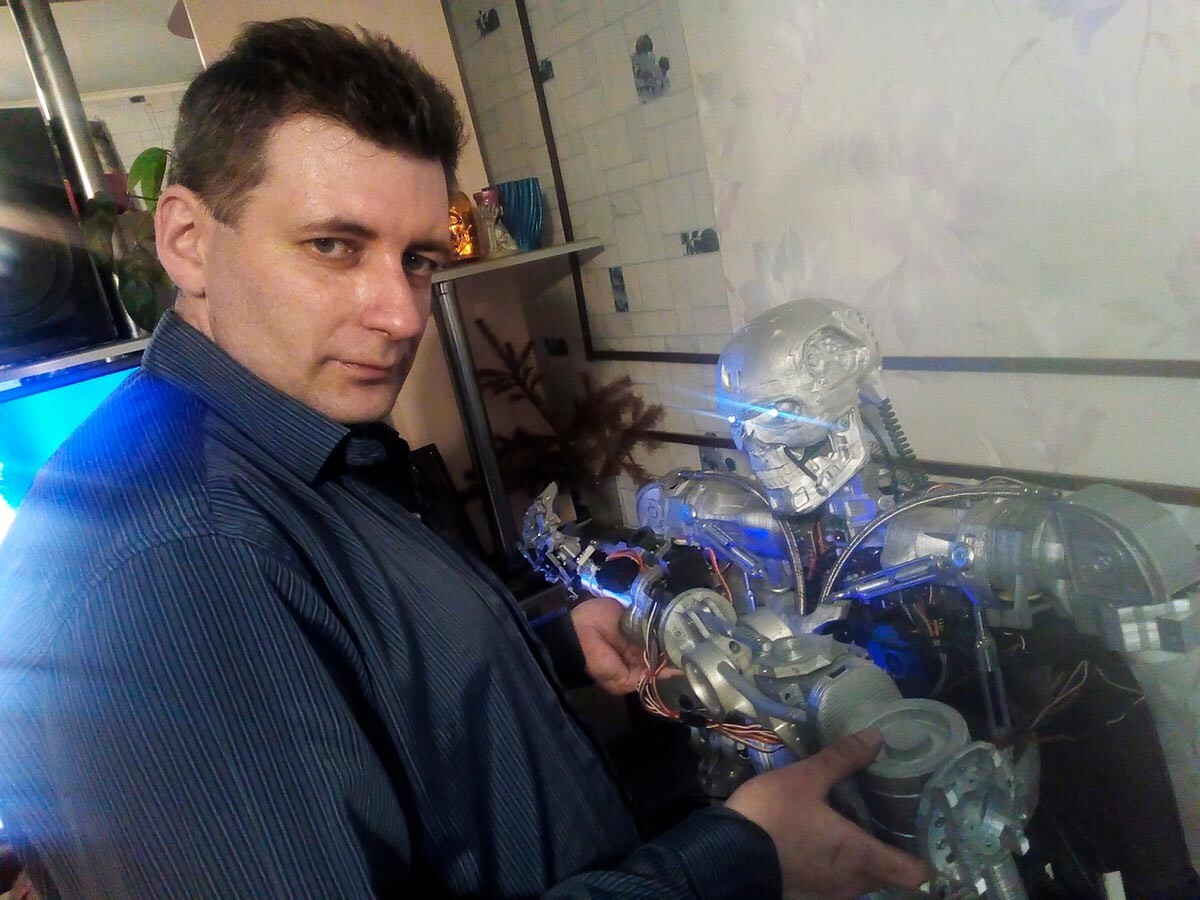 This is a conversation between Alexander Osipovich, a 38-year-old programmer from the city of Kungur in Perm Region and a digital copy of his grandfather, Nikolai Osipovich, who died in 2019 at the age of 92. Alexander created a “consciousness simulation” of his grandfather and then built it into a robot similar to the terminator from the iconic movie, which he designed and 3D-printed himself.

Nikolai Osipovich was a designer at a local factory that made engines and military equipment. He became a laureate of the Lenin Prize of the USSR for scientific and technical developments in the field of guidance systems. 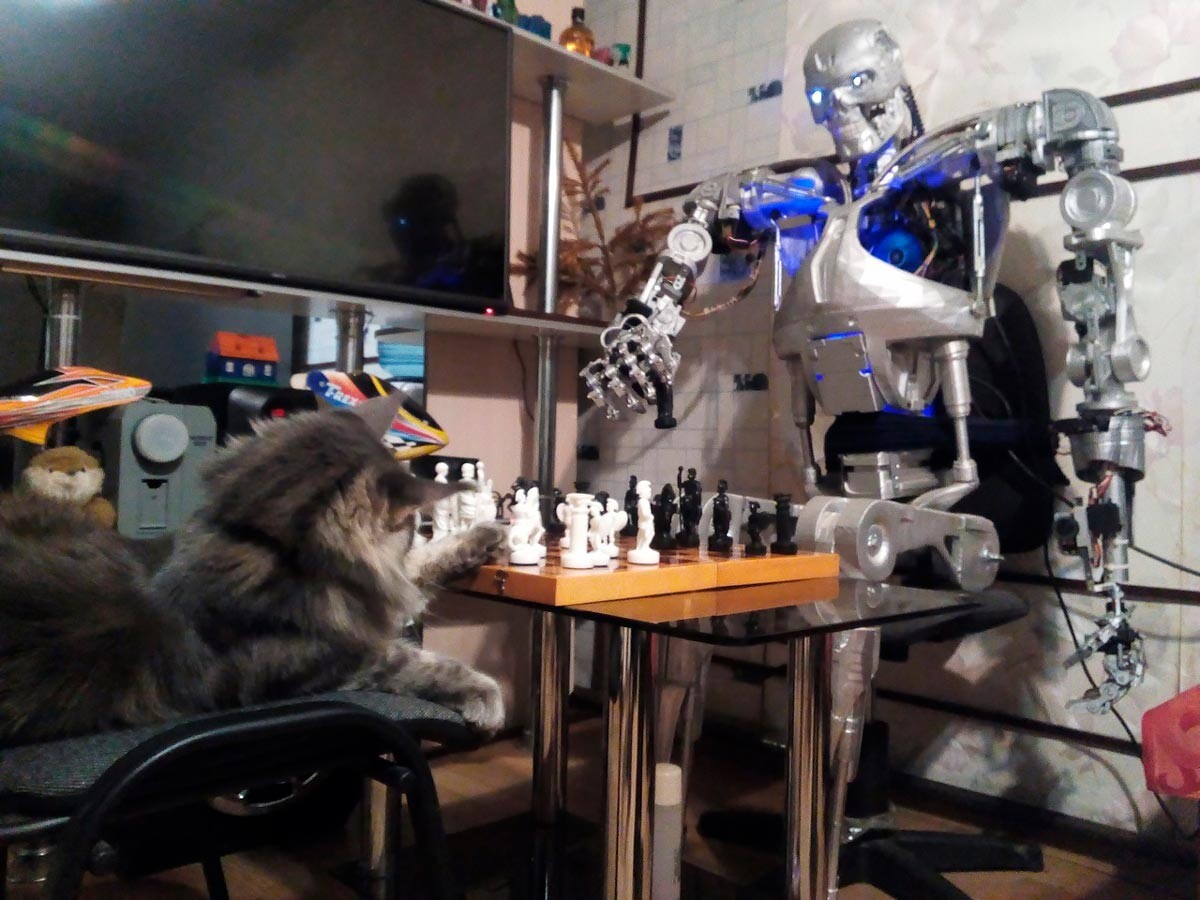 “He was a kind man. His grandfather’s strongest and most successful phrase was ‘You can’t foresee the future, but you can invent it,’ and I will never forget it,” the programmer recalls about his grandfather.

Alexander began making a robot when his grandfather was still alive. Alexander loved James Cameron’s ‘Terminator’ (1984) from his childhood and then he found out from an interview with the movie’s creators that you can build the real deal using the blueprints of the endoskeleton. The idea to load previously recorded phrases into the robot also belonged to his grandfather. 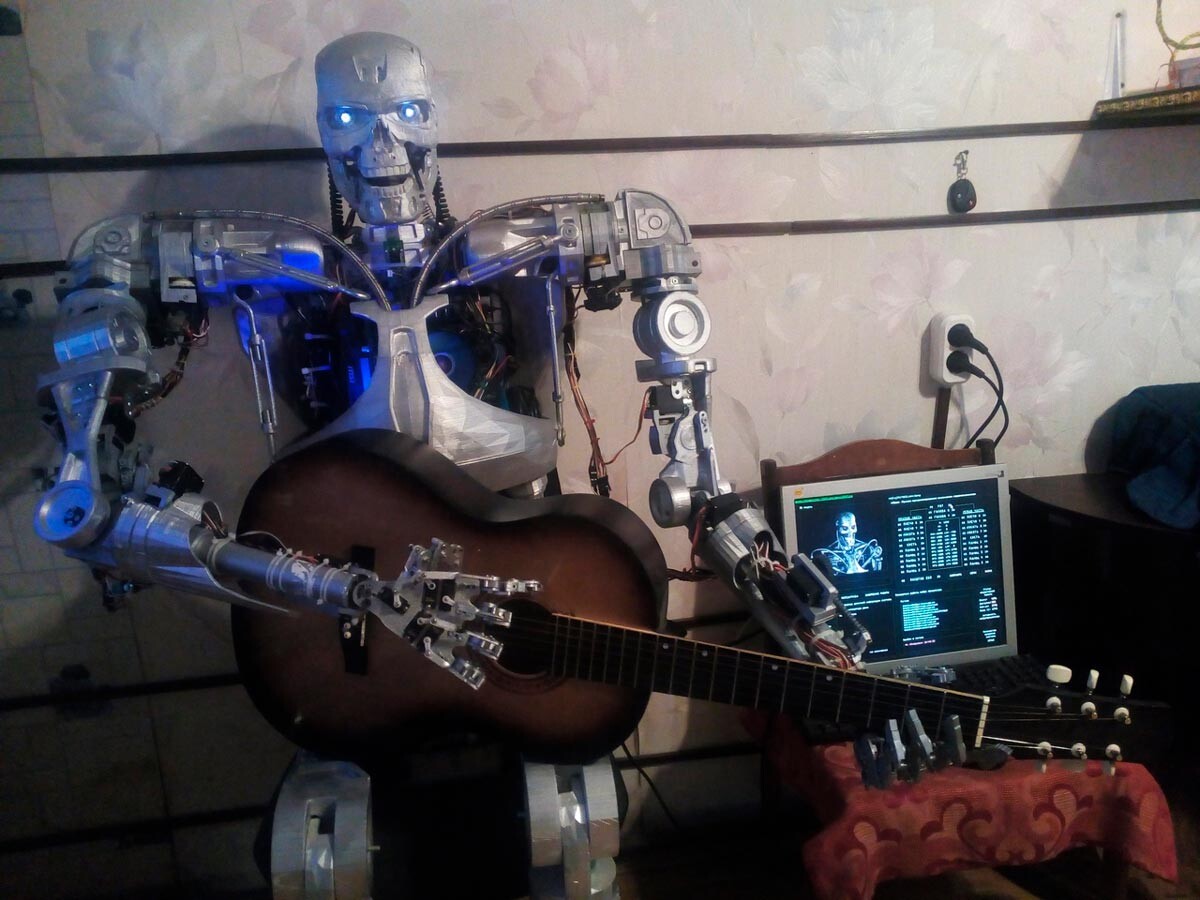 “I started writing the program for the Terminator when I was a kid. I had two Terminators - the first burned down in a fire in 2017, the second one I built for a year, thanks to the help of people who sent money to rebuild it. It’s not the end result yet, but the way the Terminator looks now took me 10 years of my life,” Osipovich explains.

To create a simulation of Grandpa’s consciousness, Alexander digitized about seven hours of videos of him and uploaded them to the robot’s memory. 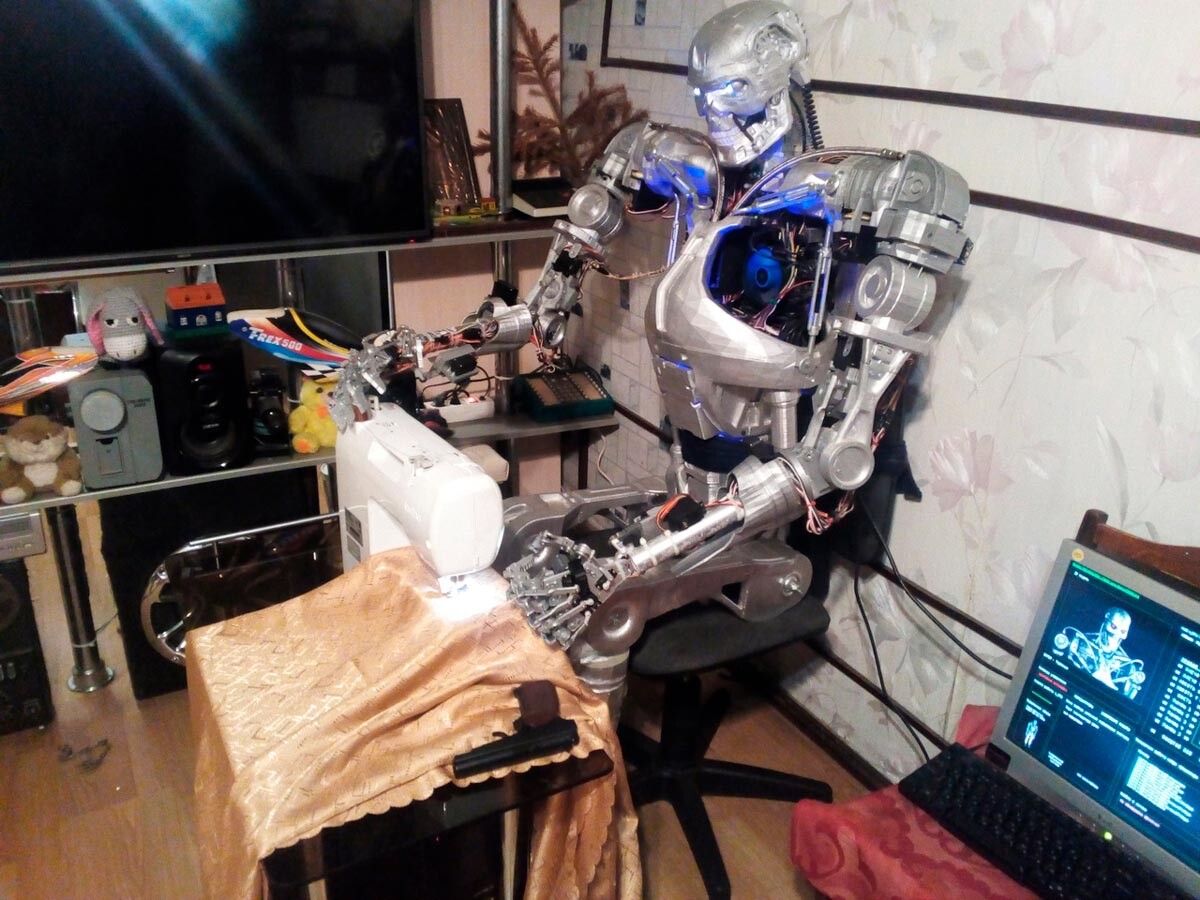 “The neural network in the robot recognizes phrases spoken by the person, assigns a text marker to each word and then puts the phrases back together depending on the result given by the knowledge base for my answer. If there are enough words to answer my question, the program creates a new sentence from them, not previously spoken by the grandfather,” the programmer explains.

If that knowledge base isn’t enough words to answer, the robot answers: “I don’t know anything, I have less information than you do.” 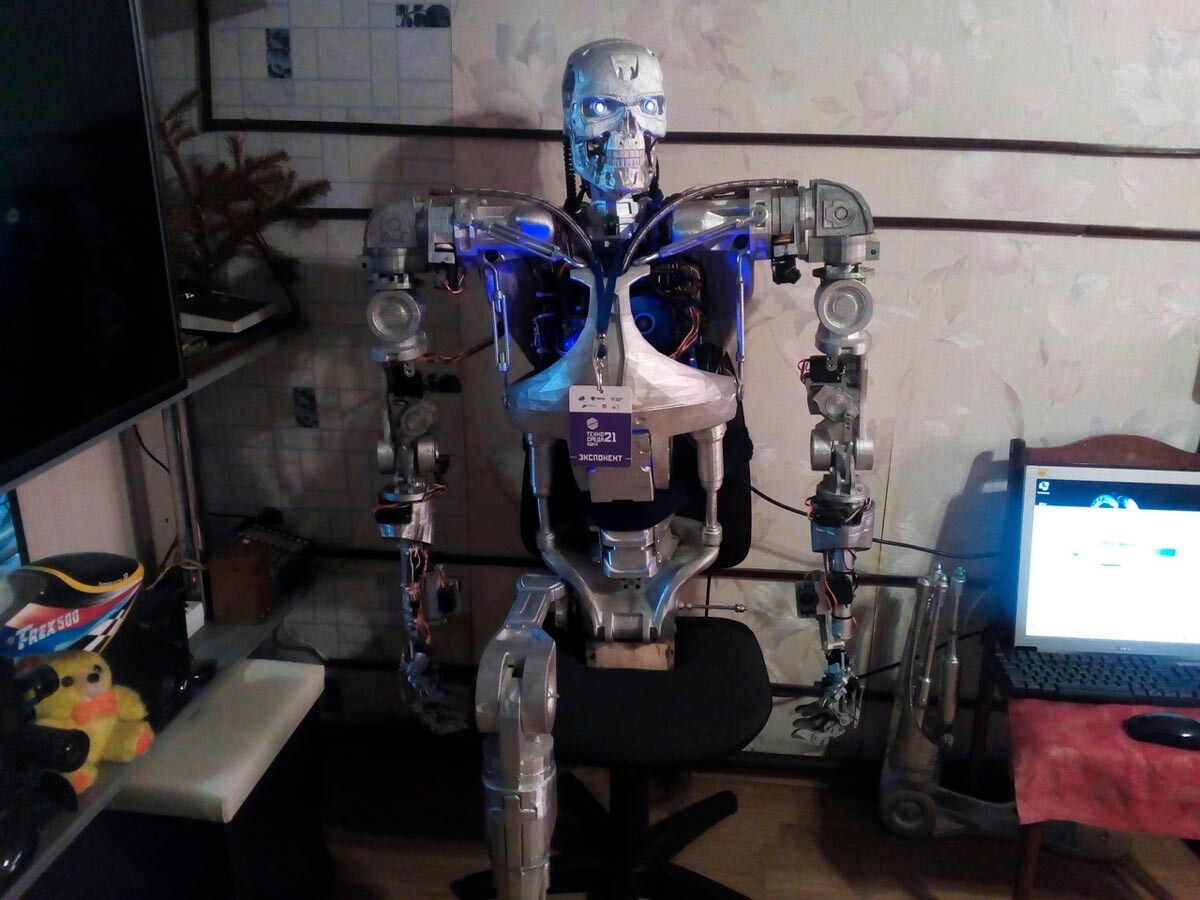 The robot can answer almost any question in Grandpa Alexander’s voice, as well as recognize objects, faces, gender and age. The programmer also equipped the robot with nodes that drive the Terminator’s body in motion. It can play chess, answer emails, talk on the phone and even sew with a sewing machine and shoot a gun.

Alexander continues to improve the Terminator and hopes that his development in the future will help people cope with the grief of the loss of a loved one.