The Sci-fi USSR of the Future (PICS) 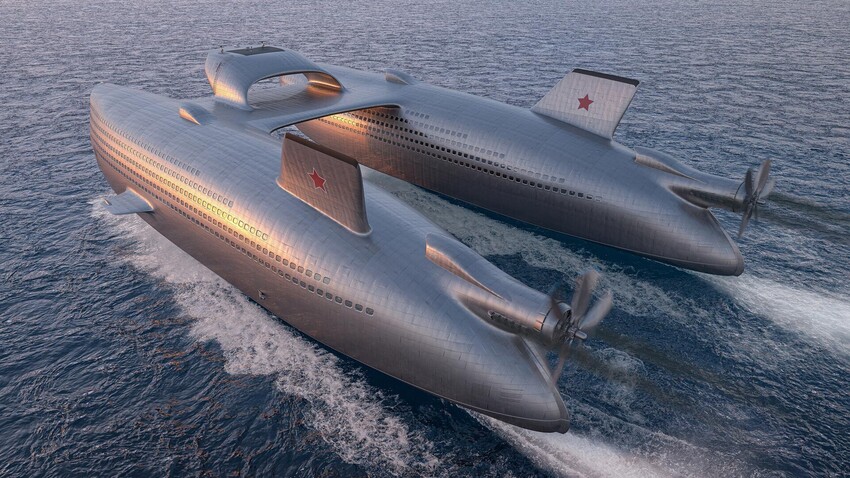 Andrej Troha
Pictures of this Slovenian 3D artist will take 50 years back in time into a Soviet-era romance.

Slovenian 3D illustrator Andrej Troha creates breathtaking science fiction pictures of the Cold War era. His drawings symbolize the prosperity and progress of the long-gone era and turned from an after-work hobby into a company that conducts business with top US film and game creators.

We contacted the man and dug deep into the story behind his jaw-dropping pictures of fantastic metal monsters in the Soviet Era.

Andrej Troha owns an advertising agency in Slovenia. Once he gets home after work, he opens science fiction novels of the 1960s (Ray Bradbury and other writers of the era) and falls into another world, where atomic energy leads humanity to prosperity and allows it to colonize other planets.

Soon, he thought, “why shouldn’t I start drawing illustrations in the same theme?” He decided to stick with the Soviet theme, as it was “full of mythic and secret projects during the Cold War”.

Nevertheless, his drawings concentrate more on civilian projects, rather than the “war machines” associated with the USSR. Due to these drawings and ideas, the artist received a couple of contracts with American studios to produce artwork for video games, as well as a movie starring ‘Hangover’ actor Zach Galifianakis, thus turning his hobby into an even more successful business. 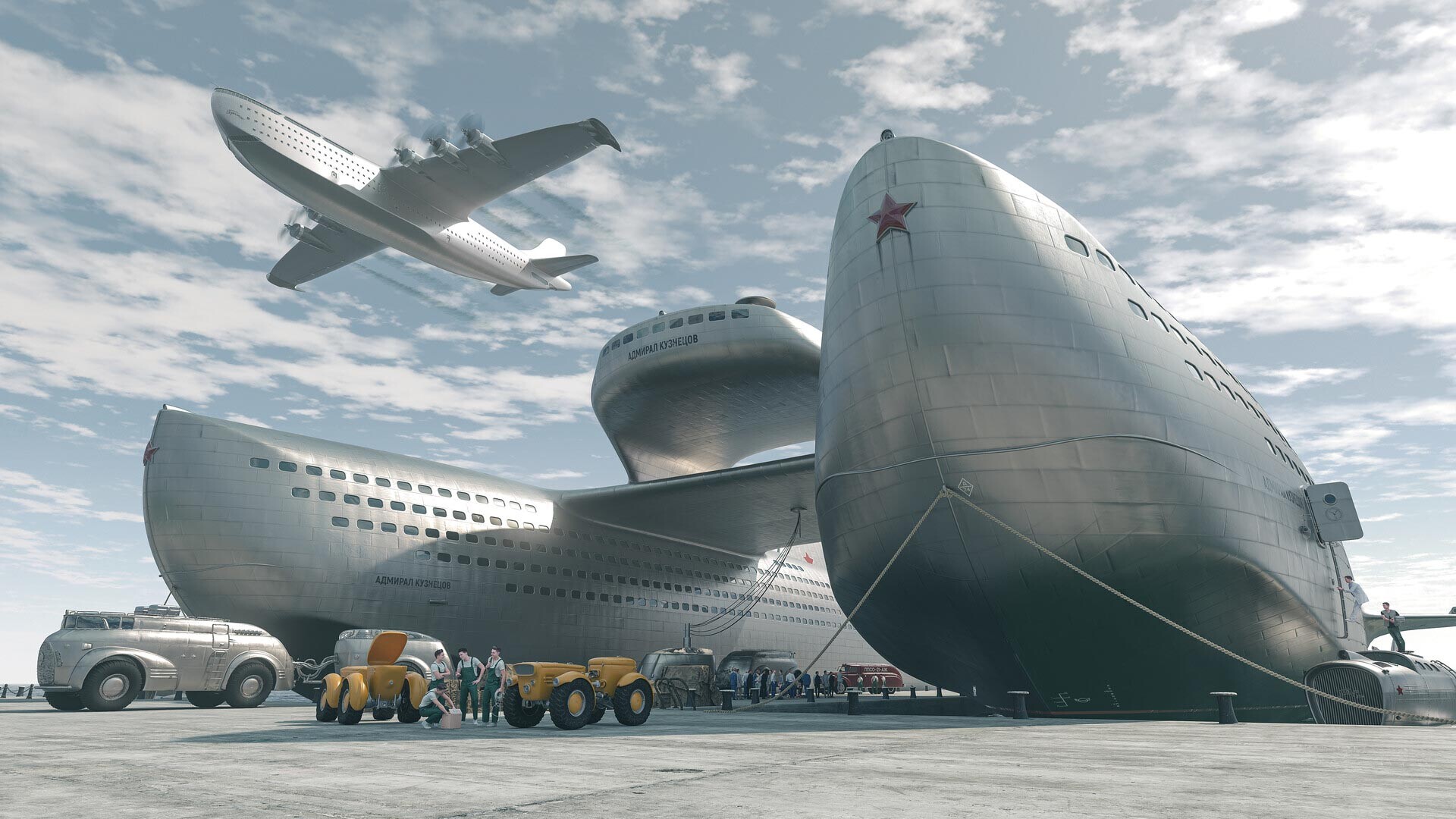 The name of the first project that gained him fame resembles the biggest aircraft carrier of the Soviet-era - the ‘Admiral Kuznetsov’.

Despite the big military “brother”, the sci-fi version was a large passenger ship aimed at connecting the Soviet city of Samara and the Iranian capital Tehran.

It’s an enormous airplane with a maximum requirement of 3000 passengers with the capability to accommodate 150 Conex-class shipping containers and 250 cars. 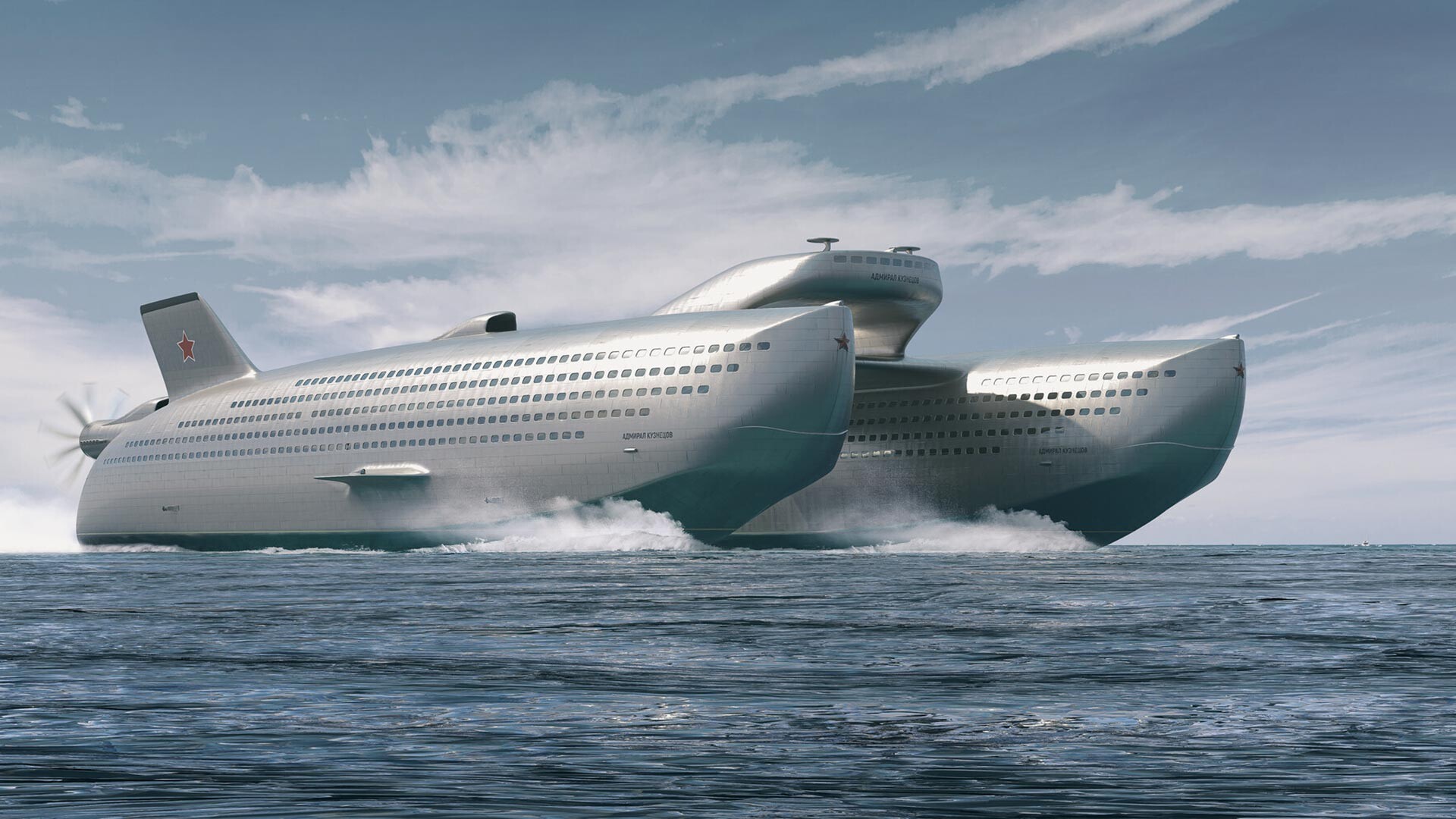 Despite the size, the ship supposedly traveled at a speed of up to 75 knots (approx. 140 km/h).

The whole idea behind the civilian ‘Admiral Kuznetsov’ was to develop regions through trading and become a suitable alternative to regular aircraft. 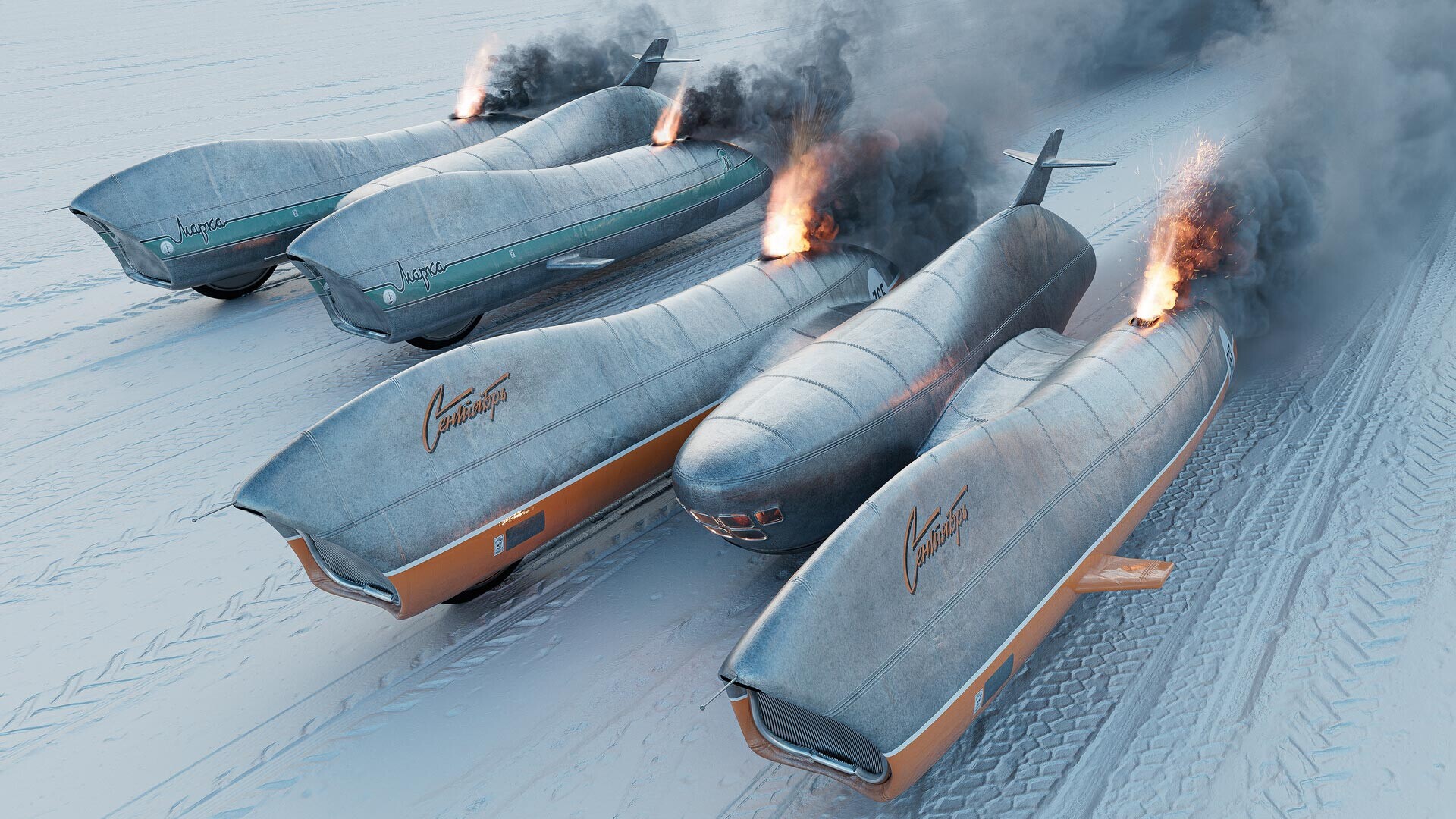 This “racer’ concept was based on the existent racing in the American deserts. Desert spaces are most often used for vehicles to set speed records in our world. In Troha’s world, it was an F-1 speed track for the most advanced vehicles of top military construction agencies of the Soviet era. 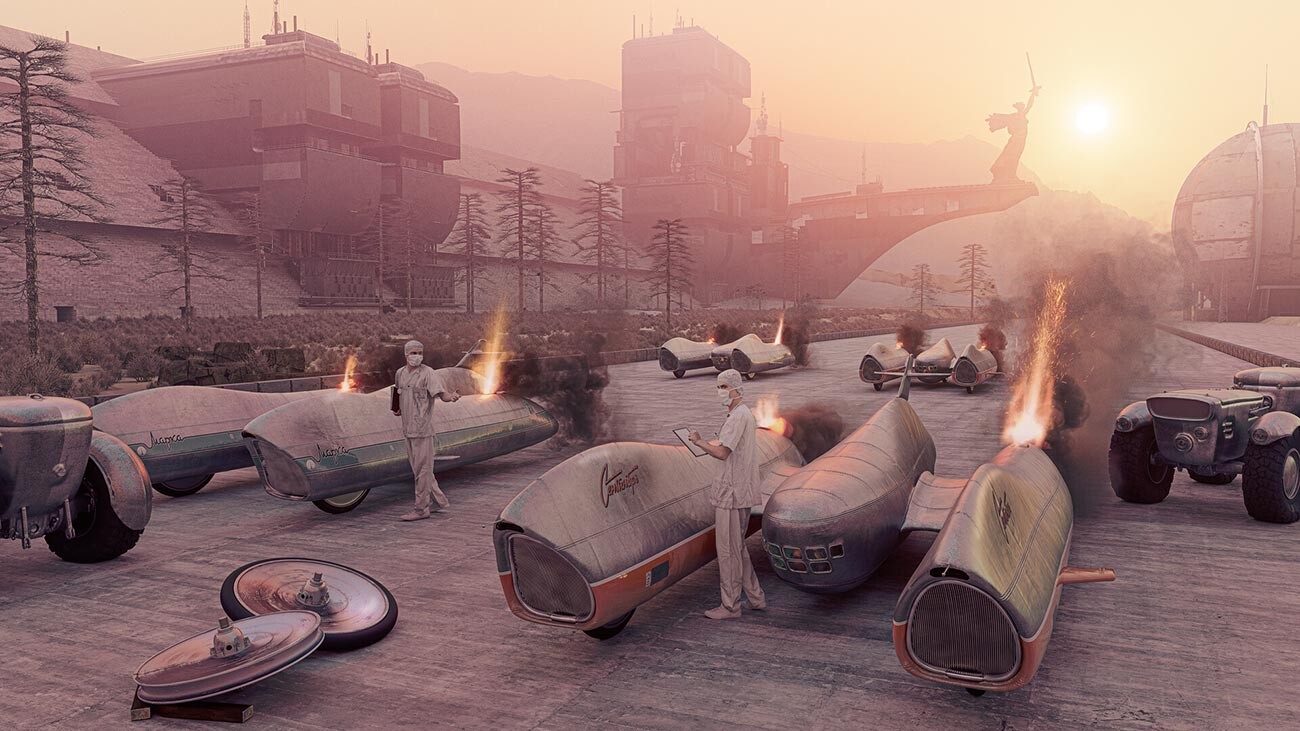 In Troha’s world, the USSR developed the fastest cars in the world and built many race tracks to popularize the sport. They had grandstands and VIP boxes, but quickly fell in disrepair, due to the remoteness of the venues. 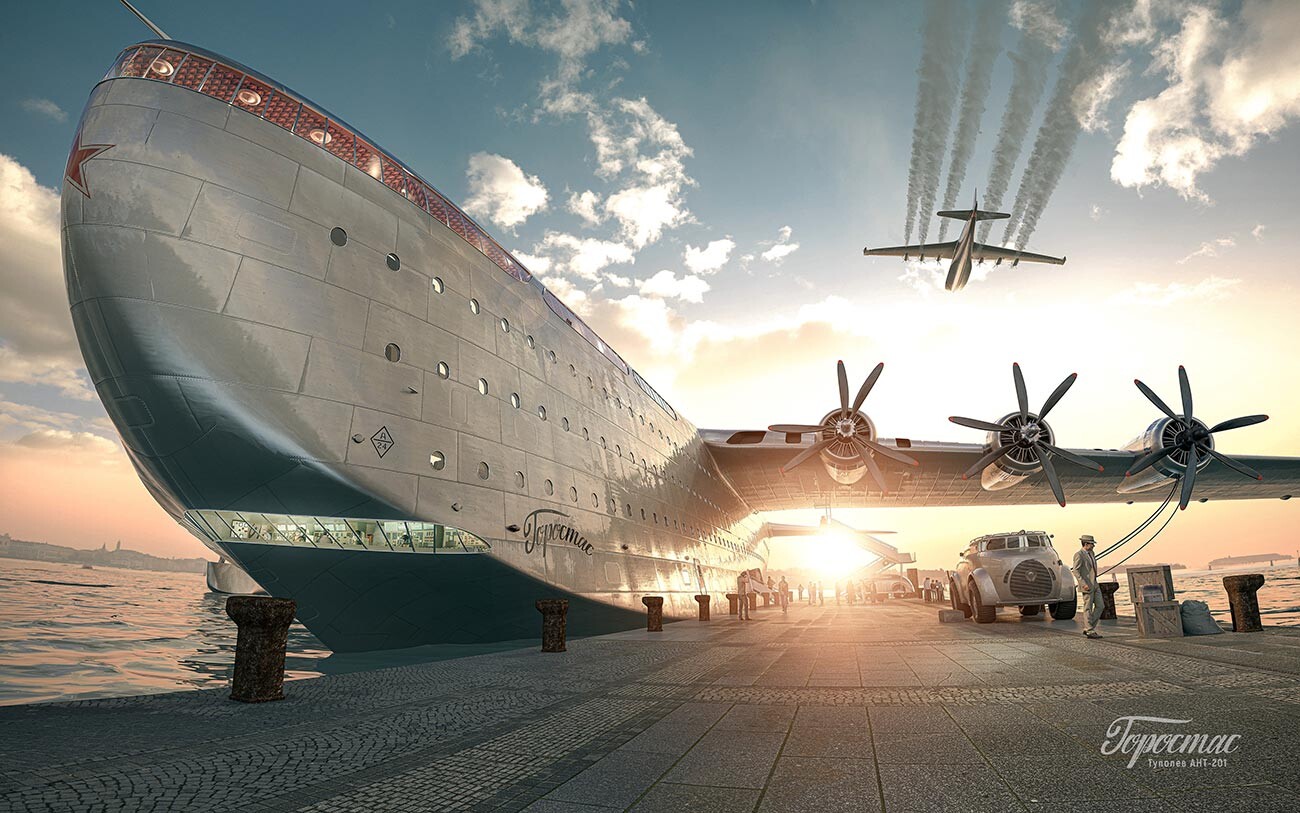 The concept is based on the Soviet’s largest civilian Maxim Gorky airplane - an enormous airplane of the 1930s, created for propaganda purposes to show the world the USSR’s capability of producing the largest civilian ‘birds’ in the world.

The artist showcases a mechanically advanced floating ship with enormous engines on wings capable of crossing the whole country in just 12 hours. 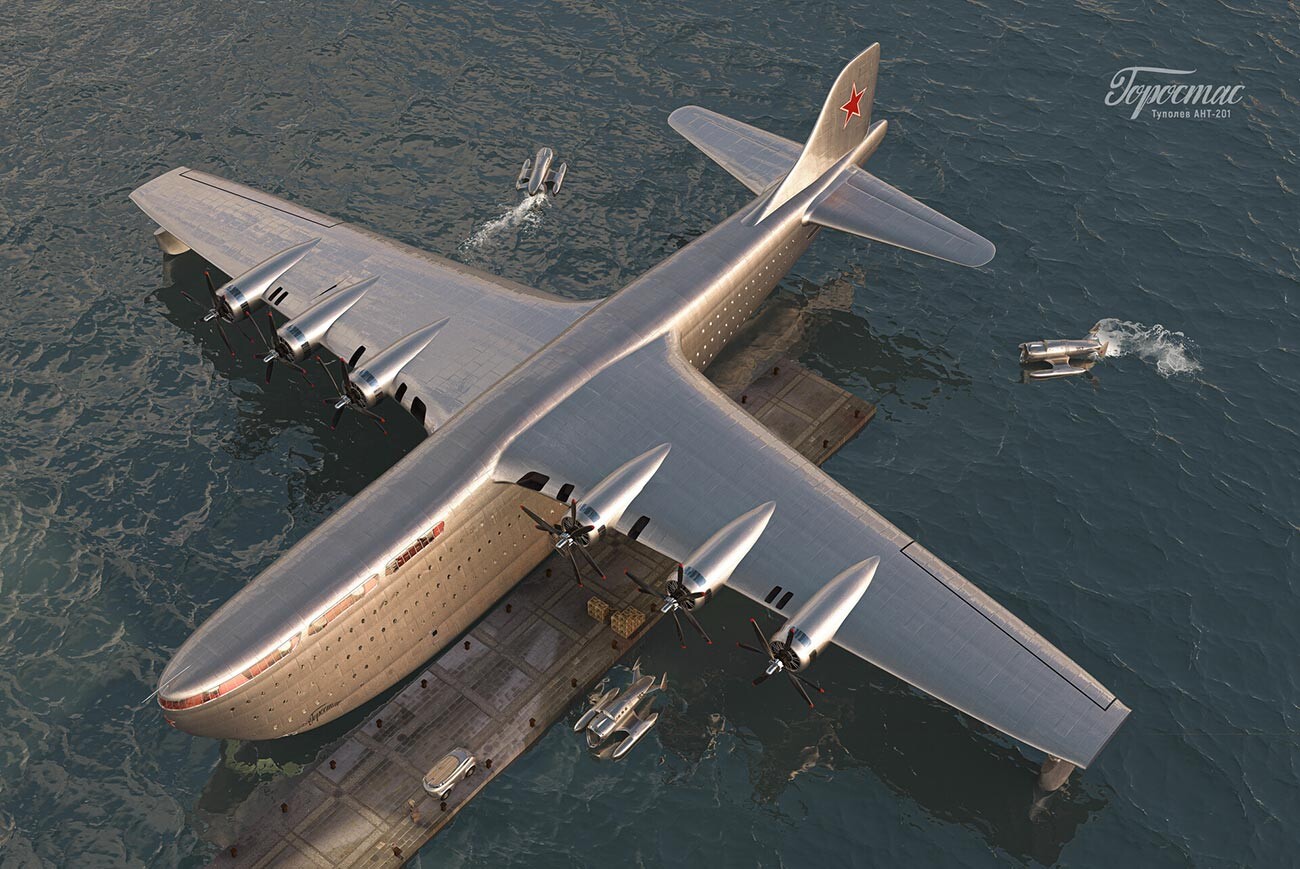 Tupolev ANT-201 ‘Gorostas’ is a combination of a cargo aircraft and a traveling ship. It’s has a capacity of 1,500 on board and “was created by Stalin to populate the Far East of the country”.