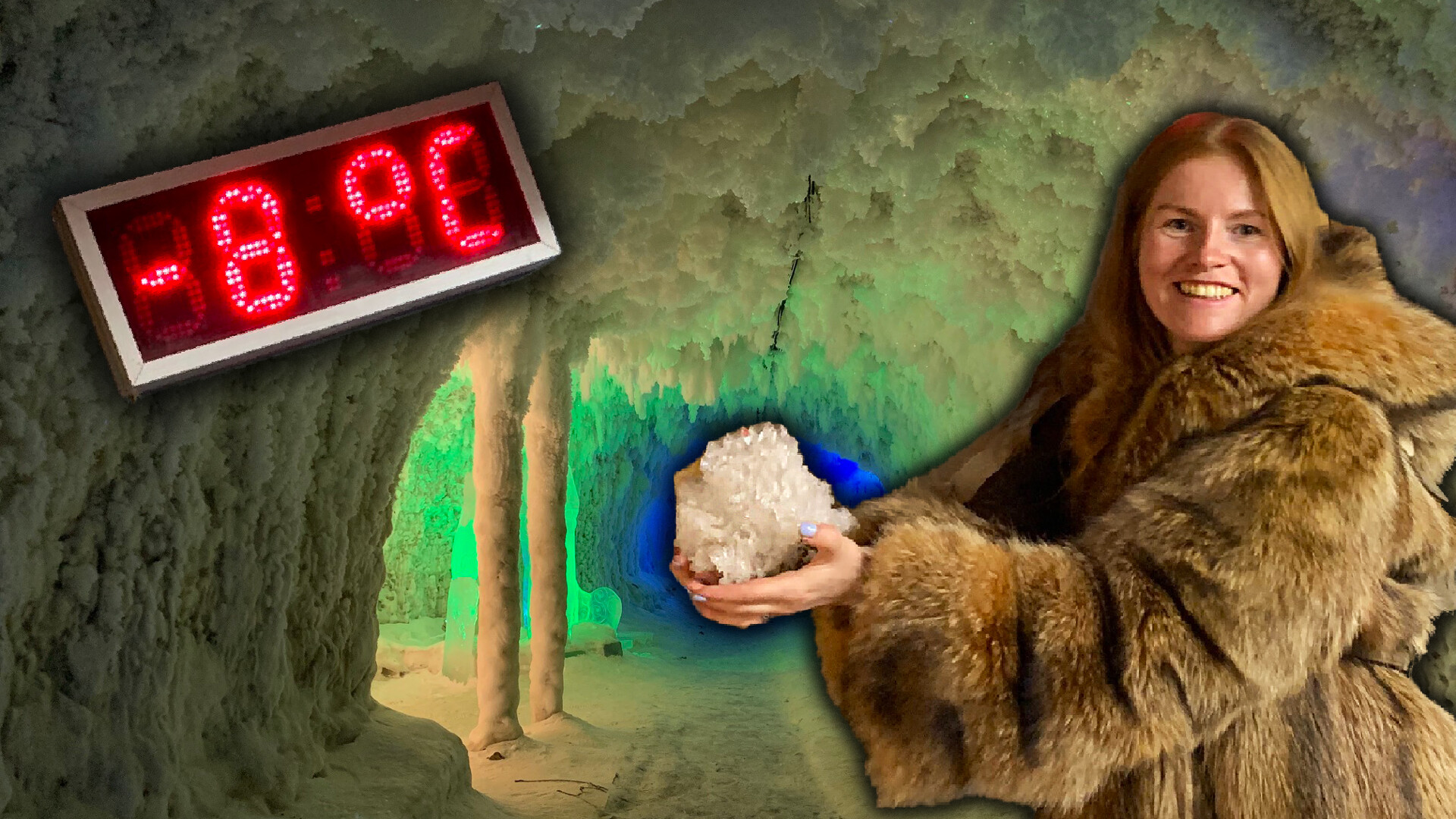 When it's hot outside, it's so nice to touch the permafrost!

Russia Beyond (Anna Sorokina)
In Yakutia, just a few meters separate summer from winter. There are places here where you can always build a snowman or taste fresh snowflakes.

If you visit Yakutsk (about 5,000 km east of Moscow) in summer, you may feel like you are in a desert: baking sun, dry air and wind blowing sand down the street. Now touch the ground! It’s absolutely cold - not having enough time to warm up during the day, the soil immediately cools when the sun starts to go down. And all because of the permafrost (actually, scientists say there is nothing “permanent” in nature, so they prefer the term “perennial frost”). 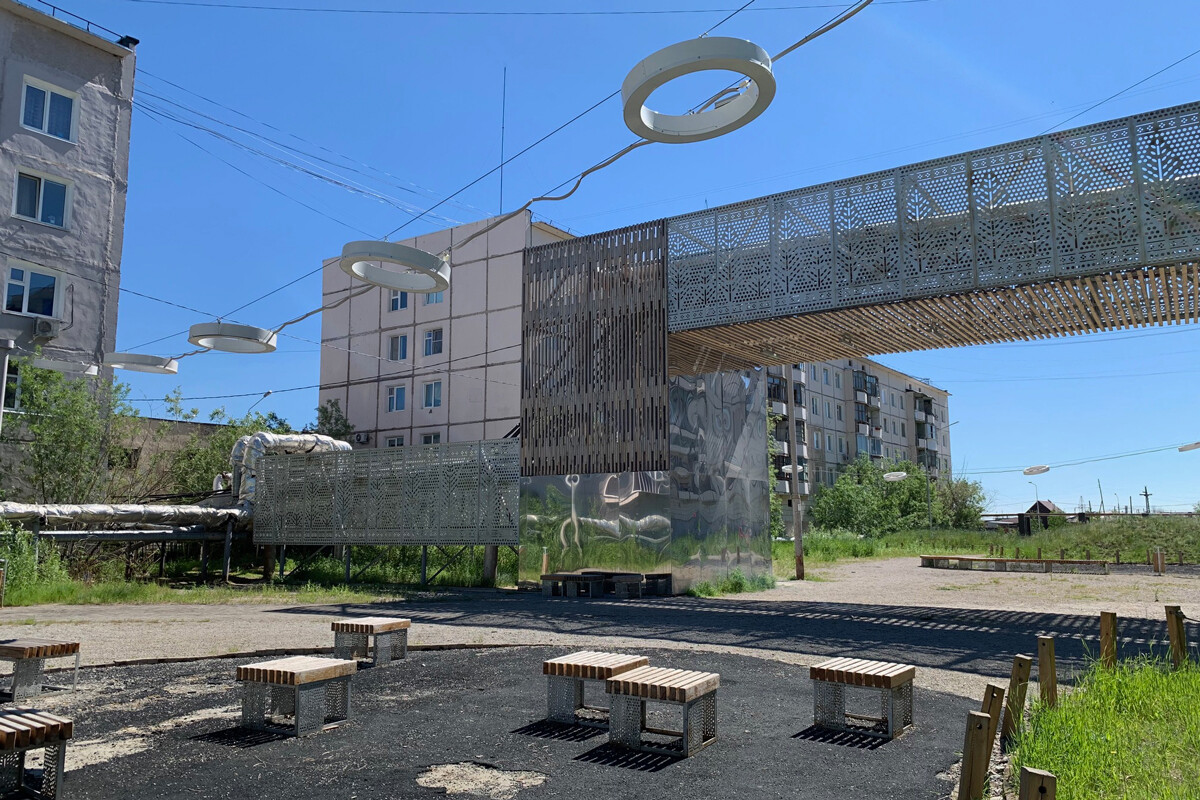 Summer Yakutsk with pipes about the ground.

Permafrost covers two-thirds of Russian territory: houses in such areas have to be built on piles with cables, pipes and other services laid above ground, so that the heat doesn’t melt the ground and buildings don’t subside. Yakutsk is the largest city in the world (350,000 people) built on frozen ground. The climate in Yakutsk is an extremely continental one: minus 50°C in winter and plus 30°C-35°C in summer. And there are also places here where there is a light frost all year round - and it’s right in the city. 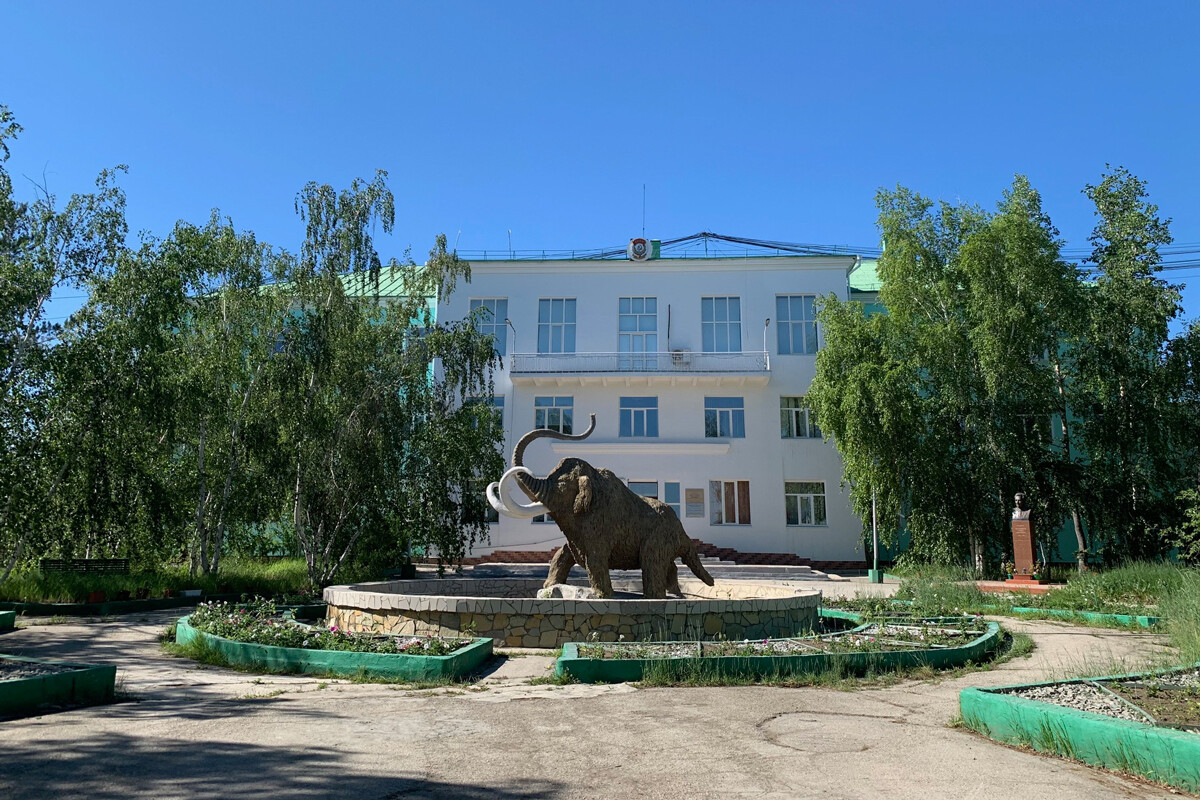 The mammonth at the entrance of the Melnikov Permafrost Institute.

The place where there is always frost is not a museum, but the functioning underground laboratory of the Melnikov Permafrost Institute.

The interiors of the institute look ordinary to the point of being humdrum: doors, rooms, corridors. But that is up to the moment that you find yourself facing a door on which there is an image of a mammoth and from beneath which there wafts a suspicious current of cold air. Behind the door, people are issued with fur-lined coats and winter jackets - for they are about to encounter winter on a tour that is to be led by permafrost scientists. On the surface, it is plus 33°C, but under our feet there is perfectly genuine ice - moreover, natural ice that no-one is deliberately keeping frozen. 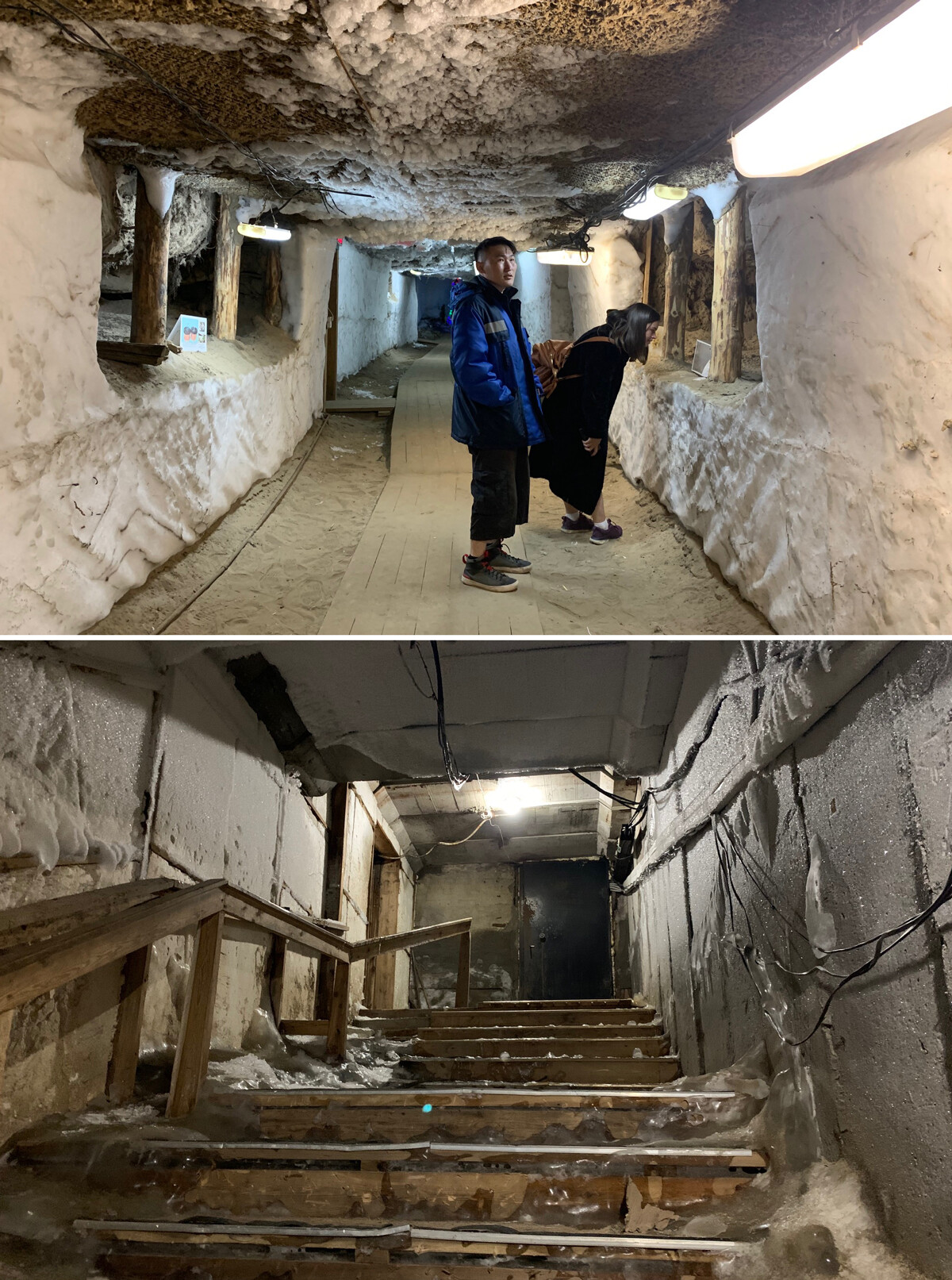 “We have such a concept as seasonal thaw depth, an active layer… In other words, it is when the sun shines and, in the course of a summer, this warm wave reaches a depth of half a meter to 3-3.5 meters - that’s in Yakutia as a whole, whereas, in Yakutsk, it’s around 3 meters. And below that it continues to be permafrost,” explains Nyurgun Baishev, a research scientist at the institute.

The laboratory is situated on two levels and consists of corridors with individual rooms. The top level is at a depth of five meters under the ground, where it is around -6°C. The second level is at 12 meters, and here it is -8°C. The walls of the corridor are encrusted with built-up ice and downy frost crystals form on the ceiling, while the floor is frozen ground with sand. 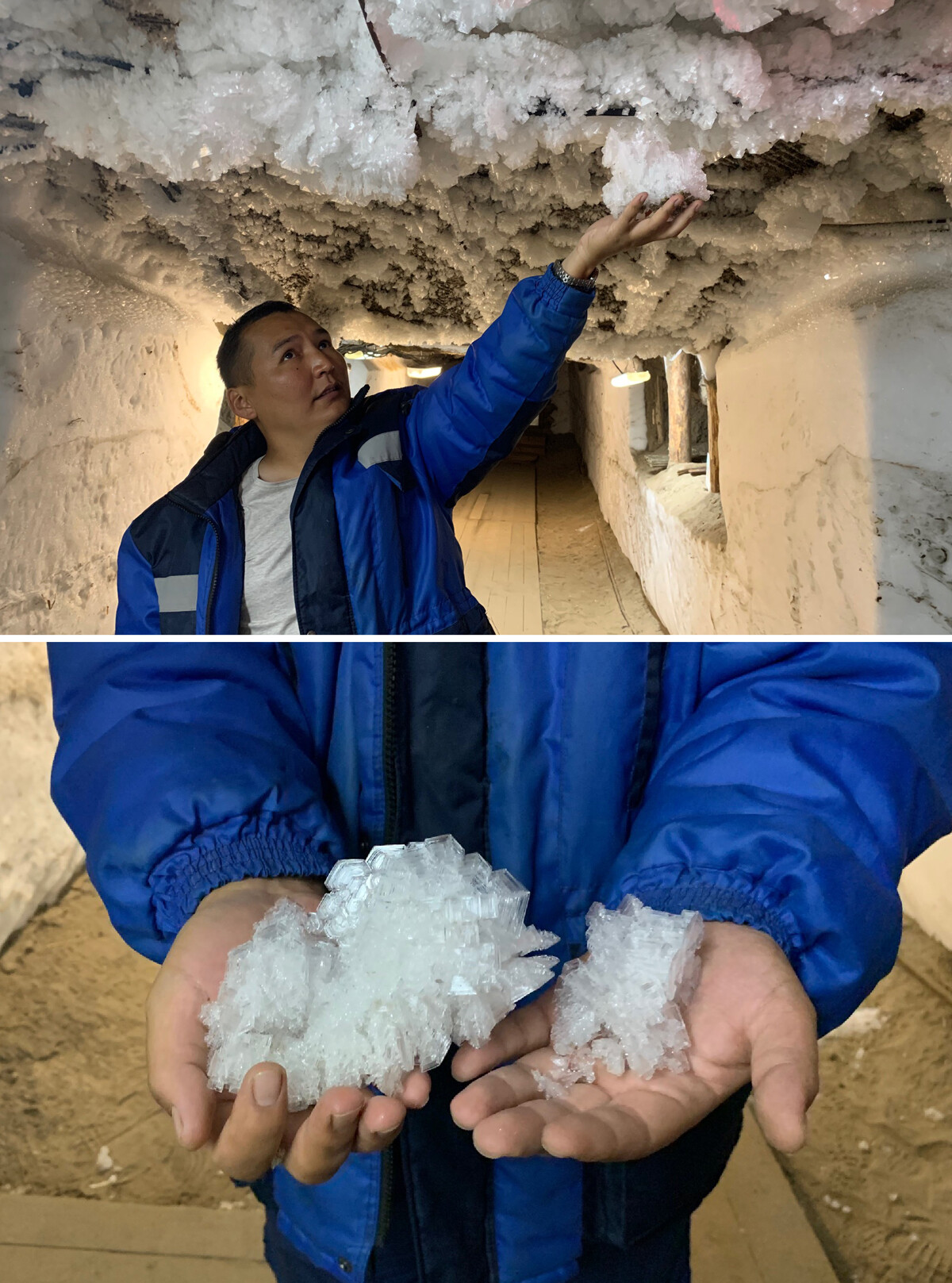 Touching the ice in summer is amazing!

In certain places, you can see particularly clearly that permafrost is nothing more than ice-cold sand and, when you touch it, it crumbles in your hands. In places, wooden supports have been placed in the walls to stop the ceiling from coming down; ice crystals have formed on the posts, too.

The most diverse items are studied in a laboratory: soil samples, seeds that have survived from Soviet times, flowers frozen into pieces of ice and even last year’s snow. “We collect snow from various districts of Yakutsk and send them to the laboratory to check whether its chemical composition is changing,” Baishev says. “Personally, I’ve never seen anything untoward - the water in the city is by and large clean and we have data going back to 1972.” 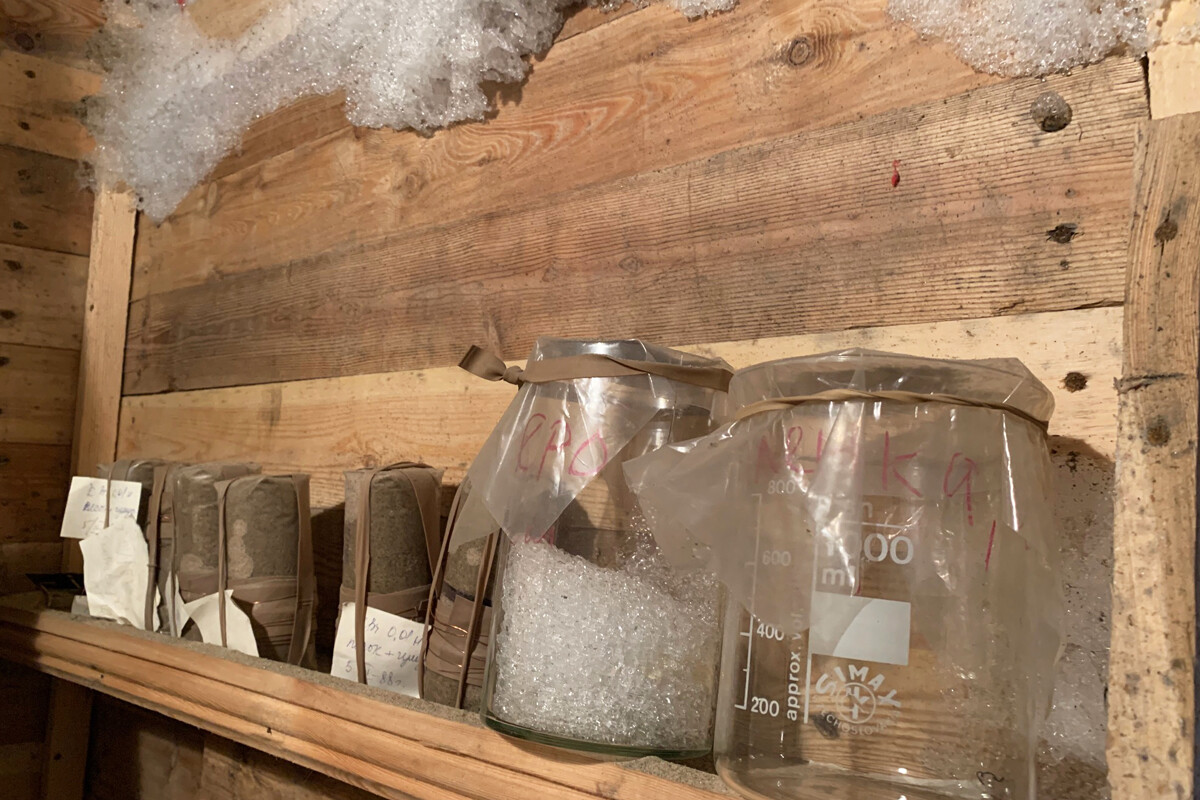 The snow from the laboratory.

To back up what he is saying, the scientist scoops some ice crystals from the ceiling and puts them in his mouth. “Yakutsk ice cream,” he jokes and encourages the visitors to take a sample for themselves. To be honest, in taste it’s like perfectly ordinary ice with nothing added. 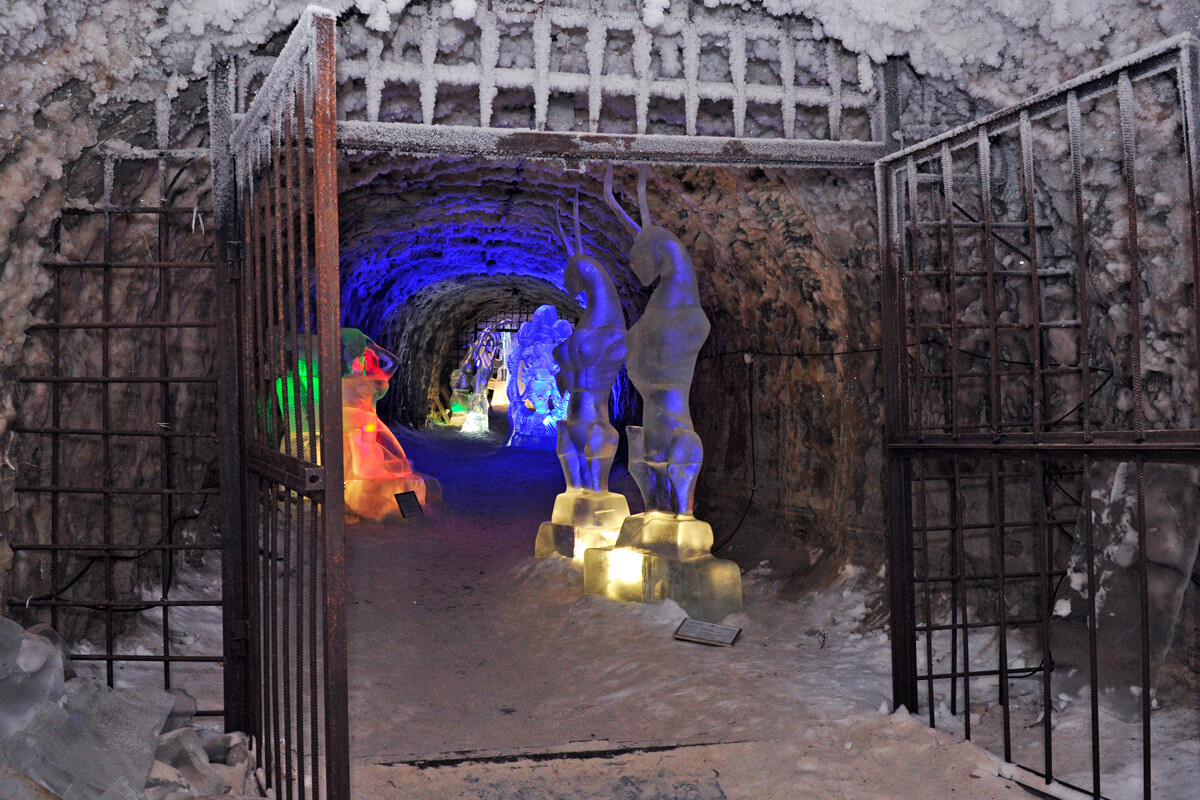 Entering the "Kingdom of Permafrost".

To experience permafrost, you sometimes don’t even need to go underground. In the 1980s, a tunneling machine was used to cut a natural ice warehouse inside Mount Chochur-Muran (roughly 5 km from the city), in order to build a storage facility for foodstuffs. Despite the fact that the facility is at ground level, the temperature inside it is at a stable minus 4°C to minus 10°C. A tourist attraction was opened here in 2005 called ‘Kingdom of Permafrost’ - a network of chambers and caverns, each of which houses themed sculptures. 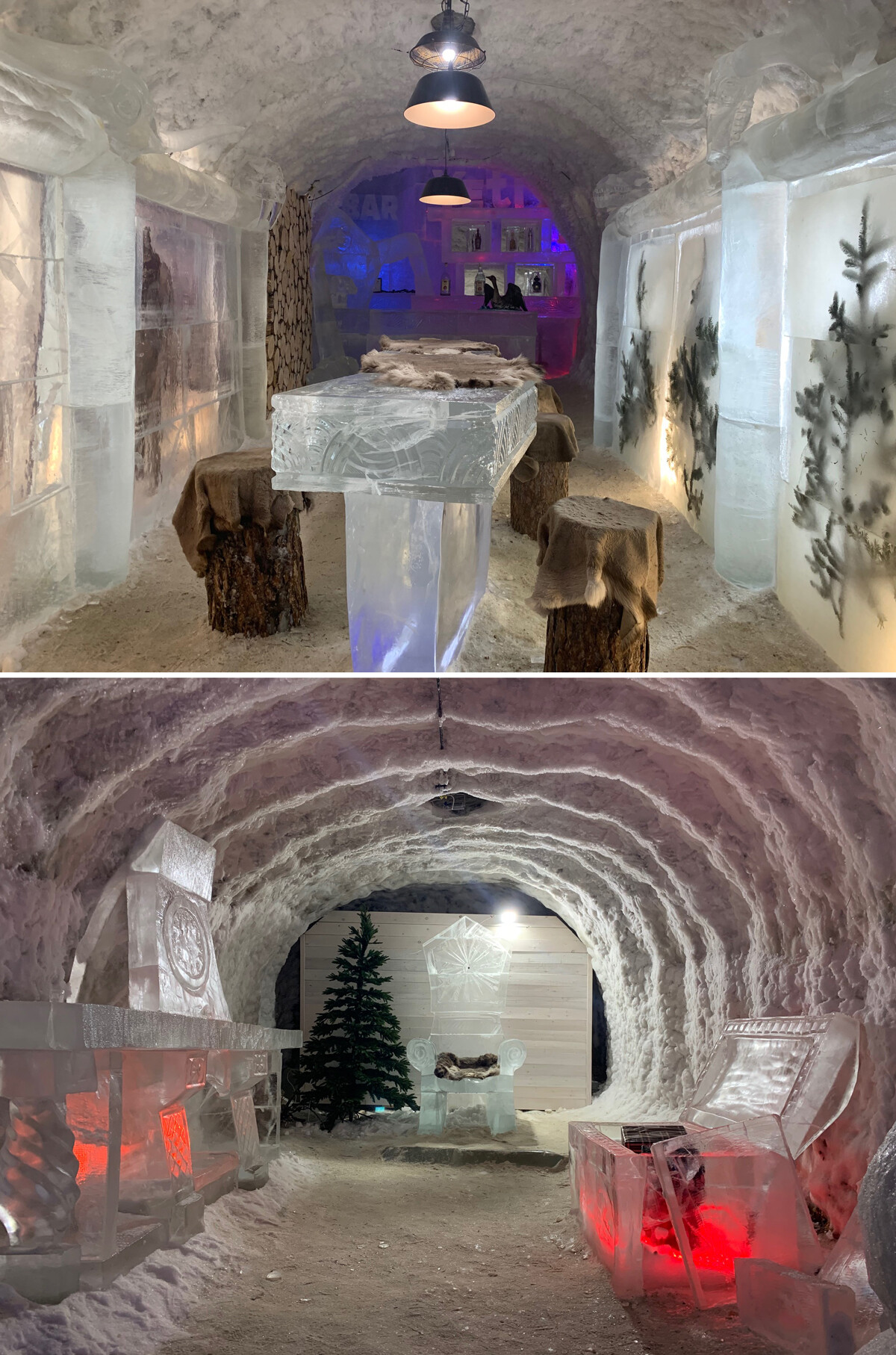 Yeti Bar and the Chyskhaan's throne.

There is an Ice Hotel with an enormous bed made of ice in the middle and, a little further on, a Yeti Bar where visitors are greeted by a Chuchuna, as locals call the Abominable Snowman. Then there is the throne room of the Yakut Grandfather Frost, who is known as Chyskhaan and a romantic love seat with pink hearts and a quote from the Beatles that is as permanent as the frost - ‘All You Need is Love’. There is also a tradition of sticking coins to the ice sculptures - it’s for luck, people say. 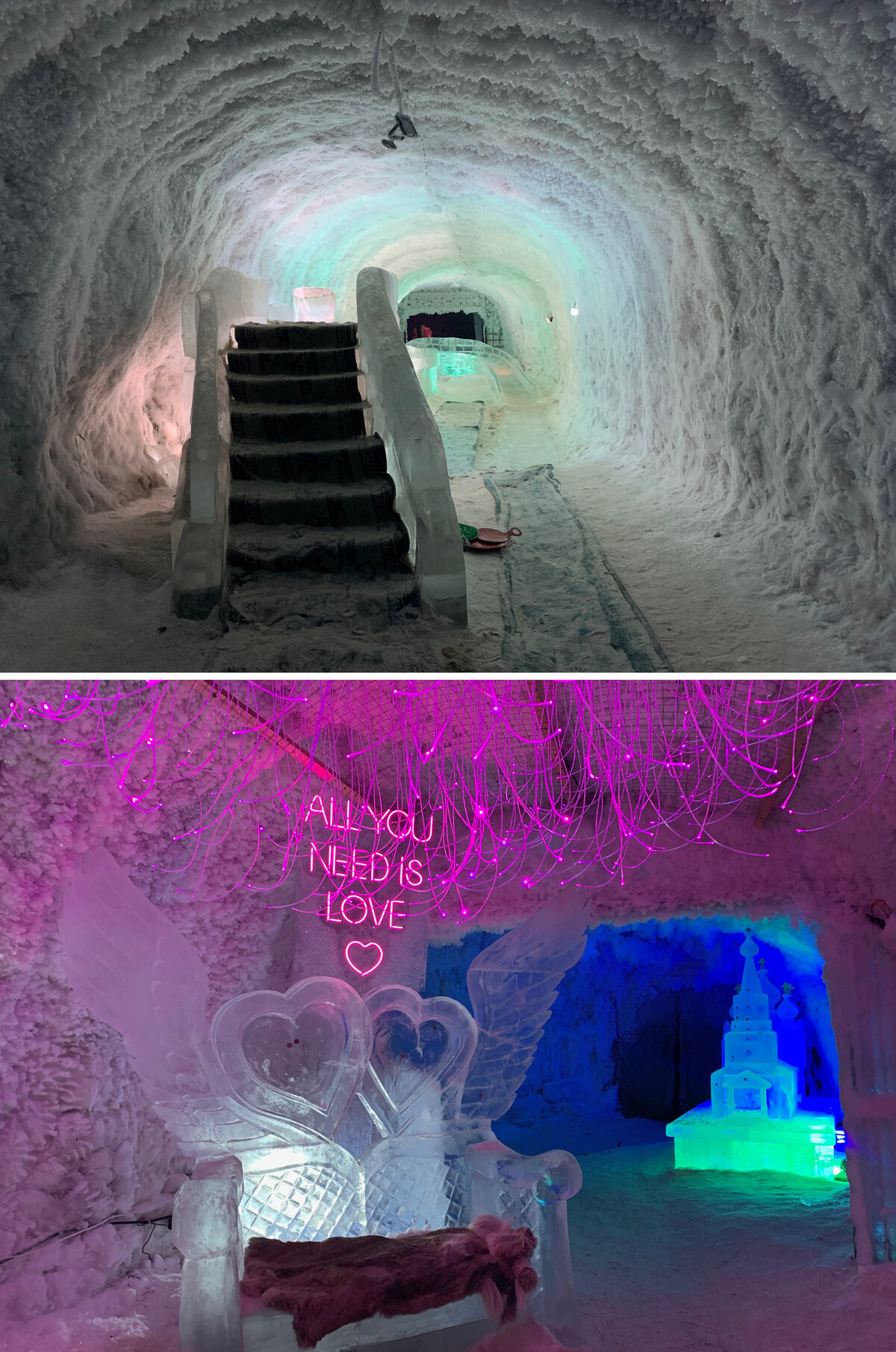 Permafrost only began to be seriously studied in Russia in the 1930s. At first, this work was carried out at the Institute of Permafrost Studies in Moscow and then, in 1960, the research center relocated to Yakutsk - to be close to the permafrost itself. In the city, it extends to a depth of 250-450 meters under the ground, while the maximum permafrost depth in the region is 1.5 km (in the upper reaches of the River Markhi some 1,000 km northwest of Yakutsk). 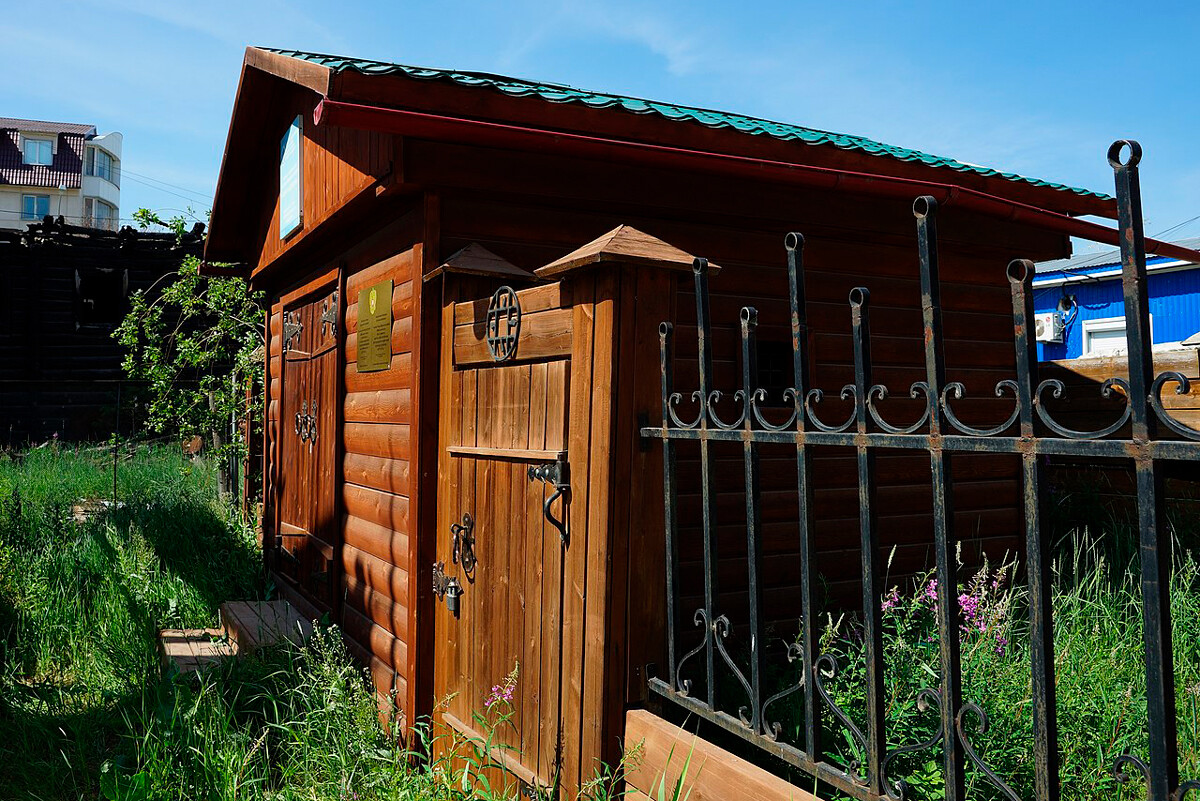 The institute incorporates 10 laboratories (six in Yakutia and four in other places with permafrost), as well as the almost 117-meter deep Shergin’s Shaft in the center of Yakutsk. It was sunk in 1828 when people were looking for water under the permafrost. Water was never struck, but the well became a veritable treasure trove for researchers and gave birth to the science of geocryology or permafrost studies. Scientists in Yakutsk study not only the processes taking place within the permafrost, but also the way in which it interacts with man-made infrastructure. In other words, they are concerned with the question of how to live in permafrost without destroying it. The further construction of buildings, roads and factories would be impossible without these investigations. 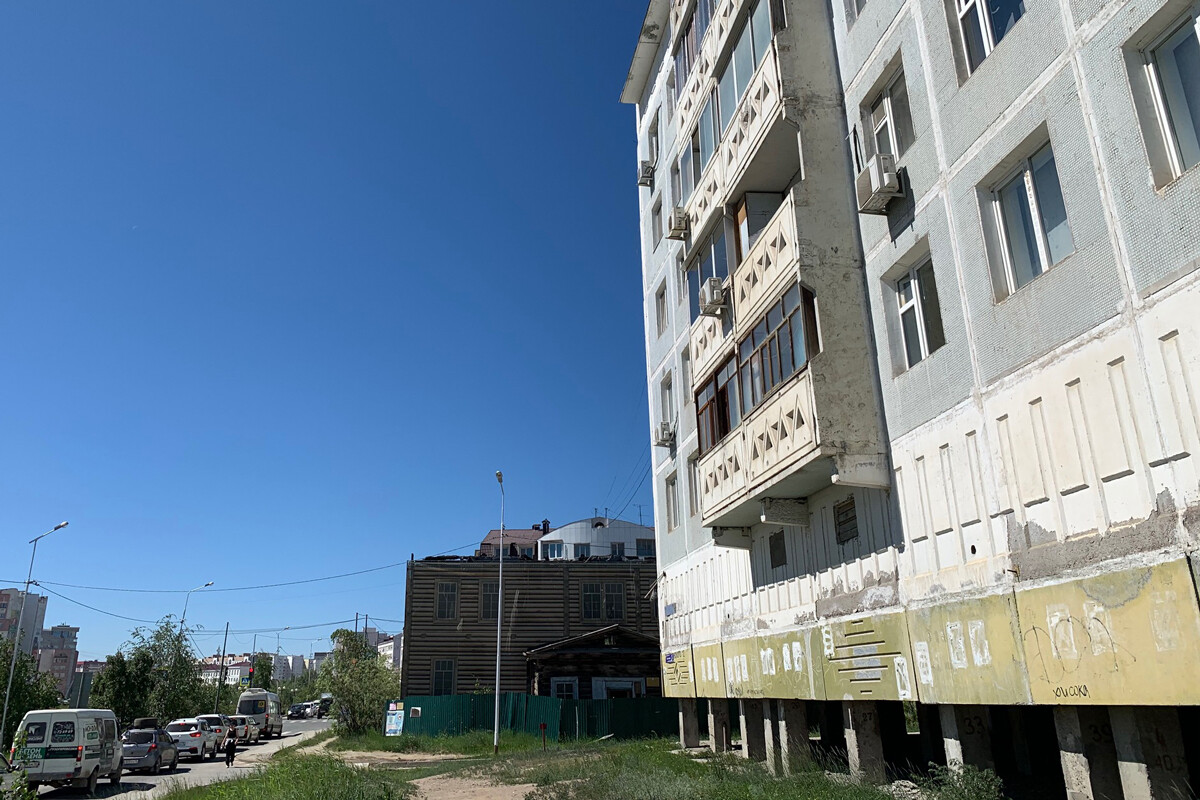 Shergin’s Shaft is located in the ordinary Yakutsk yard, surrounded by Soviet panel houses on piles.

A lot of attention is paid to climate change: it gets warmer in Yakutia with each passing year. “We compare average annual temperatures in 30-year periods: 1961-1990 and 1991-2020,” says leading research scientist at the Permafrost Institute and at the Arctic Innovation Center of the North-Eastern Federal University Nikita Tananaev. “So far, we can see that the temperature has risen by 1.3 degrees in Yakutia as a whole. The steepest rise has been in Nizhnekolymsky District (in the northeast of the region), where the increase has been a little above 2 degrees.” Various factors have a bearing on temperatures, including the forest fires, which occur each year.

The view of summer Yakutsk.

“Last year, when Yakutia was burning very hard, CO2 (carbon dioxide) flew out of the republic’s territory alone in the form of direct greenhouse gas emissions from the fire in an amount equal to half the annual industrial emissions of Russia, this is according to various estimates from 1.5 to 2 million tons of CO2,” says the scientist.

At the same time, there has always been an extremely continental climate there, but the difference is that, 20 or so years ago, 30-degree temperatures occurred in mid-July, but now they are happening at the end of June. And the winters are milder, at around -35°C, with temperatures only dropping to -50°C now and again. 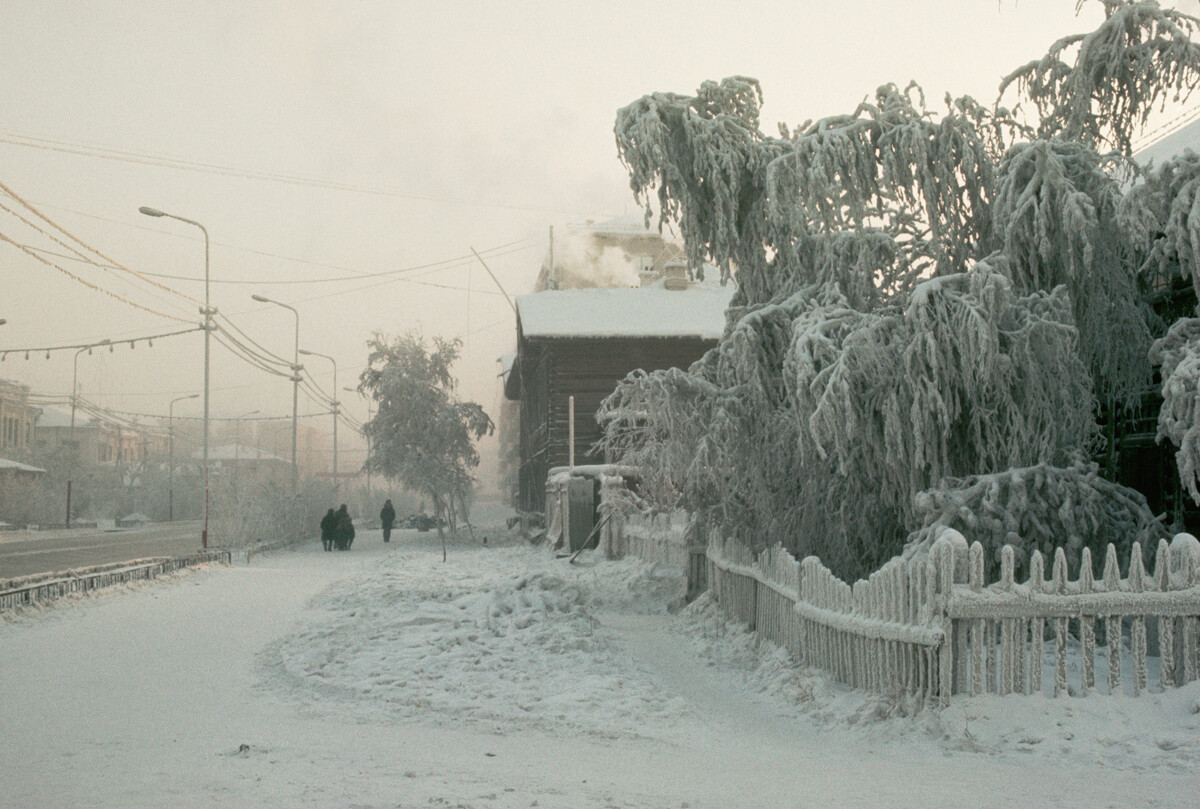 “This means that the permafrost will be thawing a little bit, but the precise extent of this still needs to be worked out,” Tananaev says. “So far, the modeling data say that, by 2100, the first 20-25 meters in central Yakutia will have melted away completely.”