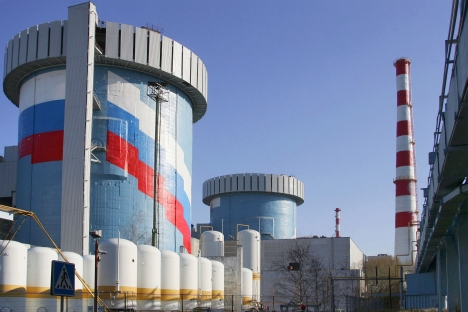 Since its Soviet origins, Russian nuclear research has been confined to state institutions. That is, until Skolkovo, the “Silicon Valley” currently under construction outside Moscow, launched its nuclear cluster. Alexander Fertman, an advisor on nuclear science to the founding President of Skolkovo, says that it was initially decided privately-led research into nuclear power should focus on the “commercial use of radiation technologies (RT).”

“Most people think of RT in the context of medicine,” he explains. “But ionizing radiation has great potential in fields as diverse as security, microelectronics, metallurgy, food processing and environmental protection.”

Siemens was one of the first companies to join Skolkovo's nuclear cluster. The German company came with an ambitious plan to develop a compact solid-state microwave generator (current models of the device tend to be very large in size). Following a $4 million+ grant from the Skolkovo Foundation, Siemens intends to present a prototype in 2014.

"In a sense, this project will mark the end of the semiconductor revolution, which began almost 50 years ago in Silicon Valley,” says Denis Kovalevich, head of Skolkovo’s nuclear cluster. “In the [smaller] solid-state microwave generator, large accelerator lamps will be replaced with semiconductors. This will reduce both the cost and size of the device."

The Minitron company was founded at Skolkovo’s nuclear cluster in 2011 with the goal of developing photo-nuclear detection technology for hidden explosives. The project has the potential to revolutionize air travel safety worldwide.

Currently, X-ray introscopes are used for screening luggage at airports. However, they don’t react in any way to the presence of explosives – this is left for a suspicious security agent monitoring the screen. This human factor leaves room for carelessness, Minitron’s founders are convinced.

A photonuclear detector, however, does not illustrate the baggage being monitored, but draws the attention of security personnel to dangerous explosives within. The object is irradiated by gamma rays that interact with the ingredients used in all modern explosives (e.g. nitrogen and carbon).  The detector automatically analyzes the quality and quantity of the resulting isotopes to give an accurate reading of whether the baggage contains any explosives.

One of the most widely-used applications of nuclear technology is medicine: everything from particle accelerators to radiation therapy form an integral part of cutting-edge cancer therapy. “Russia’s Kurchatov Institute used to be a world leader in this field, but now scientists in the U.S. and Japan have overtaken us,” laments Kovalevich.

To address this, Skolkovo has launched a partnership with Varian Medical Systems, a leading global producer of nuclear medical equipment. The two organizations launched a joint Varian Start-up Challenge this year for advances in the field, with the winner receiving a cash prize and future research opportunities at Varian.

Russian media has criticized Skolkovo for wasting money on fruitless projects, but Kovalevich is quick to point out the number of leading global companies – like Siemens and Varian – involved in their development.

“We give international companies an opportunity to set up R&D centers in Russia as quickly as possible. By doing this, they become our partners for innovation and tap into the country’s vast talent pool,” he explains. Skolkovo also acts as an intermediary between foreign businesses and local officials. “Our team knows how to deal with administrative barriers, customs and lots of other problems international business may face in Russia,” he says.