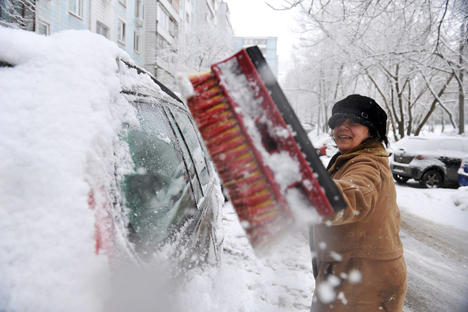 World Wildlife Fund expert Alexei Kokorin comments on the latest Russian Ministry of Emergency Situations forecasts. Why is the climate in Russia and the U.S. changing twice as fast as anywhere else? By how many degrees will the temperature in the Arctic rise by 2050, and what threat does that pose to the planet?

In March, the Russian Ministry of Emergency Situations published forecasts for climate change in Russia. According to the Anti-StikhiyaCenter, the temperature in the Arctic may rise by seven degrees Celsius by the end of the 21st century, as a result of global climate change.

Experts note that the rate of climate change on Russian territory over the last hundred years has been between 1.5- and 2-times faster than elsewhere in the world. In addition, in the last decade, the speed of warming in the country has increased several-fold, compared with the 20th century.

In the opinion of Alexei Kokorin, coordinator of the Climate and Energy Program of the World Wildlife Fund – Russia, the Ministry’s forecasts may be quite moderate.

“In general, all departments similar to the Ministry of Emergency Situations in all other countries tend to ‘exaggerate’ and come up with forecasts that are often even bleaker than those coming from Greenpeace… Unfortunately, I would agree with the Emergency Ministry’s forecast,” Kokorin said.

Is the Arctic heating up?

The expert noted that a seven-degree rise in the average annual temperature in the Arctic Region would be distributed unevenly between seasons. According to Kokorin, “it will be twofold during the winter period and will barely change during the summer period – so bananas will definitely not grow there.”

“If minus 45 [in the winter] changes to minus 30 degrees, at first glance it makes little difference.

But the difference is there, because the change will be accompanied – especially in autumn and spring – by violent snowstorms and winds, which is very bad for people’s life and work and for any economic activities,” Kokorin said. Forty-five and 30 degrees below zero Celsius are equivalent to 49 and 22 degrees below zero Fahrenheit, respectively.

Is Russia first in line for climate change?

The Russian WWF expert confirmed that climate change in Russia is almost twice as rapid as in the rest of the world. This “lead,” in his opinion, means that the damage due to climate change will affect Russia before other countries.

“Obviously, small island states will have the worst of it: they will simply be inundated and will lose lowland and coastal areas. So today we are seeing in negotiations [at the U.N. on climate change] that they are already raising hue and cry, because they understand they would be in distress while the others look on [with indifference],” Kokorin said.

Calculations show that such consequences of climate change as, for example, a shortage of fresh water and a rise in the level of the world oceans will not affect Russia much.

Yet the frequency of dangerous weather conditions – another possible consequence of climate change – will increase more, the further away from the equator and the closer toward the poles we move.

The difference in the speed of climate change is due to Russia’s geographical position, the expert explained. As the planet’s poles get warmer, the so-called meridian movement of air masses between low and high latitudes will increase.

At the equator and at the poles, there is no such movement, by definition. “The streams of air masses will be biggest between latitudes 50 and 80, with alternating invasions from north and south,” said Kokorin.

“The further we are to the north, the sharper will be the changes in the temperature of the air masses… Of course, other countries in the same latitudes, like Canada and the U.S., are also experiencing this,” Kokorin said.

Will natural disasters be more frequent and more destructive?

Ministry of Emergency Situations specialists predict that, in the coming decades, the global climate will increase the number of major natural disasters, including floods.

Video: Moscow hit by the heaviest spring snowstorm in the last 50 years

The Ministry calculates that more than 90 million Russians (or 60 percent of the country’s population) live in areas likely to be exposed to adverse factors resulting from accidents at vital and potentially hazardous facilities. The annual economic damage from various emergencies may be as high as 1.5–2 percent of the gross domestic product – i.e., between 675 and 900 billion rubles ($28.1–29.2 billion).

According to Kokorin, increased frequency of dangerous weather phenomena represents a more serious consequence of climate change than the relatively rapid growth of the average temperature.

“The most balanced estimate for the middle of the century is that there will be two to three times more of them [dangerous phenomena]. The next question is whether the damage will also increase two- or three-fold or whether we can reduce it,” said Kokorin.

So far, scientists can make such forecasts only for very large areas of the planet, such as the entire northern part of Eurasia or East Asia, and the forecast is essentially confined to two parameters: anomalous temperatures and anomalous, one-off, atmospheric precipitation.