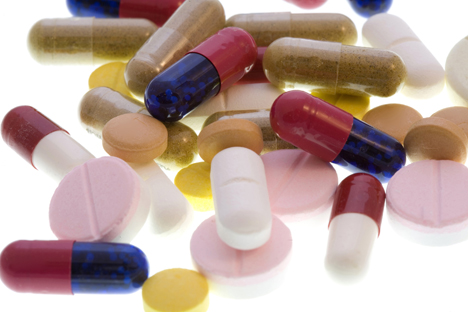 Pre-clinical tests of the pills have revealed some of side-effects. Source : PhotoXpress

Scientists in Siberia have developed a new regenerative drug. During the pre-clinical trials of the pills, scientists noted a number of “side effects” that may become the object of future research.

Scientists in Siberia have developed a regenerative drug that is capable of curing intractable, common illnesses in human beings such as toxic liver cirrhosis. Pre-clinical trials of the pills have also revealed some of the drug’s miraculous "side effects" – revitalization of reproductive functions and a slowing of the aging process.

Siberian scientists have tested on themselves newly developed drugs f{or the treatment of liver cirrhosis – drugs more widely known as “anti-aging pills” – without waiting for the results of clinical trials. The developers said they noticed very positive results that justify the time they have spent working on the drugs, said Andrei Bekarev, director of pharmaceuticals developer Scientific Future Management.

Global scientific center rises in the midst of Siberia's forests

Interra International Innovation Forum to be held in Novosibirsk

The new drug is the result of a joint project between experts from Bekarev’s Novosibirsk-based company and the Pharmacology Scientific Research Institute of Tomsk. Bekarev said that official clinical trials of the new product will begin with volunteers in November 2013, though it may be several years before it becomes available over the counter in pharmacies.

Andrei Bekarev prefers to call the G5 drug – which has been nicknamed “the anti-aging pill” by the mass media – a regenerative drug, since its principle function is to re-enable the body’s own regenerative functions. The drug that was discovered by the scientists almost by accident boosts the body’s production of stem cells, which enable the regeneration of the body’s organs and tissue.

Read more about Science in Russia

“We had a different end in mind when we began working on this product: It was intended for a complex approach to cytokines, which regulate the body’s immune reaction. The data we had indicated that it was possible to significantly decrease the dosage of these drugs during treatment. Once the action of the drug was documented, we started to realize that it might be capable of other applications too,” Bekarev said.

Once the scientists knew the safety level of the drug, they began to test it on themselves.

“One of the Institute staff members was suffering from a severe condition, which is traditionally considered to be incurable. But after some adhesive processes, he made a full recovery. Of course, one lone result isn’t enough to go on – there has to be a full sampling process,” the director of the pharmaceuticals development company told RIA Novosti.

According to the developers, pre-clinical trials of the drug on animals have shown that G5 can cure frequently encountered and intractable illnesses such as toxic liver cirrhosis. The livers of mice which were treated with the drug became entirely renewed.

“The drug has a wide range of applications, but, to register it, we have to choose just one of them. If we chose 10 medical applications, the clinical trials would go on for a hundred years,” said Bekarev.

He went on to explain that the choice to register the drug for its use against liver cirrhosis arose from the potential it offered to have the drug released quickly onto the market. By November 2013, the developers will conclude pre-clinical trials, after which the documentation of their results will be sent to the Health Ministry. Clinical trials can only begin once the Ministry gives the go-ahead.

“It seems probable that the drug will come out in the form of capsules or tablets; the costs will depend on the scale of production. We are doing our most to make it affordably-priced,” developers said.

During the pre-clinical trials of the drug, scientists noted a number of “side effects” that may become the topic of future research.

“When we were testing for fetal toxicity and how the drug may alter the course of pregnancy, we noted a very unusual result. Usually a drug is given in a high dosage and then tested on mice whose eggs are already fertilized; then we survey the number who survive this. Almost 100 percent of the mice which were tested survived and gave birth to healthy mice,” said a representative of the agency.

The scientists thought some error had crept into the result, so they repeated the test. The test results were confirmed, and, in the future, there are plans to research G5’s potential for regenerating reproductive functions.

Still, the real sensation was another effect discovered by the Siberian team – an effect that has resulted in the mass-media dubbing G5 “the anti-aging pill.” As Bekarev explained, they divided 12-month-old rodent laboratory animals into two groups – an experimental group and a control group. The experimental group received the drug orally, by droplets.

“When they reached 18 months we saw a radical difference between the two groups. More than 30 percent of the control group had died of old age, and all the mice showed signs of aging – arthritis in their feet, weight loss, changes in their blood chemistry. But the experimental group displayed body-mass two times higher than the control group, the rodents displayed no signs of aging, and their blood composition corresponded to that of healthy mice,” he said.

The experiment ran on until the experimental group of mice lived for more than 21 months. The scientists have decided to run the experiment again, documenting it this time not as a laboratory experiment, but as a formal scientific study.

Whatever the results may yield, Bekarev emphasized that he is not intending to put out an “anti-aging pill” on the market, because the drug-testing for such use on humans could drag on for a hundred years.

On top of that, as the businessman stated, there are multiple theories about aging. “It’s possible that G5 might improve the quality of life, if not prolong it. Stem cells are not the only thing behind aging,” said Bekarev.