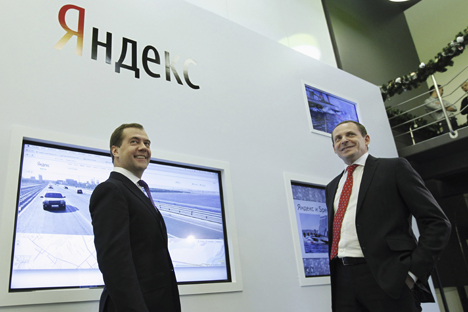 New app brings newswires from several social networks to the television screen and allows users to manage them with gestures.

The California branch of the Russian Internet operator Yandex has developed a prototype software application that enables users to read news from social networks on their televisions. According to a company statement, users can manage the process by physically gesturing.

Tatyana Komarova, a Yandex spokesperson, said that the experiment was a joint effort by Yandex Labs and students and professors of Carnegie Mellon University. The project aimed to develop a new type of personalized and interactive communications system for use with the television.

Because the app is a prototype rather than a final product, it is not yet available to users, Komarova said. Without elaboration, she added that Yandex might use the new application in its products.

The application is based on the Mac OS X platform, with Microsoft Kinect utilized for gesture recognition. It displays news from several social networks on the TV screen, and users can manage the newswires by gesturing. In screensaver mode, the application shows pictures and videos, plays music or displays messages from friends.

According to Yandex, to introduce gesture recognition, Carnegie Mellon University students collected and recorded 1,500 different gestures to be used for tuning up the automated learning system. Yandex Labs was responsible for developing the concept, including the design of the application’s interface and the set of command gestures.

This is the second of Yandex’s most recent developments. In January 2013, Yandex Labs released the Wonder mobile search application for social networks. However, Facebook blocked use of Wonder with its system.

“One of Facebook’s rules for third-party developers is that they must not include data obtained from Facebook in any search engine or directory without its written permission. The move follows a Facebook trend of aggressively protecting the data of its more than 1 billion users,” Josh Constine at Techcrunch wrote.

Komarova says that displaying news from Facebook is not prohibited by the network. The new app is only an experimental product in prototype form and not yet available to consumers.