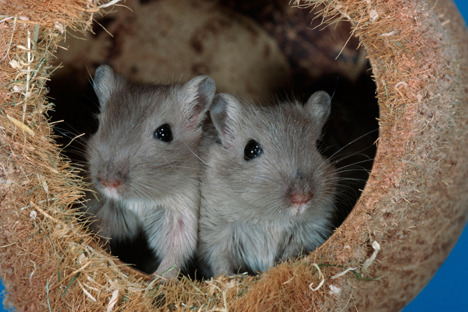 For the Mongolian gerbils this is the second space operation: they have already been out above the sky in 2007. Source: Alamy / Legion Media

On April 19 the Baikonur Cosmodrome launched the Bion-M1 satellite, with aboard linear mice, geckos, Mongolian gerbils and grape snails.

On April 19, the Baikonur Cosmodrome launched the Bion-M1 satellite – the first Russian spacecraft since 2007 intended for biological research involving animals. On board is an entire zoo, which is now orbiting around the Earth. The satellite is expected to return to Earth on May 18. We present a list of Bion's passengers.

Eight Mongolian gerbils (Meriones unguiculatus) will be in the heavens for one month. They were chosen as “astronauts” for their small mass (1.4–1.7 ounces each), as well as for their plain tastes in comparison with rats, which helped downsize the experimental setup.

It is this species of rodent's second venture into space: In 2007, gerbils orbited for two weeks on board the Photon-M3 satellite. Given that the lifespan of gerbils is around 2–2.5 years, a month's flight for them is like a few years in space for humans.

On board the Bion are 45 genetically pure, or “linear,” mice (Mus musculus), whose genome is being closely monitored. “They are black mice from the S57black/6 line – each mouse has its own genetic identity, and they are specially bred for molecular genetic research. We have never put these mice into space before. It is a new experiment,” said the deputy leader of the Bion project, Yevgeny Ilyin of the Institute of Biomedical Studies under the Russian Academy of Sciences.

He says that, during the flight, scientists will monitor the behavior of the mice with the help of special cameras to measure their pulse and blood pressure. After the flight, all their tissues and organs will be thoroughly examined. Furthermore, the study will include genetic alterations under the influence of weightlessness.

Only male gerbils and mice are part of the research.

Fifteen geckos (Chondrodactylus turneri) will keep the mice company on board the Bion. Like gerbils, geckos are space veterans – their congeners also flew on the Photon. “Geckos are not fastidious and make ideal objects of study,” said Ilyin.

Geckos have nano-fibers on their fingers, which allow them literally to stick to any surface, even glass. “We can use geckos to test the hypothesis about the role of removing the weight-bearing function of limbs in the development of adverse alterations,” said the project’s deputy leader.

Cichlid fish (Oreochromis mosambicus) inside a special OmegaHab aquarium are the only foreign females on board the Bion. As part of an experiment prepared by a team of German scientists led by Dr. Reinhard Hilbig of the University of Hohenheim, an entire ecosystem has been blasted into orbit.

The OmegaHab-B1 aquarium contains aquatic plants (Ceratophyllum) and unicellular euglena algae, which will supply oxygen throughout the flight. The cichlids will feed on freshwater mollusks (Biomphalaria glabrata) and crustaceans (Hyalella azteca).

“These experiments are being carried out for the purpose of creating future biological life-support systems for space crews on missions lasting many years,” said Ilyin.

Also launched on board the Bion were two containers of grape snails (Helix pomatia Linnaeus). They are there for study of the responses of their gravity receptors (analogous to the vestibular apparatus in humans).

In addition, the researchers will study micro-organisms and investigate the tolerance of lichens and plant seeds to conditions in outer space.

Engineered at the Progress Space Center in Samara, the Bion-M1 satellite is based on design solutions already tried and tested in the Vostok series of spacecraft and the Zenith photo-reconnaissance satellites. From 1973 to 1996, eleven such units were launched. Pictures of these satellites clearly show the recognizable, ball-shaped, descent module. This is where living organisms and equipment are contained during their journey back to Earth.

The total mass of scientific equipment inside and outside the module is about 1,433 pounds; the whole apparatus, weighing 6.84 metric tons, was put into orbit from the Baikonur Cosmodrome by a Soyuz-2.1a rocket. Alongside Bion in orbit will be: the Aist satellite (designed by students of Samara Aerospace University); the Beesat-2, Beesat-3 and SOMP devices (developed at the Technical University of Berlin); and the U.S. DOV-2 satellite, whose mission is to fine-tune remote probing technologies.

The descent module is large enough (about 116 cubic feet) to house a life support system for all the “passengers” on board. The support system is needed to maintain the requisite concentration of oxygen, a temperature of around 75 degrees Fahrenheit, and a humidity of 40–70 percent. An equatorial time-schedule is in operation – 12 hours of day and 12 hours of night. During the flight, the larger animals will be monitored with video cameras, including infra-red devices.