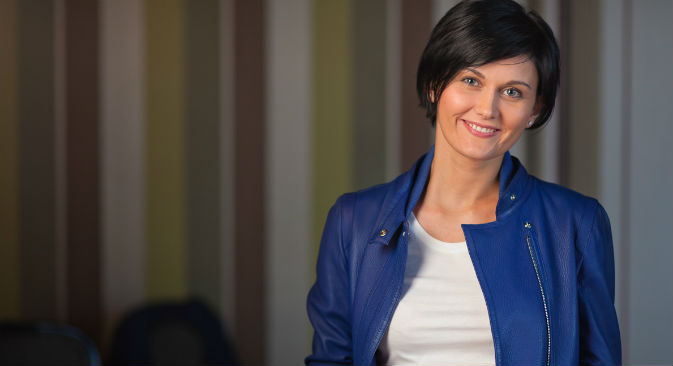 Alisa Chumachenko: "Our games are ad-free, and we are not planning to change this anytime soon." Source: Game Insight

Alisa Chumachenko, founder and CEO of Game Insight, talks about the Russian and American gamers and the latest trends in the gaming industry.

Alisa Chumachenko, founder and CEO of Game Insight, a developer and publisher of top-rated free-to-play games for mobile and social platforms, speaks about the difference between Russian and American gamers, where game ideas come from, and the latest trends in the gaming industry.

Within the last year, Game Insight has opened an office in San Francisco, reached sales of $90 million and made the Forbes' list of top 30 most successful Russian web companies. The company develops free apps for iOs, Android, Facebook and VKontakte.

Though Alisa Chumachenko graduated from GITIS (Russia's leading theatre school), by the middle of 2000, she and a group of her friends were beginning to develop their own video games. In 2010, she founded Game Insight.

Russia Beyond The Headlines: You opened an office in San Francisco a year ago. What does it do?

It’s very important for us to have our own hub at the epicentre of the tech industry in Silicon Valley - to have our finger on the pulse of technology. We also have representatives in Japan, Korea, and South America. These are not fully-fledged offices, but rather a network of representatives that help us better understand those fast-growing markets.

A.C.: Almost all Game Insight employees are gaming enthusiasts; the combined experience of our team allows us to look forward and understand what kind of games will be in demand six months, one year, or even two years from now.

This is a very intuitive but also a very rational, statistics-, and analysis-based process. We have an ongoing wish list of games we would like to bring to life.

RBTH: What are the differences between users in various countries?

A.C.: If we compare Russian and American gamers, Russians are more emotional and spontaneous. This is true for their spending habits as well. On the other hand, Americans usually plan their spending. Still, Americans account for the bulk of our sales.

Europeans are harder to define - they are all different. And perhaps counterintuitively, it’s the Japanese who spend the most on in-app purchases.

RBTH: Your apps are free. How do you make money on them?

A.C.: We believe that freemium (free-to-play) is the best way to monetize. Players can play for free, but they can also purchase in-app items and currency. This model is sufficiently popular already, and will only become more so.

RBTH: Do you use built-in ads?

A.C.: I believe that if a company knows how to make money from its games, it makes no sense to spoil the user experience by inserting intrusive ads. Our games are ad-free, and we are not planning to change this anytime soon.

That said, for many developers, integrating ads into their apps may be their only source of revenue.

RBTH: What can developers do to make their apps stand out among dozens of similar software products?

A.C.: Quality comes first. I wouldn’t advise young developers to rush out and create something that’s innovative rather than polished and well-designed – in most cases it is doomed to fail.

RBTH: What changes can we expect in the gaming market in 2013?

A.C.: First of all, you can expect to see more cross-platform mobile games and an increase in popularity of “mid-core” and “hardcore” games, which has a lot to do with the increasing migration of players from PCs and consoles to mobile devices.

Facebook has been growing more popular as a gaming platform, too. Facebook has a strong mobile strategy, and we are about to see active steps on their part that will definitely have an impact on the mobile gaming industry as well.