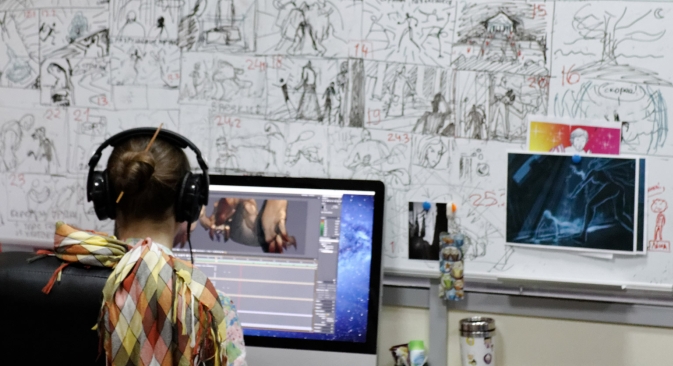 One of NARR8 formats is motion comics. Source: Kirill Rudenko

Following its successful launch in Russia and English speaking countries at the end of 2012, the NARR8 app for iPads and Android devices has now hit the Korean market.

NARR8 Managing Director, Maxim Matveyko, discusses why Korea was chosen to be the starting point for the app's Asian campaign, and what the Korean market has been like so far for the Russian startup.

Russia Beyond The Headlines:How did the idea of NARR8 come about?

Maxim Matveyko: There are three founders: Alexander Vashchenko, Igor Matsanyuk and Alisa Chumachenko. Before they took up NARR8, they had another successful project – Astrum Online Entertainment, an IT holding that was later acquired by Mail.ru (one of the Russia's largest Internet company).

Their success with online games prompted them to look for ways to broaden their horizons, and they decided to go with interactive books and interactive content for mobile devices.

One might say we were nurtured by a startup incubator run by the Farminers venture company. The incubator supported an enormous number of projects that seemed crazy at first glance. For instance, there was a project for new Internet. Many ideas did not really fit the Farminers format, but their authors were so excited about creating unusual content that we invited them to set up studios for NARR8.

For instance, take the team that is now making the Chronographics series. They initially arrived with an idea dubbed Your iPad Clock – an app that was supposed to not only show the time, but also provide information about what happened that day in, say, 1825 and even what could happen after 2013.

As a result, the guys made a wonderful history series. They have already issued several episodes: The Gutenberg Revolution (about the history of printing) and Cortes and the Conquest of Mexico (the story of the conquistadors).

RBTH: What formats does NARR8 work in?

M.M.: One of our formats is motion comics. We were actually the first to make it into a series. It combines the use of comics and animation graphics and elements – special effects, 3D graphics – to emphasize movement.

The second format is interactive books (large texts featuring background images). If several pages are dedicated to a story about a race car, the authors will add an animated image of a car as well as the noise and background effects.

The third format that took shape as we worked on the Chronographics series is popular science. It is difficult to get people interested in a static text, so here we create reader interaction with content. We are planning to popularize mathematics, chemistry, physics to capture the attention of kids who don't enjoy those subjects at school.

RBTH: What styles do you work in?

M.M.:Final Fit is a Marvel-type comics series which involves highly detailed painting, fairly accurate anatomical representation, and many elements. This is the style they use in the United States and Europe.

Cats is a project in the furry art style which features anthropomorphic animals. The style was actually created by a Japanese artist. The artist that works for us is very popular in the furry community, especially in the U.S.

We also have Jam which is a European-style manga comic. The painters in our studio love Japanese manga and are aware of its canon, but they have a different approach to drawing it. They do a lot of stuff on paper first, while other studios draw everything digitally.

Creating comics is a very time consuming process: some only outline the silhouettes of the main characters, while others paint them, and draw or fill in the background.

RBTH: NARR8 is a classic example of a startup. How did you solve the problem of financing? What monetization model do you use?

M.M.: Every startup's primary task is to win over an audience, which I believe we have done now with some 700,000 users of our application. We are already starting to charge fees for some content.

We have introduced a virtual currency, and any user who opens the app every day gets it for free. We are now working on pricing, trying to make the fees not too high for our users. Top-level digital comics cost approximately the same as paper comics: $3-5 each.

RBTH: What countries and regions are you represented in? Have you established a name in these countries?

M.M.:We are working in four languages: Russian, English, Spanish and Korean. We knew we had been getting extensive media coverage in Western countries, but when I came to Korea I was surprised to find so many publications about us.

RBTH: How does your business work in Korea?

M.M.: As far as marketing is concerned, we do everything on our own. We have established contacts with local stores, and we are planning to reach out to T-store and Samsung Galaxy soon. But we have hired a local agency for public relations. And so far it has proved to be the best agency we have used anywhere.

My advice to those who want to expand to Asia, but are being cautious: start with Korea.

RBTH: What difficulties did you encounter when launching an app on the Korean market?

M.M.: We had translation difficulties: we did not have a literary style at the beginning, but once we hired Korean team we gradually improved, although there are still things to work on. In our estimation, we are a newsmaker, we only have show times for tablets. We usually make 11 episodes in two weeks, so translations have to be done on a pretty tight schedule.

RBTH: What are your development plans for the near future?

M.M.: The global trend toward larger screens is actually playing into our hands. We are now producing content for tablets only, but we are redesigning it to fit smaller screens.

We are also planning to move to web and smart TV very soon. The move will broaden our horizons, with 4.5 billion computer users all over the world. Mobile device users understand that high quality content comes at a cost, and although the proportion of such people is much smaller among Internet users, the audience itself is several times greater.

Our main plan is to build a publishing business. We are now creating the content that will set the bar, but our next step will be to give third parties an opportunity to create their products based on our technology.

Kakao-talk, a Korean messenger, has already launched a service which can store images, content, animations, etc. and sell it at the price you set. We are on track to create a content editor that will allow users to create their own interactive books, comics and earn some money on them, while we will be making money on our technology.

RBTH: Do you have plans to expand to other Asian countries like China, Japan and India?

M.M.:We certainly do, although we are already available in India in English on iOS and Android platforms. To reach out to the Chinese audience, we will work through a partner, but only after the monetization model proves viable. That is, once we have a business. And we will certainly venture on to the Japanese market, but have to study it first and set our priorities.