Russian scientists to continue use animals to explore space 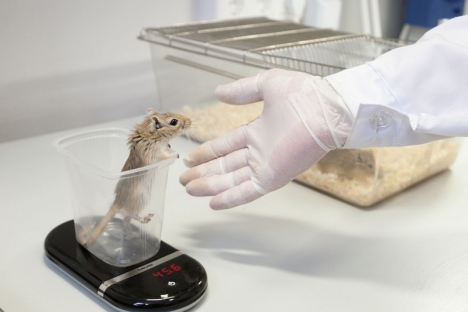 The most promising area of live organism research is small animals, such as mice, According to Russia's scientists. Source: www.spaceflight101.com / Oleg Voloshin

Following the experiments on mice and gerbils that were sent to space on the Bion-M bio-satellite in April, the Russian scientists are still planning to launch more space flights with living organisms to find out how space factors will affect animals.

Following the experiments on mice and gerbils that were sent to space on the Bion-M satellite in April, the Russian scientists plan to launch more space flights with living organisms to find out how space factors will affect animals.

The Federal Space Agency Roscosmos has set up an ad-hoc commission to find the reasons of the death of mice and gerbils aboard the Bion-M bio-satellite, Deputy Director for Science of the Institute of Medical and Biological Problems and Bion Project supervisor Vladimir Sychev told a press conference in Moscow.

"Unfortunately, one of our blocks ran out of order and 15 mice died. The gerbil block of the Kontur system failed, too. A special commission of Roscosmos will find out why that happened," Sychev said.

He said the fish contributed to the experiment by Germany also died.

"Lights went out 12 days [after the satellite was launched], algae stopped being synthesized and the fish died," he said, adding that it was a German experiment assisted by Russia.

He said the deaths were expected because of the high strain and conflict potential. Male mice sent on the space mission are more aggressive than female mice, he said. Besides, space flight conditions were harsh for living organisms.

"A space flight is not a vacation," Sychev said.

Forty-five mice were loaded into the Bion capsule and the researchers hoped at least half of them would survive. The minimal number of mice required by the experiment was 15. As a result, 16 mice survived the flight and one container with 15 mice broke down.

"We have no such plans and, frankly, we have no such need either because we have studied everything we could on large animals," he said.

"There is no need for a dog or a monkey. Whatever we test on them, we can test on humans also," he said.

The most promising area of live organism research is small animals, such as mice, because they can become subjects of cell, gene and molecular experiments.

"Mice have genetic similarities and their genes coincide 98 percent with human [genes]. In fact, our experiments on mice mean experiments on humans," Ilyin said.

Russian scientists would like to experiment on mice in an orbit halfway to the Moon, he added.

"We are insisting on the construction of a spacecraft, which will be positioned in a high-apogee orbit of 200,000 kilometers and return to the Earth upon the end of the mission," Ilyin said.

Same as the International Space Station and Bion and Foton bio-satellites, the new vehicle will help study the influence of space factors on living organisms.

"If the experiment is approved, we will be using protozoa, infusorians, although we are dreaming about experiments on mice," Ilyin said.

It will take from three to five years to design the vehicle if Roscosmos backs up the project, the scientist said.