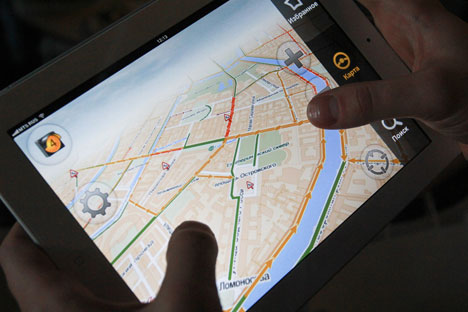 The Russian company has been added to Safari’s list of search engines alongside Google, Bing and Yahoo.

The latest version of Apple’s mobile operating system, iOS 7, launched this week at the Apple Worldwide Developers Conference 2013 (WWDC 2013), is currently only available to developers, while ordinary users won’t be able to install it until autumn.

Developers from Russia, Ukraine and Turkey have made their own contribution to the ongoing discussion around the advantages and disadvantages of the new operating system, which Apple CEO Tim Cook called “the biggest change in the entire history of the iPhone.”

Among the new features, they have discovered that iOS 7 has added the Russian search engine Yandex to its Safari search options, which include Google, Bing and Yahoo.

Yandex confirmed the information, but declined to make any further comment. The financial aspects of Yandex’s arrangements with Apple have not been disclosed.

According to sources quoted by the Russian newspaper Kommersant, the Russian company may have paid Apple “between several million and several tens of millions of dollars” to be included in the list of search engines in Safari.

“It depends on a number of parameters: whether the price is fixed or tied to the number of search queries, how long the agreement is for, etcetera” one source said.

For example, it was revealed in February that Google would pay Apple $1 billion in 2014 to maintain its status as the default search engine in iOS. In contrast, in 2009 Google paid just $82 million for the same right.

Thanks to the integration between Apple’s own maps system and the mobile version of Yandex Maps, any search on Apple’s maps done in Russia is now powered by Yandex.

At the end of 2011 Yandex strengthened strategic cooperation in Russia and the CIS countries with another key company – South Korea’s Samsung.

The two companies agreed to add the Yandex search engine to the default choices offered for Samsung smartphones operating on the Bada platform.

Only a few local operators in the whole world have succeeded in granting themselves a spot on the iOS list of search engines (Baidu in China is one of them).

Dmitry Martynov, program manager at visualization technology company Parallels, believes that making Yandex the local search engine at the discretion of the users was an obvious step for Apple after it integrated its maps – and this was only a question of time.

The inclusion of Yandex in iOS 7 is unlikely to have a major influence on its market share and financial performance, according to Uralsib analyst Konstantin Belov.

It is still not the main search engine, and the market share for Apple devices in Russia is not big, especially compared with Android.

But Yandex needs to prepare for users crossing over to mobile devices, and therefore it is important to have a presence on all mobile platforms.

LiveInternet founder German Klimenko believes that the agreement between Apple and Yandex is more significant in terms of image than usefulness.

Owners of iPhones and iPads do far less internet searching than computer users. He says that it would be more practical for Yandex if its search engine could be installed by default for Russian users in the conventionally used Firefox (which occupies third place in the Russian browser market after Chrome and Opera with a share of 18%, according to LiveInternet data for May).

Yandex is the biggest search engine in Russia. According to LiveInternet, its share of search engine queries on the Russian internet in May was 61.5 percent, against Google’s 26.2 percent and Mail.ru’s 8.7 percent.

Yandex needs to make a big effort not to lose its position in the market, since more and more mobile devices are using the Android operating system, where Google’s services are the default choice.

According to LiveInternet, 15.4 percent of all users accessed the Russian internet from devices operating on Android in May - a year-on-year increase of almost 250 percent.

Meanwhile, iOS (iPhones and iPads) had a share of just 8.5 percent (although this is a two-fold increase). In May 2013, Safari’s share in terms of Russian users was 16 percent.

Based on material from Kommersant and Vedomosti.