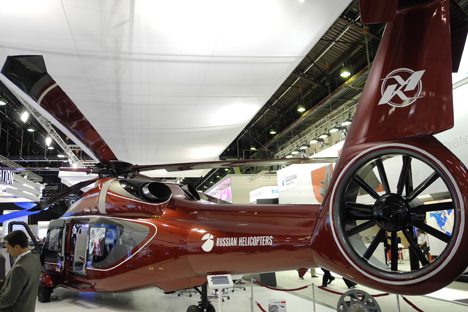 The 2013 Paris Air Show in Le Bourget resulted in new, large orders for Russian makers of both military and civil aircraft.

The Sukhoi Superjet 100 found new consumers in Asia and the Middle East, and contracts for deliveries of the Night Hunter and Alligator helicopters were also signed. The performance of the latter caused a minor scandal, though.

On the first day of the air show, Russia signed an export contract for the delivery of the Mi-28N Night Hunter helicopter, Rosoboronexport deputy director Alexander Mikheev told a news conference.

The Mi-28N is a multi-purpose military helicopter. More than 50 Mi-28 helicopters have been delivered to the Russian military as attack helicopters.

However, he did not reveal who the contract – the first for Night Hunter in Le Bourget – had been signed with and for how many helicopters. It was previously been reported that Iraq had ordered 40 Night Hunter helicopters from Russia.

Rosoboronexport also plans to sign export contracts for supplies of the Su-35, ultra-maneuverable, multi-role fighter and the Yak-130 trainer aircraft, as well as the Ka-52 Alligator reconnaissance attack helicopter.

These machines have, so far, been produced exclusively for the Russian air force; however, Rosoboronexport has plans to begin export supplies. According to Rosoboronexport delegation head Sergei Kornev, talks are currently under way over the three models with potential customers.

A short while ago, Mikheev said that the first contract for deliveries of the Ka-52 helicopters had been signed. He did not mention the amount of the contract or the country that had signed the contract.

A source in the Russian delegation said the “contract was signed with Iraq as part of the 2012 agreement,” RIA Novosti reported.

The source added that it was the first contract in the framework of a major agreement between Russia and Iraq on the acquisition of Russian-made arms and military equipment.

“Therefore, the agreement, which is worth more than $4 billion, has officially come into effect,” the source said.

Incidentally, the new Ka-52 performed its first display flight in Paris, although its prime-time flight was canceled; two Eurocopter Tiger helicopters performed instead.

The organizers attributed the change in schedule to the fact that the French prime minister was present at the air show at that time; however, the source argued that, had the Tiger helicopters performed after the Ka-52, they would have failed to draw as much attention.

The Su-35S is equipped with the latest SINS-SP2 strapdown inertial navigation system, which is capable of autonomously identifying the location of the aircraft when there is no satellite navigation or communication with ground services.

The first contracts for supplies of civil aircraft have been signed as well. Ilyushin Finance Co. (IFC) leasing company and Sukhoi Civil Aircraft signed a framework agreement on supplies of 20 Russian-made Sukhoi Superjet 100 aircraft. The aircraft will be produced for foreign customers.

Of these 20 planes, fifteen base models will be leased to airlines in Southeast Asia and the Middle East, and five new modifications with an increased range will be offered to potential foreign buyers. The aircraft will be delivered starting in 2015. The buyers are not reported.

The supplies will be financed as part of the program of state guarantees. The Russian government offers these guarantees to banks that provide loans to the buyers of Russian products.

So far, sixteen SSJ 100 aircraft have been delivered to customers. The planes are operated by Russia’s Aeroflot and Yakutia Airlines, Indonesia’s Sky Aviation and Laos’ Lao Central. The portfolio includes 179 firm orders, a spokesman for Sukhoi Civil Aircraft said.

On June 18, the first SSJ 100 aircraft will be handed over to Mexico’s Interjet in Le Bourget. The carrier has ordered 20 aircraft, with an option for 10 more planes.

The first day of the air show also saw Rosoboronexport sign a contract with the U.S. Army for the delivery of 30 Russian Mi-17 helicopters to Afghanistan, as part of joint efforts to combat terrorism, the Russian company said in a statement.

The amount of the contract was not officially reported; however, with reference to organizations connected with arms exports, Interfax said that the new contract for the delivery of 30 Mi-17V5 helicopters to Afghanistan is worth more than $500 million.

“It is one of the largest arms contracts signed with the United States in the last several decades,” the source said.

This is not the first agreement of its kind. In May 2011, Rosoboronexport and the U.S. Department of Defense contracted deliveries of 21 Mi-17V5 military transport helicopters (worth a total of $367.5 million) to Afghanistan.

However, the total value of the contract, including spare parts and maintenance, amounted to about $900 million.

The Pentagon is buying the Mi-17V5 as part of the second phase of the “helicopter package” launched in April 2013, following a meeting of the Russia-NATO Council.

It had previously been reported that the 10 RNC countries involved in the project had contributed more than $20 million to train Afghan technical specialists, provide technical documents and purchase spare parts to maintain the Afghan Mi-17 fleet.

On the first day of the air show, Austria’s Diamond Aircraft Industries and the Ural Civil Aviation Plant signed an agreement on the joint development and production of a series of light, multi-role aircraft capable of carrying up to 19 passengers and having a range of 250–620 miles.

New billion-dollar contracts for the Russian aviation industry should be expected in the next few days of the air show. The organizers hope to beat the 2011 record, when more than $100 billion worth of contracts were signed. This year, many of them will be signed by Russian producers.