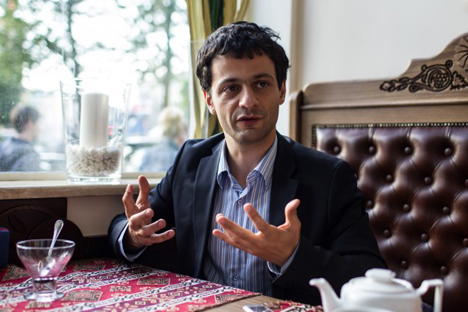 Artem Oganov: 'Don’t be misled into thinking that everyone is welcome in the West – the Western system of science is very tough'. Source: Sergey Savostianov / RG

Artem Oganov, a professor at SUNY’s Stony Brook University, is opening a laboratory at the Moscow Institute of Physics and Technology through Russia’s Megagrant program. He recently sat down with Rossiyskaya Gazeta to discuss the differences between Russian and American science, as well as the problems Russian science has faced since the end of the Soviet Union.

Artem Oganov, an expert in crystallography and a professor in the Departments of Geosciences and Physics and Astronomy at the State University of New York at Stony Brook, will open a laboratory at the Moscow Institute of Physics and Technology through Russia’s Megagrant program.

A graduate of the Geology faculty of Moscow State University, he has worked at universities in Italy, Switzerland, France, China and Hong Kong.

Oganov spoke with Yury Medvedev of Rossiyskaya Gazeta about the differences between Russian and American science and the problems Russian science has had since the end of the Soviet Union.

On the Megagrant program

A Megagrant is a unique opportunity to offer help to Russian science at this most difficult moment. It has a personal value for me, too, as it will allow me to create a unique research team in Russia.

Megagrants are awarded by the government of the Russian Federation for the purpose of attracting world-class scientists to do scientific research at Russian universities, research institutes and centers. Each grant is worth up to 150 million rubles ($4.5 million).

Multimillion-dollar grants abroad and in Russia mean different things. In the U.S., I received over $10 million in grants, but I can do much less with this money there than [I can] with $3 million in Russia.

There are certain reasons for this. My American university gets about 40 percent of the grant, about half of the remaining sum covers the salaries and insurance of the employees.

Besides – and this is a point of principle – the Moscow Institute of Physics and Technology offers my team an almost unlimited access to a supercomputer, which by far exceeds the equipment I have in the U.S.

On academic science and the Russian Academy of Sciences

I’m far from believing that academic institutions are no longer relevant. Even in the U.S., science does exist in academic forms, for example, the national laboratories.

In France and Germany, there are institutions similar to the Russian Academy of Sciences [R.A.S.], where scientific research is much more efficient than in universities.

At the same time it is obvious for many that the R.A.S. is not functioning well. For example, if you ask somebody in the West the names of Russian academics, some 10 percent will be mentioned, while the remaining 90 percent are absolutely unknown to world science.

On working in the west

Don’t be misled into thinking that everyone is welcome in the West – the Western system of science is very tough. For instance, the assistant professor position is granted for six years. Through all of these years, the person is under huge pressure, not knowing if he or she will be offered a permanent position in the end.

Russian Minister for Education and Science Dmitry Livanov has said that academic science such as is practiced at the Russian Academy of Sciences is no longer relevant and that scientific research should instead be based at universities. In supporting his claims, he often cites the example of the United States.

If not, they’ll be discarded and unemployed. That’s why young scientists have to get along with everyone, slave away, get funding for the university through grants, from which the university then takes a percentage. If you don’t do this, you’ll be sacked, so you have to fight for your place in the sun.

This, by the way, gives Russian science a chance. If competitive and – and, more importantly, stable – conditions become available in Russia, prominent world scientists might come here. In this respect, it is interesting to look at China’s experience, which managed to attract some very influential scientists from around the world.

On the American system of science

I think it’s far from optimal, in particular because it turns professors into managers and bureaucrats. Of course, a professor selects Ph.D. students and postdocs and gets them to research a topic, discusses the findings with them, but he hardly does any scientific research anymore.

It works like this. We create new material, basing our research on the fundamental laws of physics. We basically calculate it from a chemical formula of a material substance by predicting what kind of crystal structures could be obtained from it.

More about Science in Russia

Say, we need to create the hardest, the densest or the lightest material. We don’t go to the laboratory, we don’t hold any experiments, but we get to the supercomputer and basically calculate how such material can be obtained.

On accusations of alchemy

This is the sort of response we once got from the experts of the Nature magazine, when we submitted an article predicting that under certain conditions sodium can become a transparent red non-metal.

The editorial group said: “This is a crazy suggestion, we can’t publish it.” In a few weeks, an experiment conducted on our hypothesis obtained sodium of exactly such a type. Eventually, our article was published and I can’t describe how happy I was.

A young talented scientist is coming soon from Chelyabinsk, but overall I’m surprised by the lack of interest. And now, when I called for postdoc selection I expected it to be a big competition. Nothing of the kind.

Peter Agre on his Nobel Prize discovery and science in Russia

There is very little interest in Russia, but there are applications from China and Italy. Although I didn’t advertise the opportunity there, people learned about it somehow and expressed their interest. Finally, I did take on two Chinese and an Italian colleague, and managed to find a few good students from Russia and Ukraine.

In fact, human resources are a great problem for Russian science. I have an impression that young scientists have no will anymore. They want to get paid with minimum effort and little interest in science. This is my greatest disappointment.