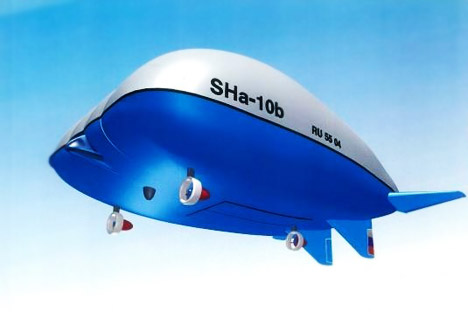 Cargo airships of special design are planned for use in delivering various freights across Russia. The speed of these airborne vehicles can reach 280 miles per hour, and they can easily cover the distance between the Baltic Sea and the Pacific. These properties could help a few Russian regions overcome their isolation.

An airship assembly project in Omsk Region is scheduled to be considered at the upcoming meeting of the Military and Industrial Committee of the Russian government.

The project leaders are sure that Omsk holds everything necessary for a unique manufacturing site. Airborne vehicles and engines are manufactured there, as well as polymers, rubber and avionics. Above all, there are human resources in Omsk that are capable of bringing to life a new generation of cargo airship.

A couple of decades ago, when airship construction was high on the agenda in Russia, the state design bureau “Krylo” (“Wing”) was set up in Omsk to construct such vehicles. Hundreds of inventors, engineers and developers put their heads together to make the project happen.

The authorities allocated funds to finance the creation of a test model of the first Russian cargo airship, but a crisis impeded the project realization. The bureau was disbanded, but the work was carried on, and Omsk engineers managed to get over 200 patents for the airship key assembly units and elements. Now experts are ready to join the project.

American engineers have tested the unique Aeroscraft airship. It cost the U.S. Department of Defense $35 million, but the Pentagon says this investment will pay off a great deal. The 230-foot-long vehicle can lift 66 tons of cargo, while consuming three times less fuel than the most energy-efficient airplane.

“We have changed the cigar-shaped form of the vehicle and have worked out brand new systems of aerostatic lift and anti-icing regulation,” says Vyachslav Shalaev, director of the SibADI (Siberian State Automotive-Road Academy) innovation center.

The airframe and the shell of the airship are manufactured from carbon fiber and modern materials. Hydrogen has been replaced by an incombustible gas. A ballast-less system, modern power units, navigation controls and superior rocket technologies make this vehicle basically new.

These airships—essentially modern zeppelins—can perform long-haul flights from Kaliningrad to the Kuril Islands at various altitudes, at a speed of up to 280 miles per hour, in any weather, with any wind power, and all year round.

Siberian inventors have recently made a new important discovery:  an innovative system for the airship’s aerostatic lift regulation, so far unrivaled in the world. However, funding is needed to assemble a life-sized test model and put it to the test at a special polygon.

According to economists, a mass-airship-production set-up would cost over $2.6 billion. Investors would struggle to launch such a project without state support, but it is worth a try. Zeppelins could not only compete with traditional transport means, but they could also make a separate industry of Russian machine manufacturing, given that this niche is relatively empty globally.

“The state puts its stakes on the regional development in Siberia, the Far East and the extreme North. The cost of constructing roads, bridges, tunnels, airports and railway stations there are too high to take on,” says Shalaev. “A modern airship doesn’t need them. It can deliver the freight to geologists, drillers, loggers and builders, right from the factories to the destination—be it in the wildwood, in the marshland, or in the permanent frost areas.”

Omsk engineers have developed a line of such vehicles. They claim that modern airships can ensure the fast and secure transport of people and goods to hard-to-reach or distant areas of the country and the world. In addition, these zeppelins can be used for rescue operations, fire extinction and state border protection.