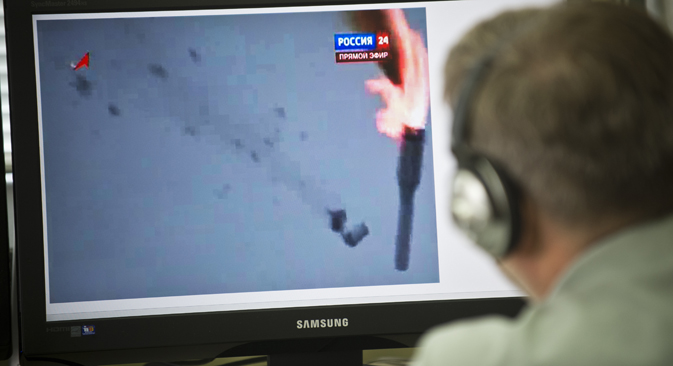 Kazakhstan expresses concerns over the environmental impact of the blast, which cost $200 million to the Russian space industry.

A Proton-M launch vehicle carrying three Glonass-M satellites unexpectedly changed its flight direction some ten seconds after takeoff, started to fall and exploded over a Russian cosmodrome in Kazakhstan.

The launch operation was broadcast live on the Russian Federal Space Agency's website.

No casualties have been reported as yet in crash and consequent explosion at the Baikonur space center.

"The first analysis of telemetry data and video footage capturing the first few seconds of the Proton-M launch vehicle's flight allows us to presume that one of the control engines malfunctioned. Meanwhile, the propulsion engines of the rocket's first stage continued to operate until it fell down. Apparently, the systems detected a malfunction but did not switch off the propulsion engines in order to move the rocket farther from the launch site," a source at the Baikonur space center said.

The rocket crash reportedly caused a crater of 150-200 meters in diameter.

Specialists were urgently evacuated from Launch Pads No. 254 and No. 2 of the cosmodrome.

"A toxic cloud generated by rocket fuel components has appeared over the crash site. It is moving to the east. This circumstance prompted a personnel evacuation from the launch pads located along the movement route of the cloud," Kazakh Emergency Situations Minister Vladimir Bozhko said at a government session in Astana.

"The rocket was carrying a total of 172 tonnes of heptyl plus the oxidizer."

He added that Russian specialists have already set up three chemical protection stations on the premises of the Baikonur Cosmodrome.

"There is a need to increase environmental monitoring around the cosmodrome and track down any possible traces of the recent explosion," Bozhko concluded.

The concentration of fuel components in the air and the soil is currently being measured.

The Russian Federal Space Agency has formed a commission to investigate the Proton-M crash.

A space rocket industry source put the damage caused by the crash of the Proton-M launch vehicle and the three Glonass-M satellites it was carrying at $200 million.

"Payload launch services by a Proton-M rocket are valued at from $80 million to $100 million. The satellites themselves cost approximately the same," he said.

The Proton-M was supposed to put into orbit three Glonass-M satellites to enlarge the navigation satellite cluster for the first time since 2011. It was the fifth Proton launch in 2013, and the 388th since this rocket entered service.

The Khrunichev Space Research and Production Center is the developer and producer of the Proton heavy launch vehicles.

A space rocket industry source observed that the launch of a multirole laboratory module (MLM) for the International Space Station (ISS) could be rescheduled until next year following this crash.

"The MLM is supposed to be launched with the help of a Proton rocket at the end of the year. But it is unclear how long it will take the investigative commission to establish the cause of the accident and give the go-ahead to further launches, as well as whether the Khrunichev Center will be able to make up for delays in commercial launches. Otherwise, it could face fines. An MLM launch date will depend on all of these factors, including naturally a decision of Roscosmos [the Russian Federal Space Agency]. I do not rule out that its launch could be postponed until next year, " he said.