Education
Roman Vorobyov
based on Interfax 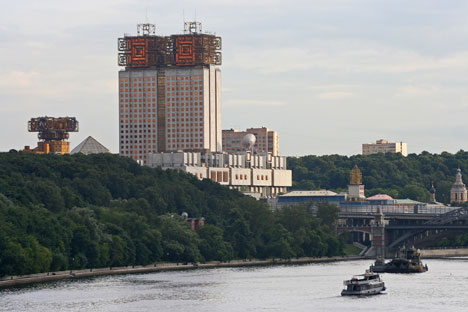 The Academy of Science is traditionally referred to by Muscovites as the 'building with a brain' because of its peculiar roof. Source: ITAR-TASS

Scientists and academics take to the streets in support of a new bill that would reform the institution.

The reform of the Russian Academy of Sciences has gained a parliamentary majority. Vladimir Vasilyev, faction head of United Russia, announced that “the United Russia faction presidium has decided to support this bill in the first reading."

The bill proposes handing control over the academy’s vast assets and 434 scholarly institutes to a new state agency. Under this bill, the academy would also be merged with two other state academies, for agriculture and medicine.

Young and ambitious scientists lack opportunity to work in the Russian Academy of Sciences, where the average of academicians exceeds 74 years, Russian Deputy Prime Minister, Olga Golodets said. According to the official data, around 2,000 young scientists leave Russia every year in order to conduct research at foreign institutes.

"Today our youth is alienated from the system of the Academy of Sciences because over a half of researchers are of retirement age or older. As of yet, there is no place for younger scholars, even if they do come up with ambitious projects," Golodets said.

“Institutes, and the Academy as a whole, should be reformed carefully," Putin offered warning to Academy President Vladimir Fortov. “The reform must be accurate, smooth and evolved so as not to make the mistake of replacing experienced and industrious people with specialists who talk and walk quickly but still have to learn how to govern a whole industry," Putin said.

Putin also called to Fortov’s attention that the reform asks for “the establishment of an agency managing Academy assets and essentially performing one of its main functions - the appointment of academic institute directors and, to a considerable degree, the evaluation of their performance."

“Probably, those who think that bureaucrats should not have these powers are right," the president said. Instead, Putin proposed setting up a special group of authoritative scientists at the Presidential Education and Science Council to make such appointments.