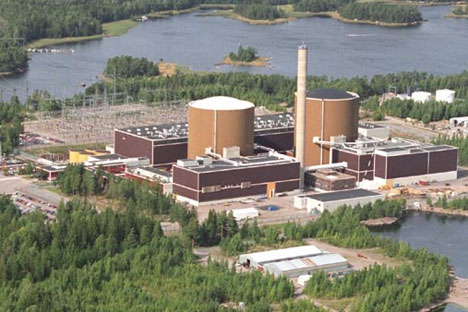 Loviisa Nuclear Power Plant (Finland) has benn working successfully for 30 years already and considers to be the most safety plant in the world. Source: wikipedia

Interest in Russia’s peaceful nuclear technology is growing in Europe. In its era, the Soviet Union built nuclear power plants in Bulgaria, Hungary, Czechoslovakia, Finland and Germany. Currently, Finnish and Czech preferences for the ultra-safe nuclear technology being produced by Rosatom could bring other European countries around to choosing Russian-made nuclear power plants.

In the post-Soviet era, the Russian corporation Rosatom has not abandoned its efforts to continue operating in the European Union, and those efforts have finally started to pay off. For example, the Czech Republic has switched from American nuclear fuel assemblies to Russian-made ones, due to the latter’s reliability and safety.

Rosatom Overseas also signed an agreement with the Finnish company Fennovoima this summer, to develop a draft contract to build the Hanhikivi 1 Nuclear Power Plant in Finland. The Russian company intends to obtain a 34-percent equity stake in Fennovoima. If the partners agree on all aspects of the deal, the project will be a breakthrough for modern Europe.

Many independent experts have ranked the Loviisa Nuclear Power Plant in Finland among Europe’s best, in terms of both economic efficiency and safety—and two of its units were built to Soviet designs. Finland’s nuclear supervision authority, STUK, is considered to be one of the world’s toughest, making Finnish specialists’ choice of Russian technology all the more respectable.

Nuclear generation accounts for around 25 percent of Finland’s total power output, which is even more than in Russia, where nuclear plants generate more than 16 percent of power. The Finns were the first in Europe to announce that Rosatom offers the world’s best nuclear energy solutions for peaceful purposes.

The Czech Republic could become the next nation to choose modern Russian nuclear power designs: A Czech-Russian consortium offering the AES-2006 project is in the bid for the construction of two power units at the Temelin Nuclear Power Plant.

Russia is building six power units of this design at home, in addition to two in Belarus and four in Turkey. The AES-2006 is a generation 3+ power plant, meeting all post-Fukushima safety requirements and featuring a unique combination of active and passive safety systems. The project also meets all International Atomic Energy Agency (IAEA) and EU parameters.

Specifically, the AES-2006 features a double containment designed to withstand a hit by aircraft weighing up to 400 tons; passive cooling systems for the active zone and the shielding container, combined with four-channel active systems; hydrogen afterburners; and a core catcher.

No other design in the world provides more safety measures. Had such a plant been subjected to the same kind of natural disasters as the Fukushima plant was hit with in March 2011, it would have withstood even such an extreme impact.

Stress tests run after the Japanese disaster have demonstrated the resilience of the Russian design to various cataclysms. The Rosatom-designed, advanced nuclear power plant is capable of stopping nuclear fission, dissipating residual heat, and ensuring safety all on its own—even if its power supply system and water stations are knocked out of action indefinitely.