Foreign leaders to land on helipads at the Kremlin 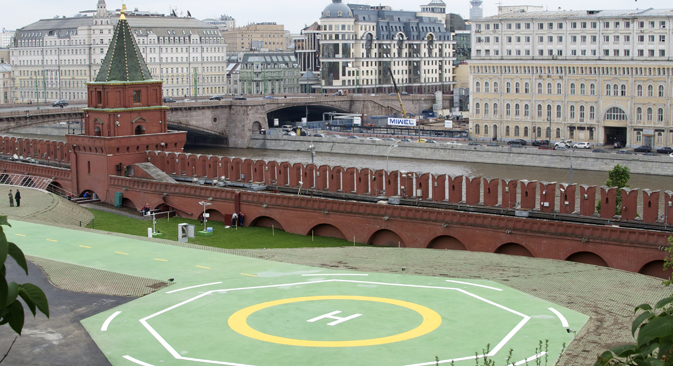 Helicopters will come in to land either from the direction of Zamoskvoretsky Bridge or from the side of Zaradye. Source: AP

Experts believe air transport throughout the city is a safer option for Russian and foreign officials.

Moscow will soon sprout helicopter landing pads. A ban is still in force on helicopter flights over Moscow, but the city’s transport development program through 2016 envisages increased use of air transport, which is impossible without lifting the ban.

Helipads will be built on the rooftops of buildings housing government ministries, with due account taken of the need to preserve historical buildings. The measure is aimed at providing the country’s leaders with greater mobility and the opportunity to travel by air.

A helipad for the head of state at the Kremlin is ready, and the Presidential Administrative Department expects that it will also be used for visiting foreign leaders.

Flights over the city were banned back in the Soviet period. The restriction — imposed “to protect vital state facilities for national security purposes — is still in force. An exception has been made for the Ministry for Emergencies, the ambulance service, police and top national leaders. To date, the entire area within the Moscow Ring Highway is a restricted zone.

Since May 2 of this year, however, commercial flights have been allowed over the city at an altitude of at least 26,500 feet.

The decision to use Moscow air space was prompted by traffic congestion in the capital. Some traffic jams are caused by leaders’ motorcades, for which roads are blocked for long periods. It was therefore decided to remove the officials’ limousines from the streets.

The all-weather, 44,800-square-foot Helicopter Pad 1, built on the grounds of the Moscow Kremlin near the wall bordering Tainitsky Garden, can handle helicopters of various classes. There is no parking space for a standby helicopter in the Kremlin.

To vacate space for the pad, makeshift summer structures built about 20 years ago for the Federal Protection Services were pulled down and a bank was built up. The control center is located in Petrovskaya Tower.

Helicopters will come in to land either from the direction of Zamoskvoretsky Bridge or from the side of Zaradye (the area formerly occupied by the Rossiya Hotel). The pad has room for two helicopters.

The Presidential Administrative Department assures that helicopter flights will do no harm to the Kremlin walls and the Kremlin. Nevertheless, to be on the safe side, meters to monitor possible impact on the walls have been installed in the towers.

The helipad is on state-protected territory, but the Culture Ministry has given the go-ahead for construction, said Viktor Khrekov, press secretary of the Presidential Administrative Department.

Earlier, UNESCO had expressed concern about construction work in the Kremlin, which is on its world cultural heritage list. The press secretary said that, if international organizations had any questions, they should discuss them with the relevant government ministry.

Head of the Presidential Administrative Department, Vladimir Kozhin, said that the flight from Vnukovo Airport to the Kremlin would take 5–7 minutes by helicopter, not counting take-off and landing.

The leaders of other countries visiting Russia will reach the center of Moscow in the same way. The Department notes that foreign heads of state visiting the Russian president at his Sochi residence often use Russian helicopters.

“This option is under consideration, but it all depends on protocol and the other countries’ rules,” Kozhin says. For example, the Chinese leader is not permitted to use helicopters during his foreign trips, for security reasons.

Security experts think that moving by air rather than over land would be safer for foreign guests and Russian leaders.

“The helicopters of our leaders have the latest radio-electronic, infra-red and optical equipment to neutralize any missile fired at the helicopter. In general, it is much more difficult to smuggle into Moscow and use shoulder-fired missiles than, for example, a grenade thrower, which could theoretically be used to hit the leaders’ motorcades,” says military expert Ilya Kramnik.

The head of the Presidential Administrative Department said that the project would cost 200 million rubles ($6.1 million).

The Ministry for Emergencies has a helipad on Vatutina Street, and a pad will soon be built on the roof of the Defense Ministry on Znamenka Street. Floating helipads developed by the Helicopter Industry Association may soon appear.

Under that project, seven movable landing stages are to be set up for air taxis and rescue helicopters. The first floating helipad is to be built on the Khimki Reservoir this year.

Business centers such as Crocus City and Victory Plaza have been building their own helipads. Moscow City, as a business area, will have two helipads.

The Moscow City transport development program through 2016 envisages development of air transport in the capital, as well as a joint project with the Transport Ministry to build a network of helipads — 10 within the city limits and 40 outside Moscow.

Based on materials from Izvestia, Kommersant, the Unified Ministry for Emergencies Editorial Office and RIA Novosti.