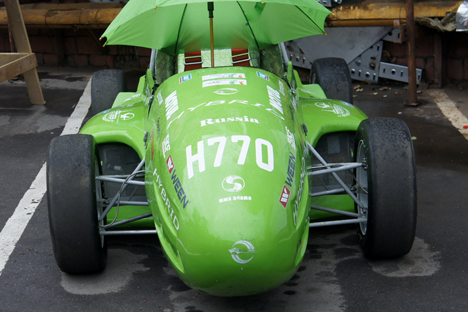 Eco-friendly cars are still not popular with Russians, due to their high price, the lack of charging stations and insufficient state support. RBTH attempts to find out if electric cars are needed at all in the capital city of a state with the world’s second largest oil industry.

According to the newspaper Kommersant, on July 22 the Russian postal monopoly Pochta Rossii turned down a contract with the auto group Renault to rent 12 electric cars. This contract, worth 15.9 million rubles ($490,700) was agreed upon prior to a recent change of leadership in the company, and it was later reviewed.

Whereas, at first, Pochta Rossii wanted to purchase 100 electric cars immediately to serve the Sochi Olympics, it became clear after company assessments that the cars would never pay for themselves.

Nevertheless, eco-friendly cars are growing in popularity in Russia — albeit at a far from impressive rate. The first electric car rally took place in Moscow on July 14, and 20 electric cars took part.

The cars, which were powered by electricity instead of gasoline, traveled from the Krasniy Oktyabr center — popular with Moscow’s sophisticated party goers on Bersenev Embankment — to Gorchakova Park in an area southwest of Moscow that recently was incorporated into the city.

Vasiliy Panavits, a representative of one of the organizers of the Ekomotors rally, says his company has been trying to promote the idea of using electric transportation in Russia for the past five years.

In his opinion, the main issue has been the lack of support from the state: “Let’s say the television tells us we will all travel in electric cars, that we can sit behind the wheel of one of these cars ourselves. The tax needs to come off too, and the prices will come down by 30-40 percent, straight away.”

The rally in Moscow featured cars such as the Estrima Biro, Mitsubishi i-MiEV, Nissan Leaf and Chevrolet Volt, among others. Spectators could observe how the cars were charged up before the start of the rally, sit behind the wheel and talk to the owners.

Everyone was concerned with the price, first and foremost, which far exceeds the cost of a gasoline-powered car that is similar in terms of size and functionality.

A participant in the rally, Vladimir Sokolov, remarked that an electric car in Russia can cost around 2 million rubles ($61,720).

“Many of my friends and acquaintances who prefer executive cars still do not see the sense in buying one of these. If they cost around 600,000–900,000 rubles ($18,500–27,780) they would gladly buy one. The dimensions are not great however, and it would be hard for anyone who has become accustomed to a Mercedes to adjust to an electric car,” says Sokolov.

The plan is to balance that prickly cost with government measures, among other things. Thus, parking in the center of Moscow — for which a fee of $1.4 per hour was recently introduced — will be free for electric cars, starting Aug. 1.

One can also save on servicing. “Whereas before I spent, on average, 20,000 rubles [$620] on servicing my old car, now my expenses add up to almost nothing,” says Sokolov.

There are just 40 of these stations in the Russian capital, although there is a plan to bring their numbers up to100 by the end of the year.

Vasiliy Panavits thinks that there is, perhaps, no need to build special charging stations: “Any eco car can be charged from a standard 220V supply; public spaces need only be fitted with these charging points. People should be free to charge their vehicles in restaurants, clubs, shopping centers and offices.”

Old-timers' rally in Moscow: race of the fastest among antiques

According to official figures, there are currently no more than 200 electric cars in Moscow. Naturally, these rare vehicles attract attention from other drivers, as electric car owner Dmitry Nikoforov notes.

“Other car drivers often stop me and ask about the make of car—and they are very surprised when they find out how economical it is,” he says.

On average, a single charge is sufficient for a little over 90 miles per day. Neither Vladimir nor Dmitry has made any long journeys yet, but both are unanimous in their assertion that, for them, an electric car is perfect for traveling around Moscow.

The electric cars produced by the American company Tesla are capable of journeys in excess of 185–250 miles; however, these vehicles have yet to reach Russia.