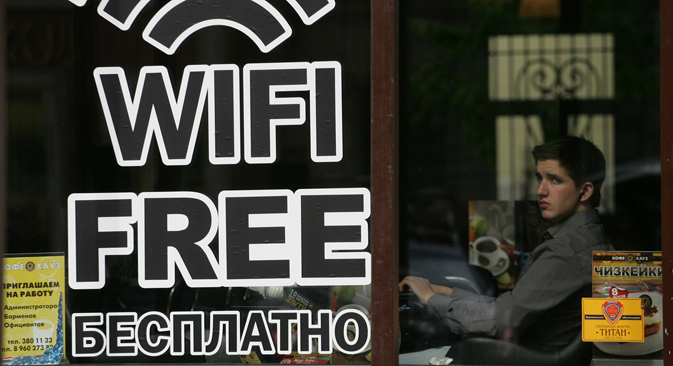 Twenty-five percent of Moscow’s secondary educational institutions currently have their own Wi-Fi networks, and, by the next academic year, all of its schools should have free Wi-Fi. Source: PhotoXPress

Internet access is available on public transportation, in parks, and in colleges and universities.

Russia has a population of 147 million people, 57 million of whom are Internet users. According to data from 2010, one-in-three of those 57 million use their mobile phone or another mobile device to connect to the Internet, making 19 million people potential subscribers to a service that could connect them to a free Wi-Fi network.

Most of these 19 million are concentrated in large cities with populations of over one million people—and it is in these cities that the market for free Wi-Fi services has been burgeoning in Russia’s since 2011.

The capital owes its position to its well-developed network of restaurants and hotels, even though other cities’ free Wi-Fi is concentrated primarily in service establishments as well.

There are, however, other areas to which free Wi-Fi has spread, such as in educational institutions, public transportation and green spaces — parks, squares and other open, public places.

It was originally launched as a six-month project, but, by the end of the original timetable, plans had been set to ensure free Internet access on all of Moscow’s buses and trolleybuses. The project has not yet been completed.

In other cities, free Internet access on ground transportation has expanded.

MTS’s main competitor in the market for equipping these vehicles with Wi-Fi is Beeline.

Beeline spokesperson Anna Abasheva said, “Projects for providing Wi-Fi on public transportation are being carried out in Murmansk, Kaliningrad, Petrozavodsk, and St. Petersburg, where we have equipped Wi-Fi routers on more than 300 vehicles in total.”

In most cases, the conditions upon which city administrations agree with service providers do not bring in a profit; companies set up free Internet access on public transit at their own expense, and, in return, they receive free advertising space.

Free Wi-Fi in the metro

Another ambitious, public-transport Wi-Fi project aims to ensure free Internet access in Moscow’s underground system. This undertaking demands especially serious investments from the service provider(s) that would prepare and maintain it; estimates vary from 1.6 billion rubles (almost $50 million) to 7 billion rubles (over $216 million) — prices potential investors are in no hurry to pay.

The auction for setting up Wi-Fi across the city’s underground system has been postponed twice already: The first one began on Dec. 21, 2012 and was supposed to end on Jan. 15 of this year, but the closing date was extended to Jan. 28 and then Feb. 4.

When the auction did close, not a single offer had been submitted; the media cited low potential payoffs in the face of exorbitant costs as the cause.

An Interfax source in Moscow’s transportation industry reported that a new bid for setting up Wi-Fi in the metro would be held on July 26.

The winning company will have to have Wi-Fi running on the ring and Kakhovskaya lines within 21 weeks of the day an agreement is reached. Officials promise free Wi-Fi in all metro stations within a year.

Interestingly enough, MTS has already had success in equipping a subway system with Wi-Fi: The service provider has already set up wireless Internet access in four out of 14 Nizhny Novgorod metro stations.

Fourteen of Moscow’s parks have free Wi-Fi, and all but Gorky Park (whose Wi-Fi is run by the company Yota) have been equipped at the city’s expense. Megafon runs its own free networks, in parallel with the city’s, in 12 of the parks.

Projects for setting up free Wi-Fi in open spaces are being carried out in other regions as well. MTS offers free Wi-Fi at ski resorts in the Sakhalin and Novgorod regions.

Oryol city’s administration covered the costs of setting up routers in two city parks; there should be free Wi-Fi in several squares in Ufa this year; and, in Tyumen, a free Wi-Fi network consisting of 54 hotspots was unveiled all at once.

The hotspots are located in popular locations throughout the city — railroad stations, public squares, near sports and recreational complexes, and at health and educational institutions.

At the federal level, proponents are lobbying for free Wi-Fi at Russia’s educational institutions.

Twenty-five percent of Moscow’s secondary educational institutions currently have their own Wi-Fi networks, and, by the next academic year, all of its schools should have free Wi-Fi.

MTS has a two-year contract for equipping Moscow’s primary and secondary schools with Wi-Fi networks, as well as for filtering content by limiting student access to sites with illegal and adult content.

The capital is also considering equipping its universities and institutes with Wi-Fi, with the costs coming out of the municipal budget. Moscow Mayor Sergey Sobyanin promised that free Wi-Fi could be ready in the main buildings of Moscow’s universities in as little as two years.

Some Russian regions are solving the problem of installing Wi-Fi in educational institutions by attracting communications providers.

For example, VimpelCom took it upon itself to set up Wi-Fi in several colleges and universities in Ulyanovsk and Nizhny Novgorod. In Nizhny Novgorod’s case, however, free Internet access was included only for students who use Beeline.