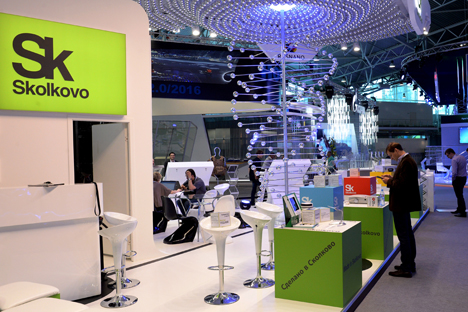 Key indicators of effectiveness have already worked for Skolkovo: a quarter of the patents registered in Russia’s IT industry come from Skolkovo participants. Source: RIA Novosti

After a year of limbo, the “Russian Silicon Valley” has received a guarantee from the government for financing through 2020.

The Skolkovo Innovation Center near Moscow — Russia’s response to California’s Silicon Valley and brainchild of Prime Minister Dmitry Medvedev — has received a long-awaited answer from the government concerning financing.

The deputy minister of economic development, Oleg Fomichev, told Vedomosti that the project will receive a total of 135.6 billion rubles ($4.1 billion) from the state budget by 2020.

Budgetary funds are already clearly allocated in the program, for how much is needed and where. Citing data from the program of the director of the Ministry’s Department of Innovation, the creation of an innovative environment will cost 57 billion rubles ($1.7 billion); the development of the Skolkovo Institute of Science and Technology, or Skoltech, will amount to approximately 42 billion rubles ($1.2 billion). It is proposed that close to 37 billion rubles ($1.1 billion) will be spent on infrastructure and 32 billion ($972.5 million) on grants to participants.

In the Skolkovo fund, financial resources from the state budget had previously been scheduled through 2015. Starting in 2012, financing was gradually reduced: Budgetary funds for the development of an innovative project had to be replaced by private sources.

With news of the government’s renewed pledge to finance the innovation center through 2020, Skolkovo’s streak of misfortune has thus comes to an end. It lasted nearly a year in limbo, starting last fall, when the Accounts Chamber announced a number of violations in the fund upon conclusion of its audit.

Some of these violations even interested the Investigative Committee of the Russian Federation. Primarily, the Accounts Chamber was doubtful about the transparency of the procedures related to the awarding of grants for innovation.

A federal official told Vedomosti that, after first deputy to the chief of the administration Vladislav Surkov—one of the founders and the curator of the Skolkovo fund — left government, many officials predicted a gradual decay for the innovation center.

The president of Russia, Vladimir Putin, considers the project artificial and has always distanced himself from it; he has never once even visited the construction site.

Putin believes in future of Skolkovo

Skolkovo itself has promised to become more transparent. The vice president of the fund, Alexander Chernov, expects clear criteria to emerge for evaluating the effectiveness of the innovation center.

He lists several possible target indicators — the quantity of jobs created by the residents of the fund, the share of their products on the market, and the number of patents registered by its residents.

Key indicators of effectiveness have already worked for Skolkovo. One of them has almost been reached: There are already 941 residents in the innovation center, and the aim is to have 1,000 residents registered.

In addition, a quarter of the patents registered in Russia’s IT industry come from Skolkovo participants. Chernov emphasizes that the displacement of budgetary funds by private investment will continue as planned. One of the criteria for the fund’s effectiveness is that its proportion of private investment be significantly higher than public funding.