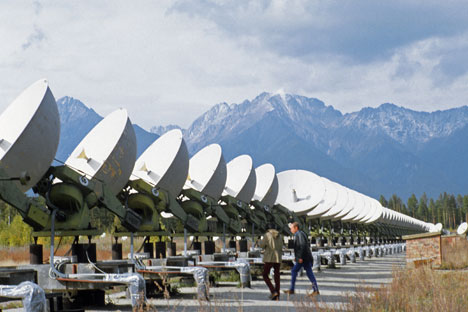 The new gamma ray telescope, the Tunka HiSCORE, will be ten times more sensitive than its predecessors. Source: ITAR-TASS

A new gamma ray telescope complex is currently been built in Siberia. A joint project that sees Russian and German astrophysicists working side by side, the new equipment promises to impact significantly research in the space sector.

The rapid and global development of electronic optical technology has made cosmic research possible not only through orbital and interplanetary devices, but also using ground-based telescopes.

In three years a unique international space gamma telescope complex, designed for detecting high-energy particles, will be up and running in the Irkutsk University astrophysics labs in Tunka valley, located in southeastern Siberia.

"There is not another one in the world like it," said the rector of the university Aleksandr Arguchintsev. "It will detect high-energy particles coming from the universe. In the Tunka valley it will be possible to study particles with energies much higher than those in the famous Large Hadron Collider."

A gamma ray telescope is different from conventional telescopes in that it is a combination of optical equipment and tools that detect charged particles that are formed as a result of the interaction between cosmic rays and the atmosphere. This gamma ray telescope will occupy around 100 square kilometers, while its detectors will be located at 100-meter intervals.

An international team of Russian and German astrophysicists is currently working with 175 sensitive light detectors located over an area of 3 square kilometers. When monitoring cosmic radiation, placing the detectors at these distances provides greater sensitivity than with traditional telescopes.

Over the next three years the optical detectors designed to study cosmic radiation  - the largest in the world - will be built, and the number of light sensors will increase from 175 to 1000. The total area of the array will be 10 square kilometers.

The new gamma ray telescope, the Tunka HiSCORE, whose construction will be headed by German scientists and technicians from the Max Planck Institute for Physics in Munich, will be ten times more sensitive than its predecessors.

It will make it possible to study for the first time unique objects such as pevatrons, powerful sources of gamma rays with a million billion times greater energy than visible light photons.

Germany is providing equipment for the telescope at a total cost of €70 million and directing the construction. The main costs of the array will be covered by a grant that the Irkutsk scientists were awarded in April.

The scientists plan on building a test installation consisting of 20 detectors by the end of the year. A telescope with an area of 1 square kilometer should be built by 2015.

"The advantages (of the telescope, note of the editor) for Russia are obvious.” emphasized Aleksandr Arguchintsev. “Local scientists will not have to travel abroad to work on particle accelerators. Besides organizational difficulties, this will also allow our scientists to save time; the waiting time for scientists to work on an accelerator often stretches out for months, or even years.”

Incidentally, the telescope will be the second system of its kind in Siberia. Another ground-based installation, an optical laser system, will be installed in the Altai German Titov Optical Laser Center by 2014.

This high power telescope, weighing 100 tons, will be mounted on a mountain top, at a height of 650m. It will track space objects with a speed of 3 angle degrees per second and an accuracy of about 2 angle seconds.

Russia to watch brightest meteor shower of 2013 on Monday night

According to open sources, the Altai telescope will be able to detect small space objects and spy satellites, track objects in infrared light in the absence of sunlight, locate low-orbit objects without angle reflectors, and perform laser localisation of the moon to determine the impact of the moon-earth system on the orbits of GLONASS satellites.

"An object the size of a matchbox will be visible at a distance of 200 km," noted deputy chief engineer of Precision Instrument Systems scientific and production corporation Yevgeny Grishin. "In addition, the system can detect a photometric signal from an object 2-3 cm in size at a distance of 36,000 km," he said.

The powerful equipment of the new telescope will also help answering questions related to deep space, as well as detect and determine the paths of space debris and meteoroids in the immediate vicinity of Russian space groups and the international space station.

According to experts, the only equivalent to the telescope will be the American AEOS system in Hawaii.