Armavir radar keeps an eye on the Middle East 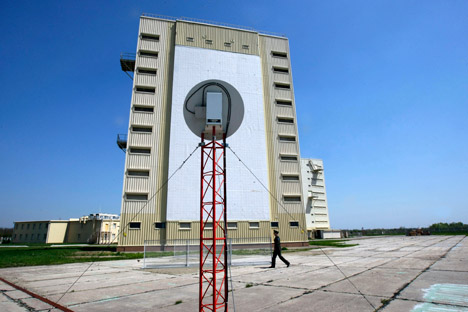 A radar station Voronezh-DM located at Armavir covers more than 3,7 miles , including the entire Black Sea and Mediterranean. Source: ITAR-TASS

Russian military experts describe the Armavir radar station’s quick detection of the launch of two ballistic missiles near the Syrian coast as a success for Russia’s missile defense system. They believe that only Russia is capable of tracking such missile launches in the region at the moment.

As was subsequently reported, the launch was a joint Israeli-U.S. missile experiment. The Israeli military initially claimed to have no knowledge on any launches. Several hours later, however, the Israeli Defense Ministry admitted to the launch, which it said involved the firing and tracking of a Sparrow target missile and also consisted of “testing of the Arrow 2 antiballistic shield.”

Russian military experts believe that, by conducting this launch, Israel and the U.S. were testing the readiness of Syria’s air defenses and the reaction of Syria’s allies.

“I think that, on the one hand, this was a planned event, but, on the other, we can see that its timing reflects an awareness of the situation. Perhaps they were trying to hit two birds with one stone: to bring psychological pressure to bear on Damascus, which they hardly succeeded in doing, and also to test the condition of Syria’s air defense system,” said Maxim Grigoryev, president of the Fund for Research of Democracy Problems.

“Declarations by the military often tend to confirm exactly what they purport to deny,” the expert added in a comment on a Pentagon spokesperson’s statement that this test had nothing to do with the U.S. considering military action against Syria.

According to Vadim Kazyulin, director of the PIR Center Conventional Arms and ATT Project, it is inconceivable that NATO cannot pinpoint any missile launches in the Mediterranean. “The Earth is under pretty tight surveillance. Experts say that even firearm shots can be monitored, let alone missile launches,” he said.

“Cyprus is home to the Echelon radio and electronic surveillance of the region (the ‘region’ having a broad definition): Its coverage extends to the Urals. Granted, this is not a radar, but obviously all those technologies work together,” Kazyulin said.

His colleague at the PIR Center, retired Lt. Gen. Yevgeny Buzhinsky, a former ranking Defense Ministry official, did not rule out that two U.S. warships equipped with the AEGIS — a system capable of detecting missile launches — might be stationed in the area. Yet Buzhinsky is confident that only Russia could detect such a missile launch in the Eastern Mediterranean with 100 percent reliability.

“Only Russia and the United States possess early warning systems and, in this particular case, America had no need whatsoever to detect the launch,” Buzhinsky said.

According to experts, the Armavir radar station that detected the ballistic launch performed in accordance with its specifications: Its coverage extends to 6,000 kilometers (3,728 miles), including the entire Black Sea and Mediterranean.

Antonov also called on the launch participants to be more responsible for regional security and “not to play with fire,” pointing out that one of the countries that took part in the launches is a permanent member of the U.N. Security Council.

Russia’s only operational radar station outside its territory is the Volga, which is located in the Ozerechye township near Minsk in Belarus.