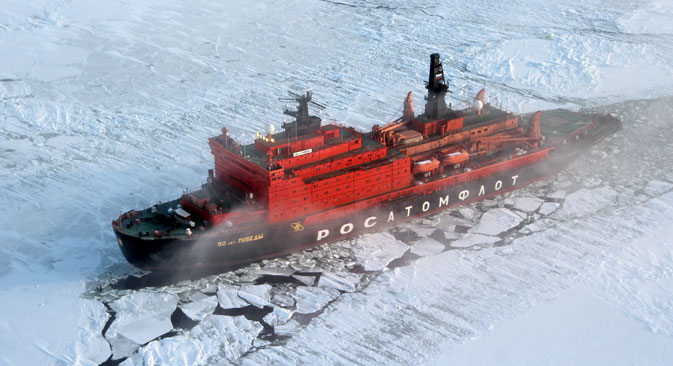 The floating nuclear power plant can be used to generate electric power and heat, and also to desalinate seawater. Source: ITAR-TASS

Environmentalists have hindered the development of floating nuclear power plants in other countries, while Russia is gearing up to test its first vessel of this kind.

The main task of the IAEA General Conference taking place in the middle of September is to set out specific plans for the development of the nuclear power industry on a global scale. “We expect the conference to help set specific targets for the roll-out of new technology in the areas on nuclear power generation and nuclear safety,” Russia’s permanent representative to Vienna-based international organizations, Vladimir Voronkov, said.

These include, among other things, nuclear technology in the ocean environment — a key subject of Russian research into the use of nuclear energy sources.

The world’s first commercial icebreaker, the Lenin, was built in 1957. It had a lot of advantages over conventional ships and became the first surface vessel in history to pass north of Novaya Zemlya in 1971.

The idea to use nuclear power on the water first became viable in the mid-1950s. The first commercial passenger/freight vessel, the Savannah, built under President Eisenhower’s special program, was launched in the United States in 1962. Nonetheless, all American, German and Japanese initiatives in this area eventually failed.

The ability to sail autonomously for long periods of time pointed to an appropriate region to operate such vessels — the Arctic. Nuclear-powered engines demonstrate their advantages in the polar regions, because icebreakers continuously have to operate at full throttle. Icebreakers remain at open sea for a long time between ports of call, as leaving the route to refuel would result in heavy losses.

Still, a nuclear-powered icebreaker fleet is far from the only thing of which Russia’s nuclear power industry is capable. While renewable energy as a means of staving off an energy crisis is still far from finding efficient industrial implementation, a solution to this problem could be found in the nuclear sphere.

One promising idea involves floating nuclear power plants, which Russia was first to decide on building. The idea was actively debated in other countries, too, but it was rejected due to opposition from environmentalists.

Construction on the first floating nuclear power plant, the Academician Lomonosov, started in 2009. According to the CEO of the state-owned corporation Rosatom, Sergei Kirienko, “We already have prospective international customers, but they want to see how the pilot project is implemented.”

The floating nuclear power plant is an engineless vessel with two reactors onboard. It can be used to generate electric power and heat, and also to desalinate seawater. Its service life is estimated at least 36 years — three cycles of 12 years each, with reactor reloading in between. The crew, including replacement and reserve headcounts, numbers around 140.

Construction and operation of such power plants is estimated to be much cheaper than conventional power plants, which should guarantee strong demand. In addition to exports, floating power units will become powerful sources of electricity, heat and freshwater for Russia’s remote regions.

However, safety is the main reason behind the success of nuclear projects. Since the project is based on the tremendous experience of operating icebreakers and submarines, the degree of its safety is very high. According to experts, facilities of this kind are the world’s most reliable today.

In general, floating nuclear power plants could become a unique national project. If it is successful, Russia will remain the leading global energy supplier.