Scientists create better guide to search for life in space 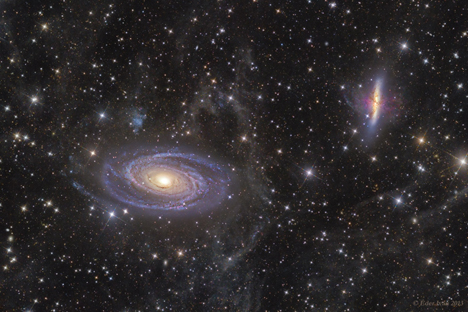 The unique nature of the waveguides created by the scientists in the Urals lies in their specific optical characteristics. They are able to intercept stellar radiation and intensify the light reflected by an exoplanet. Source: NASA / Ivan Eder

Waveguides developed by scientists in Yekaterinburg are helping astronomers decide which planets in outer space are most likely to support life.

One of the most significant discoveries in astronomy in recent decades has been the so-called exoplanet—planets that orbit stars beyond the limits of the Solar System.

The first of these “extrasolar” planets was discovered in 1988, and, up to the present day, scientists have discovered another 1,000 exoplanets. Although a theory was put forward back in the mid-19th century on the existence of exoplanets, more than a century had to pass before this was confirmed.

A waveguide, or an optical glass fiber, is a thin thread made from transparent material that is able to conduct light radiation fed in at one end. Today, waveguides are used mostly in fiber-optic systems for a very high-speed (in comparison with the speed of light) transfer of information. Specifically, the majority of information channels for the World Wide Web are based on this same technology, which has developed very quickly in recent years.

Searching for these celestial bodies is a very complex task. The principal difficulty is that neither traditional optical telescopes nor even the most modern radio-telescopes are predisposed to searching for exoplanets.  Radiation from a star, around which the planetary system can exist, is so strong that it is possible to register the reflected light from celestial bodies located in very close proximity.

Today, however, even indirect observation methods only succeed in locating exoplanets with a mass close to that of Jupiter or Saturn.

Scientists, though, are much more interested in the question of the existence of exoplanets similar to Earth, on which there is the potential for life in one form or another. In this case, other issues aside from the small size of these objects come to the fore: Certain conditions are necessary for living matter to emerge, such as a large quantity of water on the planet in liquid form, as well as very specific composition, density and temperature to the atmosphere.

Up until now, measuring all of these parameters on distant planets would appear to be an impossible task. A new development from scientists at the Center for Infrared Fiber Technologies at the Federal University of the Urals has the potential to cope with all these issues.

Over the course of almost 30 years, one of the laboratories at the center, under the leadership of Liya Zhukova, has been developing a completely new type of waveguide. Thanks to these waveguides, much more accurate research into the light spectrum emitted by exoplanets is becoming possible. This, in turn, helps to measure the composition, temperature and density of the air envelope surrounding a planet, as well as the presence of water vapor within it.

The unique nature of the waveguides created by the scientists in the Urals lies in their specific optical characteristics. They are able to intercept stellar radiation and intensify the light reflected by an exoplanet. “In this way, it is possible to see planets similar to Earth with the help of a telescope fitted with our waveguides acting as a filter,” says Professor Aleksandr Korsakov, one of the creators of the new waveguides.

The optical fiber possesses these properties because of the use of compounds of halogens and metals, including chloride, bromine and iodine. Halide crystals grown in Zhukova’s laboratory have become the basis for a new type of optical fiber.

Moreover, application of this new technology is not limited to searching for exoplanets. It can be used to solve some terrestrial challenges that require the definition of the composition of matter in terms of the light spectrum—either passing through it or reflected by it. These challenges exist, for example, in the chemical, petrochemical and food industries.