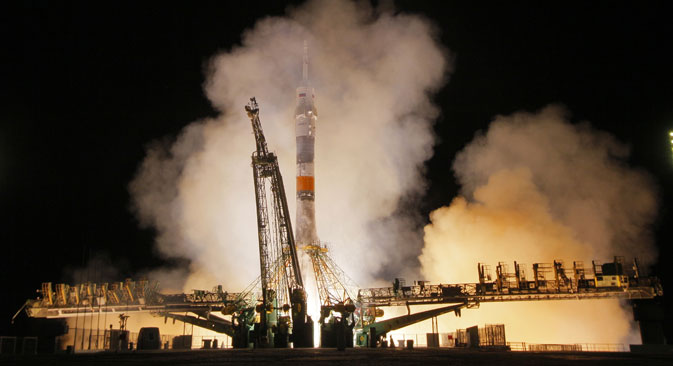 The Chinese space program is qualitatively equal to Russia's. Moreover, the design of the Chinese Shenzhou spacecraft is based on the Soviet Soyuz. Source: AP

Over the past few years, Beijing’s investment in the aerospace sector has rapidly grown. Expert discuss whether China could overtake the leading countries in the industry.

According to public data for 2011, China exported $3 billion worth of high-tech goods, including aerospace. The corresponding Russian figure is $1.1 billion. Does this indicate that China is becoming a leader in the aerospace industry, rapidly catching up with Russia?

In 2012, according to official world statistics, twenty-four Earth survey satellites, owned by 13 different countries and organizations, were launched into orbit around the Earth. For the fourth time since 2007, China was the country with the most remote sensing satellites, launching eight of them. China beat Russia by a large margin: Russia launched just three satellites.

Meanwhile, by 2020, Russia plans to provide all types of sensing — radar, optical and others — and will stop purchasing data from foreign satellites. For this purpose, according to the advisor of the Russian Federal Space Agency, Valery Zaichko, Russia plans to dramatically ramp up its remote sensing satellites — from four to 26. With this, the share of Russian satellites in this market is expected to grow from 25 to 80 percent.

However, this data only tells part of Russia's aerospace story. After all, there are still manned space vehicles, where Russia's leadership seems to be unchallenged as always. Yet facts are facts.

Fact number one: China traveled the path from the first manned launch to astronauts working in orbit one year faster than the Soviet Union. The first Soviet crew boarded the Salyut-1 space station in 1971, ten years after Gagarin's flight; Chinese astronauts were on board the first Chinese station, Tiangong-1, in 2012, nine years after the Chinese first sent Yang Liwei on their first manned launch.

In particular, the Shenzhou can undock one module in orbit when an astronaut returns to Earth, while the other astronaut remains in space working in the other module as an automated laboratory. Another fundamental difference between the "pupil" and the "teacher" is the better power-to-weight ratio of Shenzhou and its much larger internal volume.

Fact number three: Without a doubt, long-term orbital stations are the pride of Russian manned space exploration. However, the lion's share of the international space station went for American-style multi-use spacecraft.

Everything is nearly ready in China for the launch of the country’s first rover, which will probe the surface of the moon. By 2020, China plans to send an ambitious manned expedition to the moon, as well.

Moreover, the Russian segment of the station is still not fully finished, and the new Russian orbital modules exist, for now, only in official statements. Of course, China is still far from Russia in numerical terms of orbital stations; but quantity, like experience, can be acquired. By 2020, China plans to build the Tiangong-3—a low-orbit tri-module station weighing about 60 tons.

What is important here is the question of advanced technology, the share of which the space industries of the two countries have is crucial. As People's Daily, the official newspaper of the PRC, reported in early October, "China currently ranks third in the world in terms of total investment in research and development, and is gradually narrowing the gap with the developed countries and strengthening its status as a great power in science and technology."

China spent 14.2 percent of all research and development funding in the world in 2012. They trailed only the U.S., who accounted for 31.1 percent, and the European countries, with a combined share of 24.1 percent. China overtook Russia, which had a global share of 1.9 percent.

At the same time, China's leaders continue to promote the idea of turning away from their role as the world's "assembly line," in order to make the country into a global outpost of development and production of high-tech products. Some neighboring countries are already complaining about the growing exodus of their scientists to China — in particular, Japan.

What is the Russian reality in this story? According to the first vice president of the Russian Club of Financial Directors, Tamara Kasyanova, the main problem of Russian scientists is that they lack the necessary conditions, including financial ones.

Meanwhile, a corresponding member of the Russian Academy of Cosmonautics, Yuri Karash, noted that, "Russian engineers and designers are smart enough to tackle the most innovative and ambitious projects in 'far' space that can be found at the current stage of development of science and technology."

Time, however, is relentless. Today, the Chinese space program is qualitatively equal to Russia's. Quantitatively, the "student" is still far behind the "teacher." However China’s desire to become a world leader in space, as well as their balanced, modern science and technology policy, will soon help China bridge the gap.