Don’t want to shovel your driveway? Get a robot snowplow 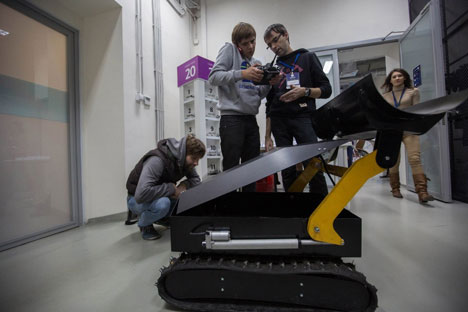 The first series of 75 robots is planned to be produced this winter. Source: Press Photo

Russian entrepreneurs have developed a snowplow that can be programmed to clear a route and will send the owner a text when the job is done.

A team of engineers from the Urals city of Perm have developed a robot snowplow for suburban homeowners. The idea first came to Oleg Kivokurtsev, a postgraduate student at the Perm Polytechnical University when he saw the number of people who were admitted to hospitals each year when the snow started falling.

“We were repulsed by unofficial statistics that stated that 838 people sought medical assistance at first aid stations in Moscow on the first day of a heavy snowfall. The streets are rarely cleared of snow more than twice a day – and that is not sufficient,” Kivokurtsev said. He founded OMI-Robotics and developed the robot concept, which was christened the OMI-Plowv.

Kivokurtsev developed the first prototype of the system with designer Igor Yeremeyev and engineer Maksim Uteyev in March 2013. “This really was a garage innovation,” said Uteyev “The robot was put together using parts of a sawn-up cabinet, while the internal workings were formed of motors from an electric window system. The frame we painted in a standard black color from a stain-repellent.”

As they developed the concept further, the developers made an agreement with the Krasnokamsk Repair and Maintenance Plant to use one of its production lines to assemble the robot for free. This version, which was produced in May, gave the OMI-Plowv more powerful caterpillar tracks and batteries that allowed the robot to operate for 8 hours after a 6-hour charge from an electric socket.

Read more! RoboCV: A driverless car will be a reality in 5 to 10 years

The OMI-Plowv can clear around 300 square feet of snow in about 5 minutes, piling it in a designated location with the help of a bucket. However, since the robot is only 23 inches tall, it can manage snow of no more than 4 inches deep.

The OMI-Plowv sends the homeowner a text when the snow has been cleared and another when it has a low battery. It can be driven manually with the help of a joystick or via a Wi-Fi enabled keyboard.

The robot can also learn the route it needs to clear. A program installed on a computer can receive images taken from a video camera on board the robot, and the computer can feed the system signals to control the caterpillar tracks and the shovel. The robot’s software counts the number of turns of the wheels controlling the caterpillar tracks, which allows the system to memorize the route.

By this winter the founders of the start-up company hope to install an intelligent control system in OMI-Plowv that will allow the robot to decide for itself whether an area needs to be cleared of snow or not. The system will be fitted with meteorological sensors to measure temperature and the depth and consistency of snow.

Robots to begin testing as patrols in Moscow parks

OMI-Robotics is planning to sell the system via a network of dealers who work in robotics. OMI-Robotics’ first client was a citizen of the Czech Republic who saw the videos about the Russian robot on You Tube.

After receiving the system, the client contacted Kivokurtsev again and requested that he fit the robot with a manipulating arm to pick up trash. After that request, the developers decided to produce a based that could be fitted with different accessories. Each new option will cost the client around 30,000-50,000 rubles ($911 – $1,518).

Today, OMI-Robotics has preliminary agreements with 30 potential dealers. The start-up is also taking pre-orders via its website. The start-up hopes to be able to sell a pilot batch of 75 robots in December. By next winter, OMI-Robotics is planning to expand its customer base, offering its invention to municipal services and companies.

The founders have spent around 500,000 rubles ($15,185) developing the system, part of which was funded by grants. The company needs another 1.5 million rubles ($45,555) in order to launch series production and to promote the product. In September, OMI-Robotics was given the highest rating for its attractiveness to investors within the confines of the Russian Startup Rating - AAA.

Robots: supertechnologies made into reality

Oleg Baskov, the general director of the Zelenogradsk tech transfer center thinks the project has potential, but will requires a huge amount of investment to succeed.

“Up to this point, the team has demonstrated a large remote controlled toy. However an intelligent control system is required with navigation and artificial vision in order for a robot to truly operate independently, and this is a task on another level of complexity. Hundreds of millions of dollars and decades of work have been invested in this technology so the start-up company have a long road ahead of them to understand this challenge and to solve it,” Baskov.