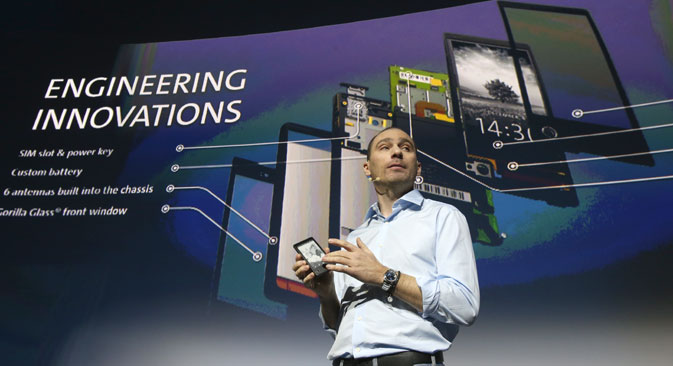 The unique dual-screen Russian smartphone was launched in Moscow on Dec. 4 and will hit stores abroad as soon as next month.

The YotaPhone, a radically new Android smartphone designed by Russian engineers, went on sale in Russia on Dec. 4. The same day, Yota Devices CEO Vlad Martynov presented the new product to the media at the Garazh Modern Arts Center in Moscow.

With its unusual design and functionality, the phone has already piqued the interest of technophiles around the world. Apart from the conventional LCD screen on the front, the YotaPhone has an always-on electronic paper (E-ink) screen on the back.

The idea is that the black-and-white screen on the back will always display relevant information such as a calendar, the current weather conditions and new text messages. Users can arrange the corresponding widgets on the home screen to their own liking; the information these widgets display will be updated in real time.

The designers of the YotaPhone believe that this option will break smartphone users of the habit of constantly flicking the screen of their phones off and on to check for any new messages or updates.

The new gadget will also be able to replace dedicated e-book readers; its battery should last at least 50 hours in the reading mode. Users can also share quotes from the books they read on social media through a couple of simple gestures on the sensory pad under the E-ink screen.

The YotaPhone runs the 4.2.2 version of the Android operating system. Its developers have also come up with a whole series of unique apps, including “Teach me,” which helps users memorize foreign words and expressions, and “InternetHub,” which integrates RSS feeds and updates from social networks.

It has been a year since the first prototypes of the Russian smartphone were unveiled. Since then, the YotaPhone has generated a lot of interest abroad. It won the Best Product award at the Consumer Electronics Show (CES) in Las Vegas and was awarded a Golden Lion award in the Innovation category at the Cannes Lions International Festival of Creativity.

Yota Devices’ Martynov said that such international recognition has come as a pleasant surprise because Yota Devices has yet to launch a proper promotion campaign for the YotaPhone. So far, the company has been dedicating all its energies to developing a quality product and launching mass production.

Not all the designers’ wishes were fulfilled, however. The final version of the device does not include a wireless charging option; the phone relies on a conventional micro-USB charger instead.

Some media outlets dubbed the YotaPhone "the Russian iPhone" at the CES show. Speaking at the media event at Garazh, the company’s CEO even had to fend off some barbed comments about his missing Jobs-style black turtleneck. But he did admit to RBTH that charges of copying Apple’s aesthetics were a little flattering.

PHOTO OF THE DAY: A presentation ceremony for YotaPhone

“Apple is a great company, and a role model for us. I think we need to learn from people who are very good at what they do, and then try to beat them at their own game," Martynov said.

But for all the interest the YotaPhone has generated in the United States, there are currently no plans for bringing the first generation of the device to the American market. The key exports market is Europe, where the YotaPhone will be distributed via Ingram Micro – which is, ironically, a U.S. company.

The new Russian smartphone will also be available in Asia, as well as the Middle East, where interest has proved unexpectedly strong.

Yota Devices has not made any sales projections for the new product, but it is known that about 10,000 units have already been pre-ordered online.

“It is difficult to make any projections when an entirely new type of device is being brought to the market,” Martyanov said. "But we hope the product will be a success, of course."

The company’s retail partners share that optimism; they believe sales could reach millions of units.

The YotaPhone has been priced lower than originally expected; the smartphone will cost 19,990 rubles ($600) in Russia and 499 euros in Europe. Nevertheless, some experts argue that the device is not actually that much cheaper than some of the bestsellers in this market segment.

They also point out that apart from the E-ink screen, the product's other specifications are fairly standard for smartphones in this price range.

“I don’t think there will be a huge demand for the YotaPhone,” said Evgeny Alminov, head of mobile devices and IT at J'son & Partners Consulting. “For the money it costs, one can find a more high-spec phone."

There is also one other potential problem: the always-on E-ink screen can make it easier to gain access to the owner's personal information.

One of the attendees at the launch presentation was less than impressed.

“It looks stylish and practical – but in actual fact, not everyone will be comfortable with the idea of their text messages and calendar being visible to all and sundry," the attendee said. “Of course, it is possible to set it up in such a way that no personal information ever appears on the second display - but in that case it just becomes a glorified watch, so what's the point?"