Conversations with a cosmonaut: Why a film "about space" has no space in it 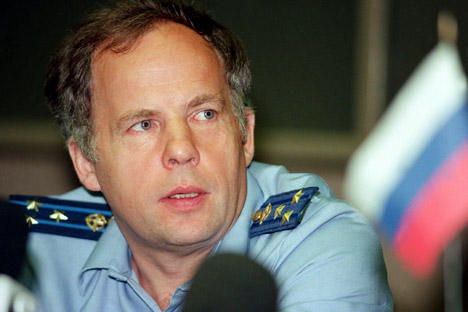 Anatoly Solovyev: My spacewalking record is just a a piece of statistics. Source: ITAR-TASS

In the new Hollywood film "Gravity" (in 3D), actor George Clooney tries to break the spacewalking record currently held by Russian cosmonaut Anatoly Solovyev. RBTH talks to the Russian cosmonaut about the film and about everyday life in space. In the interview, Solovyev explains why cosmonauts like certain sci-fi authors, how to clean the windows on a space station, what the secret of Russian equipment is and why "Gravity" is not even a movie.

Russia Beyond the Headlines: So, Anatoly Yakovlevich, what do you think about the film “Gravity”?

Anatoly Solovyev (A.S.): What is there to say? There is no point in trying to assess this film because it is just nonsense. It is not even a movie. More like a Tom and Jerry cartoon: they chase each other in space, spinning now 90 degrees, now 180, defying all imaginable laws of nature, are constantly fiddling around.

It reminded me of Disneyland: all those breathtaking rollercoaster rides, combined with the special effects, sound, colors, everything. Had the chairs been rocking and tossing, the feeling would have been complete.

RBTH: But what about the visual side of it? Was it at all like what you saw in space for real?

A.S.: Yes, the sunrise above the planet was indeed mesmerizing; it was well done, 100 percent as it really is. As for the rest, there is nothing even to discuss. Laws of physics are completely ignored: Newton, Kepler, Lagrange and others, are just non-existent.

You know, I would play this film to physics and mathematics students as a piece of homework with the task to identify all the numerous mistakes in its representation of the physical reality and to demonstrate, with the help of scientific formulas, why what happens in the film cannot be. Then this movie would be of use at least to someone.

RBTH: What do you think about the characters?

A.S.: I am amazed at how inappropriate the female astronaut's behavior is. She thinks is acceptable to argue with the head of the mission, loses it in a time of crisis. It is simply unthinkable, as if she had never received any space training.

RBTH: But the filmmakers said from the very beginning that it is a sci-fi movie.

A.S.: Sci-fi? Arthur C. Clarke, back in 1945, calculated in his sci-fi stories the altitude at which communication satellites will be flying, and this is exactly where they are flying now. This orbit has now been named in his honor. Or take Ray Bradbury, Isaac Asimov. They wrote great stuff. I love reading them. That was science fiction, unlike the rubbish they come up with today.

RBTH: But weren't you pleased when they remembered you, and mentioned your name several times in the film?

A.S.: Yes, and I am grateful. Except that I am sure that Russian viewers will not notice that because people nowadays are not particularly interested in space exploration. This may be less so in Western Europe, in France, Germany, or Holland, where some enthusiasm still remains. Partly, I think, because those countries came to manned space flights later in their history, in effect they are only now starting to actively develop them. Whereas in Russia the interest has waned.

How to win over the Earth's gravity and stay alive?

As for the film, I don't think it gives any food either for the mind or for the heart. It is a rollercoaster ride, as I have said, not a film. Just visual imagery aimed at a child or an uneducated person. It has left me unmoved.

Incidentally, it does not present a very nice picture of the Russians: They blow up their satellite and thus cause the collapse of the satellite system of all the other countries. It is like when a guy is with a Kalashnikov, he is automatically a baddie, whereas if he is with an M16, he is a hero. I just feel sorry for the people who made this film, for them to have such a primitive mindset.

RBTH: Does your spacewalking record matter to you?

A.S.: It is just a fact, a piece of statistics. These happen to be my figures. I have never attached particular importance to them.

A.S.: That is done at the Mission Control, and we are simply told the figures afterwards. They make these calculations because, among other things, they are important for assessing the service life of spacesuits, the operation of all the systems, expendable materials, in order to know how much oxygen, etc. to send to the space station from Earth.

RBTH: Didn't you feel afraid of doing spacewalks? And indeed of just going into space, into complete isolation?

A.S.: I personally was not afraid: I had been trained not to be. On the contrary, it was exciting.

RBTH: And weren't you afraid that you might float into open space away from the station?

A.S.: One needs to understand that at the Cosmonaut Training Center we receive comprehensive training before the flight. That includes work in a hydrolab, zero-gravity flights, simulators, etc. After such intensive training and after practicing real scenarios, work in space seems like a most natural thing for a cosmonaut to do.

And when the moment of truth comes, you open the hatchet and walk into open space for the first time, you are sure of oneself because all the actions have been practiced a multitude of times. Of course, there are emotions too to deal with, but they are manageable. Confidence is born and built on Earth.

Read the second part of interview with Anatoly Solovyev tomorrow!