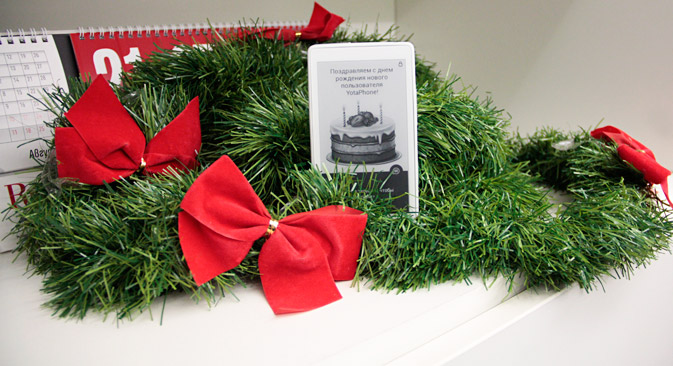 An RBTH editor spent a week with the Russian-designed, dual-screen phone to assess its upsides and downsides.

Just three weeks after its launch, YotaPhone has sold more 10,000 units online, and stopped taking new online orders from Europe in order to catch up with demand.

The phone is now finally available in Russia through retail channels, and sales began during the last week of December. But is the new gadget worth queuing for?

After a week of daily use, our editor has concluded that the YotaPhone represents an excellent idea still waiting to be properly implemented.

In terms of its screen resolution, processor, memory and battery, YotaPhone just about keeps up with the competition in its price range (400 to 500 euros).

Yota Devices hopes to recoup the YotaPhone development costs over the next two or three years. It expects to sell 500,000 units, half of them in Russia.

But specifications aside, let us not forget that the main function of any smartphone is to make voice calls and send messages. In that sense, YotaPhone has acquitted itself very well; it doesn't lose the signal, and its speaker is loud and clear.

Indeed, the reviewer even had to turn the volume down a notch. People on the other end of the line had no complaints, either.

All the missed calls and text messages can be displayed on the "electronic paper" e-ink display on the back of the phone. Yotaphone also adds a pictogram – a cat, a heart, or a cake, among others – above each text message based on its content.

It’s an interesting idea, but no more than that, since most users probably will not want the contents of their private messages to be visible to everyone.

That is why leaving the phone lying on the table does not feel very comfortable psychologically. Always keeping the phone in a pocket is not a very good option, either: at 133.6 x 67 x 9.99 millimeters, the Yotaphone is simply too large for that.

An immediate question that comes to mind when seeing the phone up close for the first time is, why in the world did they place the camera lens at the bottom?

Such placement is very awkward, and users are prone to taking lots of snaps of their own fingers at first.

Yota Devices chose the lesser of the two evils and opted for the unusual camera placement. Source: Slava Petrakina

In the end, all the upsides and downsides of the phone have to do with the vaunted dual screen.

The developers explain that the curve at the top of the back panel should encourage the user to place the phone on the table with its active display facing up.

Because of that curve, the top of the phone's body is too thin to house a camera. Besides, placing the camera at the top would also require the touch-sensitive strips of both screens also to be at the top.

Yota Devices chose the lesser of the two evils and opted for the unusual camera placement.

Even the most graphic intensive applications feel snappy on the YotaPhone, with no noticeable lag or stuttering. Playing games on the device’s 4.3-inch LCD display feels comfortable, and the display itself is very responsive.

Unfortunately, the same cannot be said about the touch-sensitive strips on either side of the phone. The strips are meant to replace physical buttons, but getting used to them is not easy, and some gestures do not register properly at first.

The reviewer had a jolly good time getting her colleagues to guess where the SIM card goes in this phone. But the designers’ decision to place the SIM slot under the power button does not seem like such a good idea after all.

The power/SIM slot assembly feels flimsy, and the user risks rendering the entire device useless if he or she is not careful. The main display cannot be woken up without the power button, and without the main display, the secondary one is also effectively useless.

Incidentally, there are no other removable parts in this phone: the battery is non-removable, and there is no microSD card slot. Still, the device has 32 GB of memory, which should be plenty for anyone not trying to cram all the episodes of their favorite series plus the entire discography of their favorite artists into their phone.

In theory, any information shown on the primary LCD display can be moved to the secondary e-ink display simply by sliding two fingers down the screen.

The problem is, there is nothing useful you can do with the resulting static image. In that sense, the phone’s advertised battery-saving feature that hinges on the energy-sipping e-ink display does not really work because the user has to switch to the main LCD display all the time.

The battery itself is quite large (1,800 mAh), but the phone does not last very long on a charge even with relatively moderate use. Other supposed advantages of the second display have also proved questionable.

The e-ink screen really is very good for reading news headlines or tweets. But any interaction with the phone requires the user to switch back to the primary screen.

For example, in order to like a Facebook status or leave a comment, the user will have to switch to the LCD screen, open the Facebook application, and navigate to the required page once again.

Reading books on the YotaPhone is not a very pleasant experience, either. The 4.3-inch e-ink screen is simply too small, even compared to the cheapest and smallest dedicated reading devices.

PDF files and other documents designed for the A4 format are simply unreadable. The phone’s native Bookmate application does not support these formats, while other reading apps for Android do not yet support the secondary screen.

With such manifest lack of usability, the e-ink screen on the back becomes all but redundant. All it can really do on a regular basis at the moment is display the time, the weather, and the battery level indicator.

On the whole, the Yota Phone is far from ideal, and it is clearly not a device for everyone. Many people will find it too bulky or not fast enough; others will want a bigger battery, or see no real use for the secondary screen.

And it is certainly true that for the 499 euros the phone costs, one can find a device with higher specs. It is worth remembering, however, that problems with the phone's main selling point, the e-ink secondary screen, all have to do with software.

Once more apps start supporting that screen, it can potentially become a lot more useful, making the Yotaphone a much more attractive proposition than it is now.