Conversations with a cosmonaut: Work in America 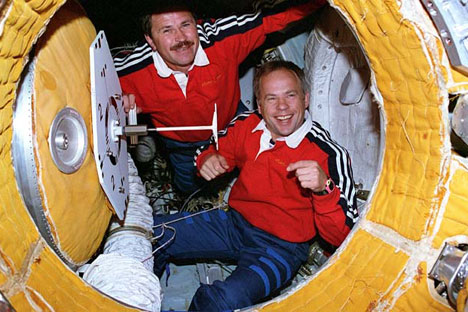 View of the Mir 19 commander Anatoly Solovyev (R) and flight engineer Nikolai Budarin preparing to close the hatch to the docking module which leads to the Mir space station, 1995. Source: NASA

This is the third part in a series of interviews with Russian cosmonaut Anatoly Solovyev. Solovyev spent some time working closely with NASA as part of cooperation with Russian space agencies. It is largely thanks to that work that there is now mutual understanding on projects like the International Space Station.

On living in the United States

I gained enormous experience working in the United States, and I found it very interesting to live there. I completed a space-training program in Houston. Then in 1995 there was the Atlantis docking to the Mir station, and I took part in that expedition.

We carried out a joint program, then the Americans went back to Earth with the previous Russian crew, while I and my partner Nikolai Budarin remained at the station for several more months and returned to Earth on a Russian Soyuz spacecraft.

Interestingly, in my passport I have a stamp made on my arrival in the U.S. but none on my departure, which means that I left the country via space, since no one on Cape Canaveral thought of putting a departure stamp in my passport.

Later I coordinated cooperation between our Cosmonaut Training Center and NASA. That work gave me a lot of extremely valuable experience. I had to deal with astronauts, engineers, and managers.

We prepared documentation, developed a common, standard language for communication since the criteria for assessing situations and taking decisions should be the same. There was a very active exchange of opinions and approaches.

On differences in approaches

I would not say that there is a fundamental difference between our and their school of space training and exploration. Generally speaking, the training concepts are very similar. But they have by far better funding. And they have very good simulators. Although ours are not a bit worse and can cope with their tasks 100 percent.

Part 1: Why a film "about space" has no space in it

As my colleague Gennady Strekalov - incidentally, he was one of the people in the Russian crew on Mir whom we replaced in 1995 - once said, we can do all the same things, but cheaper. Or take the spacesuit, for example.

I had practical experience of using both, the American and the Russian one. Ours is simpler, cheaper and covers a wider range of survival speeds and altitudes. Besides, their spacesuit is rather complex, one cannot put it on unassisted.

Our equipment is in no way worse, and as regards reliability it has very good backup mechanisms, in terms of functionality, instruments, etc. We have many levels of backup in all areas.

Consider the tragedy of the shuttle, for example. It was impossible to set up a backup mechanism there that would save astronauts' lives. The system has an inbuilt vulnerability when some of its elements cannot be replaced and at the same time are subjected to adverse conditions. The U.S. space program suffered a huge setback with the loss of shuttles.

Whereas we had instances when we would use up to three levels of backup for certain functionalities and in the end all ended well. Furthermore, even then there would be several backup levels still unused since some systems, like the landing capsule for example, have up to seven such levels.

You often hear the joke that the Russians have some secret weapon or other. Well, what we have is the desire to create a certain reserve that you can resort to in a moment of crisis. That is the main secret of Russian equipment.

That applies to all our hardware and equipment: the documents would list them as having some characteristics, while in fact you can be sure that there is a hidden reserve there too. To give you a specific example: During one spacewalk something went wrong and we together with Aleksandr Balandin had to work in open space for more than seven hours.

Whereas, according to the official specifications, our spacesuits could last only six hours. But the work we were doing had to be done no matter what: there was a problem with the hatch in the module and we had to return through an air lock chamber in the core module. And our spacesuits allowed us to do that thanks to our Russian backup.

On attitude to equipment

The Americans have a different approach to equipment. That could probably be attributed to their way of life. Starting from a car, it is easier for an American to buy a new car than to repair an old one. They do not have "garages" in our sense of the word, where we would repair our Lada and Volga cars with our own hands, learning how to fix things, how to fine-tune and adjust them.

One of my U.S. acquaintances did not even know if he had a spare tire in his boot, to say nothing of his ability to replace it, should he ever have to. I think this way of life leaves a mark on everything, including work in space. For example, they would say that it is better to remove an old unit and replace it with a new one.

“Why?” we would ask. “All you have to do it to change the faulty board.”

“Hmm… but to do that, you will need to open the whole unit, to reach that board.” We did have exchanges like that.