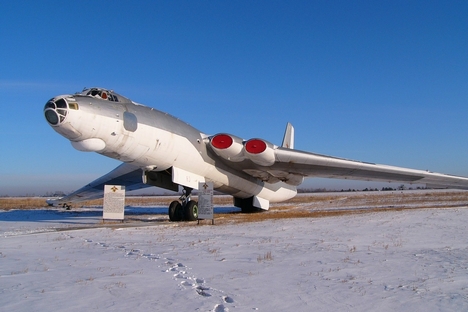 The M-4 became the world's first intercontinental nuclear-capable bomber to enter service, several months ahead of its U.S. equivalent the B-52. Source: Press Photo

A Cold War child and the Tupolev Tu-95's contemporary, the Myasishchev M-4 (N.A.T.O. reporting name Bison) was designed to deliver nuclear strikes on United States’ soil. As it turned out, however, fate held a more peaceful destiny for the aircraft.

Catching up with America

The Soviet Union was four years behind the U.S. in creating a nuclear bomb. Apart from lagging behind the adversary in the size of its nuclear arsenal, the U.S.S.R. had no delivery platform that could reach U.S. soil.

An intercontinental bomber had to have exceptional performance characteristics, and developing one was viewed as an extremely difficult task.

In fact, aircraft designer Andrey Tupolev, when originally approached with the request, categorically refused to take it on and even defended his viewpoint at an audience with Stalin.

In the end, the task of urgently creating an intercontinental bomber was assigned to Tupolev's student Vladimir Myasishchev in 1951. Myasishchev got appointed as general designer of OKB-23 design bureau especially for this purpose.

In his report for the Soviet government, Myasishchev outlined his plan to build a bomber with a range of 11,000 kilometers to 12,000 kilometers and a cruise speed of 900 kilometers per hour. Six months of strenuous work followed, after which Myasishchev approved the design of the future bomber.

Engineers got down to work, in three daily shifts, to build the first prototype, which was ready for its maiden flight in several months' time. The M-4's first, 10-minute flight took place on January 20, 1953. It was followed by 27 more flights as part of the first phase of the factory tests.

A total of 32 production M-4s were built. Three of these crashed during tests, killing the crews. Source: Press Photo

The aircraft could also carry less powerful nuclear or conventional munitions, as well as torpedoes, sea mines, and guided bombs. The aircraft's array of defensive weapons would comprise nine NR-23 or six AM-23 23-mm cannon.

The M-4 became the world's first intercontinental nuclear-capable bomber to enter service, several months ahead of its U.S. equivalent the B-52.

Initial operation of the aircraft revealed numerous design shortcomings, particularly the persisting control system malfunctions. The M-4 was found to be fairly unforgiving of piloting mistakes, especially at takeoff and landing, and the steering columns required significant efforts to operate.

The air-conditioning system was markedly underperforming: the pilots had to fly in warm clothes because the cabin temperature would drop below zero at altitude.

A number of accidents occurred in the first three years of M-4 operations, including six with loss of life. At one point, the pilots' wives came out onto the runway of the M-4 main base at Engels and disrupted the day's flights in protest.

Furthermore, it turned out that the M-4 had to be seriously redesigned to carry a thermonuclear bomb, so a Tupolev Tu-95 was used for the first test-drop of the device.

A total of 32 production M-4s were built. Three of these crashed during tests, killing the crews.

The aircraft's maximum range was an even greater problem: it did not exceed 9,500 kilometers, or half the planned figure. With such a range, the M-4 stood no chance of reaching the U.S., delivering its payload, and returning home.

The only way around this problem was air-to-air refueling. So the Konus refueling system was developed especially for the M-4.

By then, however, the more advanced 3M modifications of the aircraft had been developed. It was therefore decided to convert all the existing M-4s into air tankers. These airplanes remained in service until the early 1990s. In August 1997, the entire M-4 fleet was retired and scrapped.