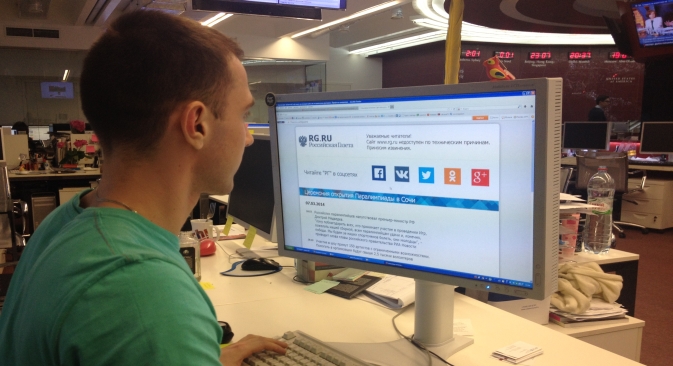 On March 7, the website of Rossiyskaya Gazeta was taken offline by cyber terrorists. Source: RBTH

Hackers have taken down several Russian media website in the past week and alleged attacks on defense infrastructure in response to Russia’s actions in Ukraine.

On March 7, the website of Rossiyskaya Gazeta, one of the largest Russian dailies, the paper of record of the Russian government, and the parent company of RBTH, was taken offline by cyber terrorists. In Google, the publication's title was changed to "pwned by CyberMaidan."

Rossiyskaya Gazeta editor-in-chief Vladislav Fronin said that the site was obviously the victim of a cyber attack.

"There is no doubt that it was hacked. It was done by professionals who first messed around on the site, and then took down the server. They left their mark - Maydanovskaya sotnya (Maidan100),” Fronin said.

In Russia, the Information Security Center (TsIB) of the FSB and the Bureau of Special Technical Measures (BSTM) of the Ministry of Interior Affairs are responsible for handling cyber threats.

The TsIB fends off foreign intelligence services, extremists, and criminal organizations in cyberspace, and the BSTM mainly investigates computer crimes.

The Kiber sotnya organization, which is suspected in the hacking, posted a denial on its Facebook page stating that while they “stand up to Russian propaganda,” they do not “deserve the credit for hacking the Rossiyskaya Gazeta site."

Russian anti-virus company Kaspersky Labs, a global leader in cybersecurity, announced that it was investigating the attack at the request of Rossiyskaya Gazeta.

This is the not the first instance of hack attacks on media associated with the Russian government. On Sunday, March 2 the website of TV channel RT was also attacked by cyber terrorists, who posted inflammatory headlines on the homepage.

"They hacked the administrator's access. Control over the site has been restored," a spokesperson for the channel said.

According to a message from Anonymous posted on Cyberguerilla.org, the hackers are determined to disrupt the infrastructure of the Russian defense industry as much as possible.

Anonymous writes that they have also managed to infect computers from Oboronprom, Sukhoi design bureau, Gazflot, UC Rusal, Veles-Capital, and others with viruses.

Vitaly Kamlyuk, a leading antivirus expert at Kaspersky Labs said that the increasing reliance of companies on technology also increased their vulnerability

"It is clear that our dependence on technology, as well as the enormous computing power of today's computers, have made us potentially vulnerable to attacks on very diverse targets. We have already seen Anonymous act in other countries. And, despite all the measures that have been taken, cyber attacks will most likely continue in the future," Kamlyuk said.

IlyaSachkov, CEO of Group-IB, which specializes in cybercrimes, thinks that the hack attacks have already crossed the line into actual cyber warfare.

"The war is already underway, and its main goal is to attack public opinion," Sachkov said. "Informational resources like social networks, blogs and microblogs are used to create turmoil and confusion."

But not all experts agree. "It is hardly appropriate to call it a cyberwar, in this case it is more likely hacktivism. This is a form of cyber attack used as a political or social protest.  It is much easier to attack a government website or the media than to organize a real protest or demonstration. Hacktivists begin to be particularly active during tense political events. That is what we are seeing now, in light of what is happening in Ukraine," said Kamlyuk.