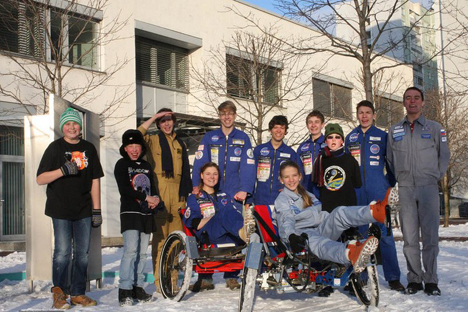 A Moscow schoolgirl has become one of three Russian wunderkind to take part in an international competition to test-run a NASA Rover Challenge-2014 space transporter, after designing a prototype of a spacecraft capable of traveling at speeds of 30,000 km per second.

A 13 year-old schoolgirl from Moscow is to fly to the U.S. to take part in an international competition for young engineers and researchers to design a space transport. Katya Trusheva attracted the attention of organizers with a model of a spacecraft she designed herself, which was exhibited at the MAKS-2013 airshow at Zhukovsky near Moscow.

Her project caught the eye of Ralf Heckel, director of the International Space Institute in Germany, and later attracted the attention of NASA employees. Now she is participating in the international Human Exploration Rover Challenge, taking place in the U.S. from 10 - 12 April 2014.

The schoolgirl’s invention, the Zemlya spacecraft, is capable of reaching the nearest star to Earth, Alpha Centauri, in 42 years instead of 50,000 years.

In her report on the spaceship, Katya made reference to the famous American researcher Geoffrey A. Landis. It was thanks to Geoffrey Landis that the ‘Viking’ American interplanetary probes were the fastest objects ever launched into space, traveling at a speed of 15 km/sec.

Theoretically today’s technology makes it possible to create an engine capable of reaching speeds of 30 km/sec. Calculations show that it would take a spacecraft approximately 50,000 years to reach Alpha Centauri, which is situated around 4.5 light years from the sun.

The idea to create a spacecraft came to Katya when she was studying in the 5th grade. In a natural history lesson she learnt that several billion years from now the suncould be transformed into a huge ball of fire the size of our galaxy.

“What will become of the people, animals and everything on our planet? We have to work to save everyone now!” said Olga Trusheva, Katya’s mother, at a press conference held after the MAKS-2013 airshow, explaining how the idea came to her daughter. The Zemlya spacecraft was thus born of a desire to save life on Earth from future catastrophe.

“I think that my project is entirely feasible; today enormous sums of money are spent and huge quantities of fuel are used to launch spacecraft. I am proposing a spacecraft that does not require any fuel from Earth,” explained Katya at the press conference.

Her spacecraft only exists in prototype form as a model 95 x 65 x 45 cm in size, which is 1,000 times smaller than the proposed craft. All the calculations and technology that Katya used in her project are based on fundamental scientific research. However at present technical development prevents all the resultant research work from being brought to fruition.

According to Katya’s plan, the spacecraft would be assembled in near-Earth orbit. It would be fitted with a mass intake with magnetic and electronic focusing systems, a continuous flow thermonuclear engine with electromagnetic propulsion, photon drive with an electron reflector, an electron acceleration system and a set of onboard auxiliary systems. It would be launched from Earth orbit.

The fuselage of the spacecraft

The fuselage of the spacecraft would be assembled from light composites and carbon materials. Heavy metals would only be used in the radiation protection system, whilst light metals would be used in the very high-pressure elements of the design. Some parts of the spacecraft would be manufactured from corrugated board, and the material to produce this would be mined in space itself. According to the young designer, there are enough comets that are similar in composition to produce the required material in space from the matter found in these comets.

How fast will it fly?

The spacecraft should be able to produce a very high speed, more than that of today’s contemporary rockets, approximately 30,000 km/s (the fastest rockets in operation now only have a top speed of some 15 km/s). Thus, according to preliminary data, a flight to Alpha Centauri, which is the nearest stellar system, would take 40-50 years.

Energy from the sun

The main problem that would need to be solved in order for a galactic flight to become a reality is how the craft would be powered. The Zemlya spacecraft is not permitted to take any energy sources with it into space. The craft will use the environment around it as fuel, which allows its weight to be significantly reduced, enabling it to reach very high speeds. The interstellar environment, which consists of 70 percent hydrogen, would be trapped by a special magnetic funnel, compressed by the mass intake and heated up by a thermonuclear reaction, would accelerate and then be ejected out again into interstellar space.

We can win the race

Katya Trusheva and the other competitors in the international competition will arrive at the Space & Rocket Center in the U.S. on 5 April for Human Exploration Rover Challenge.

The first few days will be dedicated to assembling Moonbuggy, a space transport designed to move around any planet, as well as training in the location in which the competition is due to take place. Between 10-12 April races will be held between Moonbuggy teams. The rest of the time will be spent dismantling the space transport. The Russian team is made up of 13 year-old Katya Trusheva, 17 year-old Vadim Korsunov and Denis Sukharyov.

The competition, formerly called Moonbuggy Race, has been held every year since 1994. Russia traditionally enjoys a leading position in this competition. In 2011 a Russian team of students from the MAI (Moskovsky Aviatstroitelny Institut – the Moscow Institute of Aircraft Production) took first place in the Moonbuggy Race 2011 in the International Award nomination.

This is abridged version of the article first published in Russian in Moskovsky Komsomolets.