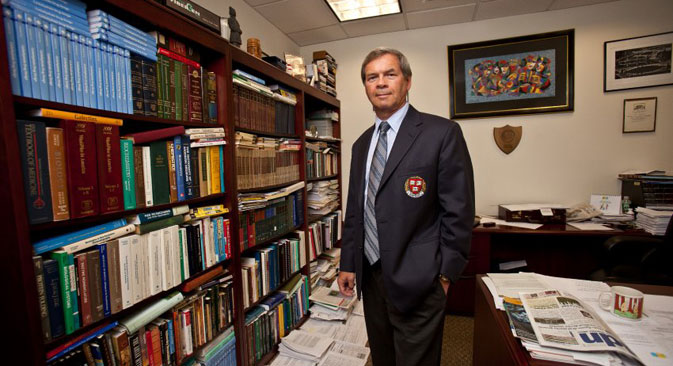 Anatole A. Klyosov: 'In those days there was romance in the use of the computer.' Source: Personal archive

This year marks 20 years since the internet first appeared in Russia. The first Soviet internet user, the well-known Soviet-American scientist Anatole A. Klyosov, speaks about the internet in the USSR, espionage and the surreal logic of history in an exclusive interview with RBTH.

Invitation to a beheading?

It was early fall in 1982, and I was invited to participate in the First World Computer Conference on Biotechnology. Strictly speaking, the invitation was not addressed to me; it was sent to the government of the USSR, and came from the UN. Biotechnology was at the peak of its importance at the time in the USSR as well, and therefore the letter from the UN did not go unnoticed.

The letter mentioned my name: The organisers of this computer conference proposed that Professor Anatole Klyosov, a renowned biotechnology expert, be the moderator of the conference on the Soviet side. I was 35 years old at the time.

At the time I was a “nevyyezdnoy” [i.e. a person not permitted to travel abroad for reasons of security and alleged disloyalty – Ed.]. It was suspected that when I had been in the U.S. on an internship in 1974, I was recruited by the CIA.

Anatole A. Klyosov is a Soviet and American biochemist who is a specialist in the fields of polymer composite materials, biomedicine and enzymatic catalysis. He is a Doctor of Chemistry of the USSR, a professor, a laureate of the State Prize of the USSR, a member of the American Chemical Society, and a member of the World Academy of Art and Science.

This was perfectly logical for the Soviet ideological machine. It was simply a kind of surrealism – I was the alleged CIA agent who was instructed to implement the first contact with international computer networks.

I was called up and given instructions; as my name was mentioned in that letter from the UN, it was me who had to sort out whether the country could – technologically – take part in the First World Computer Conference. And if we could do it technologically, the question of whether our country needed this would be considered. "Go for it!" they said to me.

I was not told, however, how to proceed. So I just started to look for someone who would be called a "provider" today. At that time, no such word existed. After some searching, I found out that there was an institute in the centre of Moscow with the name, abbreviated in Russian, of VNIIPAS (which stands for the All Union Scientific Research Institute for Applied Computerised Systems), and contacted its director.

It turned out that they were already waiting for me. The director of VNIIPAS told me that he had been called and told that a man would be sent who had been tasked with dealing with computer conferences. This was also surreal.

I was given carte blanche to work at the secret center, to which I could come at any time and work as much as I wanted to. I was provided with a computer terminal and a technician – a pretty young girl who was assigned to me to resolve any possible technical problems.

In the meantime, I received a copy of the letter from the UN with an explanation of the procedure for accessing the computer network, the login address and password. When I first typed in the login (with the help of the VNIIPAS specialist; I didn't in fact know what a “login” or “username” was), then, of course, I was somewhat shocked when the screen lit up with the words "Stockholm University welcomes you". The chair of the computer terminal seemed like a cosmonaut’s command seat to me.

I started to come to VNIIPAS since several times a week it was my job to get training in international computer communications, and became accustomed to being frequently “kicked offline”, as well as establishing personal ties with other network users.

In 1983, when I had already become familiar with the network, I learned that a total of approximately 380 people in Europe were using these international networks. At 5 p.m., they all went home, and only four or five people were still on the network at that time including me, as I often worked in the evenings.

When the сonference was held in December 1983, the Soviet participants were not under surveillance. There were 10–12 people whom I had chosen and invited to VNIIPAS. We transmitted technical information without any preliminary clearance (for printed publications, this procedure would have taken several months to complete).

Getting babushka to Skype

It was really surreal for all the participants. At first, nobody could believe that everything was so simple – just type your text on the keyboard, press a button, and your information goes abroad right away. At first everybody asked me: “Will they jail you or not?”

However, after the conference, they simply forgot about me. No order to clear the room was given, so I kept coming to VNIIPAS as if to work, and did so for seven years, until the end of 1989. I then went to work in the United States, at Harvard University.

Another surreal thing had been happening to me over the final couple of years: From 1987 to1989, I worked with a computer from my apartment in the Olympic Village in Moscow. I bought this computer in the U.S. when they finally began to allow me to travel abroad after Mikhail Gorbachev came to power. A modem was given to me as a present by VNIIPAS; it was the size of a thick book.

A lot of dramas were going on at that time. Incriminating articles in newspapers were reporting attempts to smuggle banned literary works, secret information or information "for official use only" out of the country or into the country.

Technologically, I could have transmitted tons and tons of such information. It would not have been possible to prove that I had not done that. So they could easily have arrested and imprisoned me, but I did not think much about this bad scenario. I hoped that the danger would just pass, and as it turned out, everything was fine.

Then, now and afterwards

I must say that the general public had no big interest in computer communications at that time. Even at the Academy of Sciences and the university, people, once they got to know my passion, asked: “Do you really need that thing? You are simply wasting your time.”

Some would ask where my interest had come from in view of the fact that people didn't have computers. I would reply that people did not have spaceships in their households either, but there was huge interest in space.

Nowadays, technology has progressed hugely, and almost everyone has the internet. In contrast, I started to use the internet when it was not yet a mainstream thing. In those days there was romance in the use of the computer.

There were no graphics, and we drew Christmas pictures out of noughts and crosses with Christmas trees and glasses of champagne, from which something like sparkles and bubbles popped up. In general, at that time, we really appreciated those network communications, and they were filled with significance.