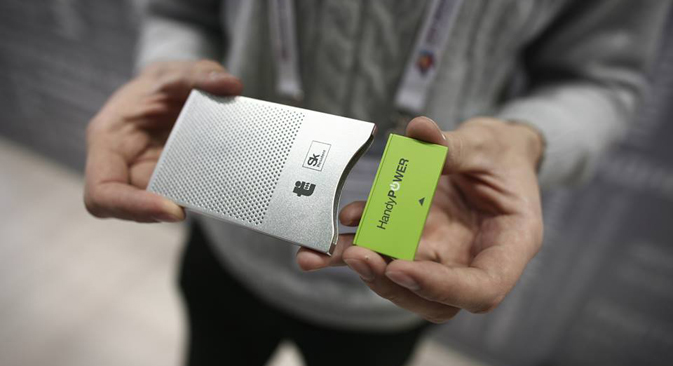 it took him about 15 years to develop and build the first prototypes of the batteries. Source: Grigoriy Sisoev / RIA Novosti

Developers with the Russian start-up HandyPower have created a portable hydrogen-powered battery for use with various devices and gadgets. The manufacturers promise that their product will be ecological and long-lasting.

Yevgeny Shkolnikov, director of the alumohydrogen energy laboratory of the Russian Academy of Sciences, has developed a portable hydrogen-powered battery for gadgets. The fuel cells will be marketed by a start-up named HandyPower.

With the help of this device, any gadget can be charged using a USB cable. The battery itself consists of two simple elements: activated aluminum and water.

According to Shkolnikov, it took him about 15 years to develop and build the first prototypes of the batteries.

The fuel cells used in the cartridge have been around for 100 years already. However, hydrogen, which powers the charging, is explosive and is normally stored in gas cylinders. Shkolnikov discovered a solution that he says is safe and advantageous: Store the hydrogen as a liquid and then isolate it using chemical reaction.

“Aluminum, by reacting with water, acidifies and isolates the hydrogen. The hydrogen, passing through a membrane of the fuel cell, immediately turns into a watery vapor. At that time, electric current is produced in the membrane,” he explained.

“For 20 years, the world’s best minds were not able to appreciably lower the cost of a kilowatt of energy taken from hydrogen fuel,” said Boris Pospelov, managing engineer of the Urals Electrochemical Integrated Plant (UEIP).

“The design developed by Shkolnikov is extremely interesting; however, I doubt its economic expediency,” he added.

The project has now received more than 5 million rubles ($140,000) from the Dubna and Sigma Novosibirsk nanotechnology centers as well as a grant from the Bortnik Foundation, which helps startups with seed funding. However, the company plans to attract another $140,000.

According to the predictions of Pike Research, an energy sector research firm, the large-scale distribution of fuel cells for portable devices will start in 2015, and the market will grow from $185 million in 2009 to $2.3 billion in 2016.

Novosibirsk physicists start up $14 million synchrotron in U.S. amid sanctions

The emergence of new technologies and materials is expected, making fuel sources for power supply sufficiently cheap and ecological that they could become an alternative to traditional batteries.

In 2015, the level of global market penetration for portable fuel cells could conceivably reach 14 percent.

Right now, countries all over the world are occupied with the idea of creating new, portable energy supplies, and the HandyPower project has many competitors. The American company Lilliputian Systems used a similar cartridge concept, but without using hydrogen.

One removable cartridge makes it possible to charge a telephone for two weeks without plugging it in. Incidentally, Rosnano, the Russian technology company, invested about 820 million rubles ($23 million) in that project.

There is also the Swedish model, myFC.  This device generates electricity from water, but the water has to be poured in separately.  One such “refueling” is enough for an entire recharge of a telephone.  The Japanese Aquafairy requires water to be poured in independently as well as cartridge changes.

“The Russian portable battery market is just barely taking shape, and one can surmise that it will grow at an unbelievable speed and power supplies that are affordable and practical to use will be a timely solution for users,” said Aleksei Korostelyov, manager for TopDevice in Russia.

He added, “Right now there are already a number of different companies working in this sphere.  Some of them, the Asian manufacturers in particular, have obvious advantages.  There is a ton of competition in the marketplace, and I have yet to hear about cheap hydrogen.”

The basic elements of the battery — aluminum and water — are some of the most widespread in the world. The device will cost approximately 1,500–2,000 rubles ($40–55) and removable cartridges only a few cents a piece.

They are also distinguished by their ecological compatibility and “eternity”. Even after dozens of years you can take a cartridge, put it in the device, and the reaction starts; the battery does not require regular use.

Another very important difference is the fact that the HandyPower battery does not have to be charged; in other words, it does not need access to electricity.

According to Ilya Kalashnikov, innovation manager at HandyPower, if everything goes as planned, mass production of the batteries will allow the company to recover all expenses on its development in only two to three years.

“In the future, we want to embed our solution in hundreds of other devices and work on that which we do best, the packaging of energy,” said Kalashnikov.

“We think that here in Russia there is a good energy opportunity. Who knows? It’s possible that in a year they’ll be selling ‘wafer disks for charging phones’ along with gum and chocolates in all the kiosks,” he added.