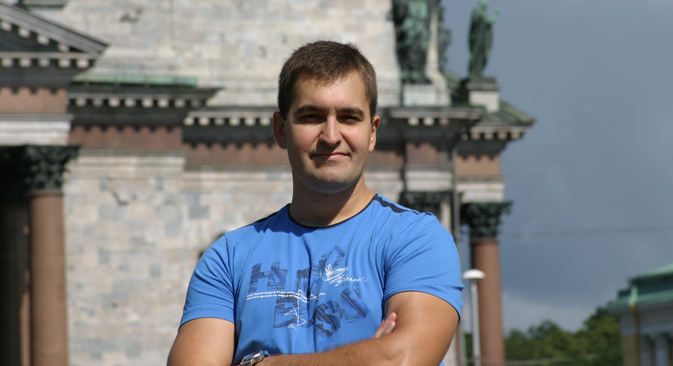 Alexander Artyukhin, the founder of the project. Source: press service

While planning for a European trip, Russian entrepreneur Alexander Artyukhin spotted a gap in the market for independent travel planning services. As a result he set up his own startup aimed at helping clients organize the details of their trips abroad, from hotel bookings and tickets to local recommendations.

As Alexander Artyukhin was setting out on a long trip around several European countries nine years ago, the idea of creating a service which would help people to organize their own travel occurred to him. But although it took until 2011 for the idea to come to fruition, his project is now taking off.

Artyukhin’s brainchild, website YouRoute (www.youroute.ru), is an internet service for independent travel planning. The resource includes detailed travel guides for towns and countries, a route planner and a meta-search engine for airline tickets, hotels and car hire, recommendations from seasoned travelers and answers from experts.

The initiative was launched in 2011 and in December 2013 was given an A rating by Russian Startup Rating (RSR), a rating facility for start-ups developed in conjunction with Russia Beyond the Headlines (RBTH).

According to Artyukhin, the aim of the company over the next two or three years is to become the trend-setter in independent travel planning for high-end clients.

The target audience for the initiative was Russia, where the travel market is developing rapidly and the number of independent travelers is growing by 40 percent every year.

Considering the state of the travel services market, the YouRoute enterprise might appear something of a gamble.

“The number of Russian citizens purchasing travel services online is growing every year. In fact, online travel is the fastest-growing trend today,” reckons Alexandra Sizintseva, CEO of one of the largest on-line services for travelers, Biletix.

“However, the bar for start-ups in the Russian market is pretty high. There are already a number of large players who are difficult to compete with. As well as that, the overall market growth rate has slowed considerably, with the result that only a very few of the majority of Russian travel start-ups will survive,” says Sizintseva.

According to Artyukhin, the service had to offer something to make it stand out from the competition, and its winning card was an interface tailor-made to fit the demands of its users.

If the program sees that the distance from one town to another is more than 500 km, or that the geographical locations are such that air travel is the only option, then it will offer the facility to purchase a plane ticket: The service has its own meta-search engine for airline tickets, linked to the ticket offices of major airlines. On the other hand, if necessary, facilities for finding and booking a car are also available.

Finally, using pre-set criteria, the program can shortlist hotels in selected towns – this service is offered in collaboration with Booking.com. Then, once the journey has been ‘compiled’, it can be saved in your own personal library, or published on the site for all to see.

For the route planner, the project team decided to create their own unique content. A search was carried out for people living in various countries who could write something suitable about the sights worth seeing there. Starting with Europe, the project spread within a year to include the whole world: The major cities and regions of 192 countries are now described by the service.

The website clocks up about 10,000 individual visits per day. The main source of income for the company is the sale of airline tickets and the provision of hotel booking services within its partnership programs, but it has not yet made an operating profit and currently covers about 70 percent of its costs.

Although YouRoute is still looking for investment, the founders of the service are currently in negotiation with several investment funds.

In view of the saturation of the market for tourist services and the general economic downturn, experts have offered differing assessments of the company’s prospects.

“You could say that YouRoute is one of the lucky few. A sound promotional strategy based on useful and interesting content and the recognition of a niche opportunity for a global travel service in the Russian market have certainly given them a strong hand,” observes Sizintseva.

On the other hand, Yury Shabunin, director of the independent agency Smart Solutions, notes that the project is likely to run up against problems specific to the travel industry, such as the seasonal nature of demand, and also the problem of loyalty.

“It has to do with the fact that travel firms are basically selling exactly the same services and it’s hard for them to distinguish themselves by any other means than offering the user the opportunity to get something at a cheaper price,” Shabunin says.